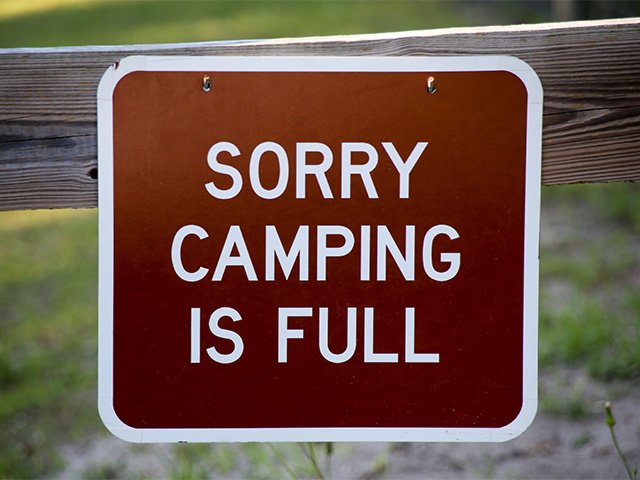 Jacquie Ainslie typically camps in Wisconsin’s state parks several times from the start of summer through October. She books her trips in January, the earliest date she can for the date she wants to go, but nabbing a site has become more difficult since the state implemented its new system, Wisconsin Going to Camp, in 2018, she says. And this year was particularly challenging.

“We could only find one site at one of the state parks, Point Beach,” says Ainslie, who lives in New Glarus. “We could find stuff during the week but forget weekends.”

Stephanie Solverud is also frustrated by the fraught search for available campsites. But she gets even more worked up by what she sees in the campgrounds once her family sets up camp. She says some of the very sites that were unavailable at the time of booking are unoccupied. And while it’s common for campgrounds to have vacancies during the week, these sites will sit empty through the weekend. This scenario has become more common in the last five years, she adds.

“I walk around the campground throughout the week that I’m there, and I see 10, 20 empty sites and they’ve been empty all week,” says Solverud, who is from Beaver Dam. “I have been to Peninsula and Crystal Lake, you know, really popular sites, and the weather is gorgeous. It’s not those rainy, cold weekends.”

Wisconsin Going to Camp replaced the reservation system provided by Reserve America. According to Chris Pedretti, section supervisor for business operations at the Department of Natural Resources, the new software is more functional for both the user and staff and is used by other states, including Washington, Maryland and Washington, as well as Parks Canada and Canadian provincial parks.

Pedretti and Corrina Regnier, campaign program manager for the DNR, acknowledge that it is becoming more difficult to find sites, especially on desirable holiday weekends; electric sites are also hard to book. Regnier says there is still a no-show policy in place, but this requires staff to physically go into the parks to check the status of campsites.

“For the most part, we are able to catch those empty sites and release them back for anyone else, but there are times when [sites] — especially that first night of a reservation — just don’t get used,” she says. Campers must be at the campsite by 3 p.m. on the second day of the reservation, leaving wiggle room for campers who may be running late due to unforeseen circumstances or weather-related reasons.

Reserve America required reservations to be made 48 hours in advance. Those who wanted to head out on a last-minute trip often had to take their chances on a non-reservable site (sites that were available on a first-come, first-served basis), which was risky if you had to travel a considerable distance. It also took longer to make canceled sites available to the public. Going to Camp offered improvements in navigation, a new notification system, same-day reservations, real-time availability updates, and better campground mapping features to simplify the booking process; it’s also $2 cheaper for the camper.

Regnier says one way to land a site is to expand your options. “There are folks who have maybe been camping for years and years and years at some favorite park,” she says, “but we have some less popular parks that are still very beautiful and often have more availability. I think our reservation system makes it easy for you to check out the whole map and see what’s nearby.”

Reservations booked before May for stays from mid-May through October require a two-night minimum, a rule governed by state administrative code that is intended to reduce the number of campsites that go unused during the busiest season. If a family wants to camp for the weekend but can’t find two consecutive nights on a single site, there is an option in the system that can help with planning one night at multiple campsites, says Regnier. Those sites have to be booked after May 15.

Mark Szmidt of Milwaukee has been camping in Wisconsin’s state parks for about 10 years and has no complaints about the reservation system. He attributes that to his flexibility and admits that he will go wherever — and at any time — a site is available at the time he books. He prides himself on visiting the less popular campgrounds in the state park system and recommends other campers do the same.

Those who have trouble booking sites, says Szmidt, are looking for something “super specific and it’s not there. And [they think] it’s the system’s fault.”

As the COVID-19 pandemic forced people to find safe and alternative hobbies, interest in state park camping increased significantly. The hike in reservations happened even as the pandemic forced the closure of state parks from March through June 10, 2020. The state implemented no-contact check-in and the conversion of non-reservable sites to reserve-only sites during this time.

Pedretti says the demand for campsites was increasing even before the pandemic. According to DNR records, more than 150,000 campsite reservations were made in 2019. That jumped to more than 200,000 in 2020, a 28 percent increase even with the closure of parks early in the summer. Reservations increased again in 2021, with roughly 246,000 bookings, a 21 percent increase from the previous year.

Campers Ainslie, Solverud and Szmidt belong to the Facebook group Wisconsin State Parks; many of its 112,000 members turn to the group to voice concerns about the reservation system and to seek advice.For most, the problem is not the system but the inconsistent policy enforcement and absence of human connection at the parks. (Some of these concerns stem from the COVID policies put in place in 2020, including the removal of the non-reservable sites.)

Even so, the difficulty of reserving a site at their favorite campsite has turned off some to state park camping.

“I love [the state parks] and so appreciate them being there, and I really think people have no idea how awesome Wisconsin state parks are,” says Solverud. “But we actually decided to go on a road trip this year. It is so frustrating.”

[Editor’s note: this article has been edited to reflect that reservations do not open in January; they open 11 months before the date of the desired camping.]