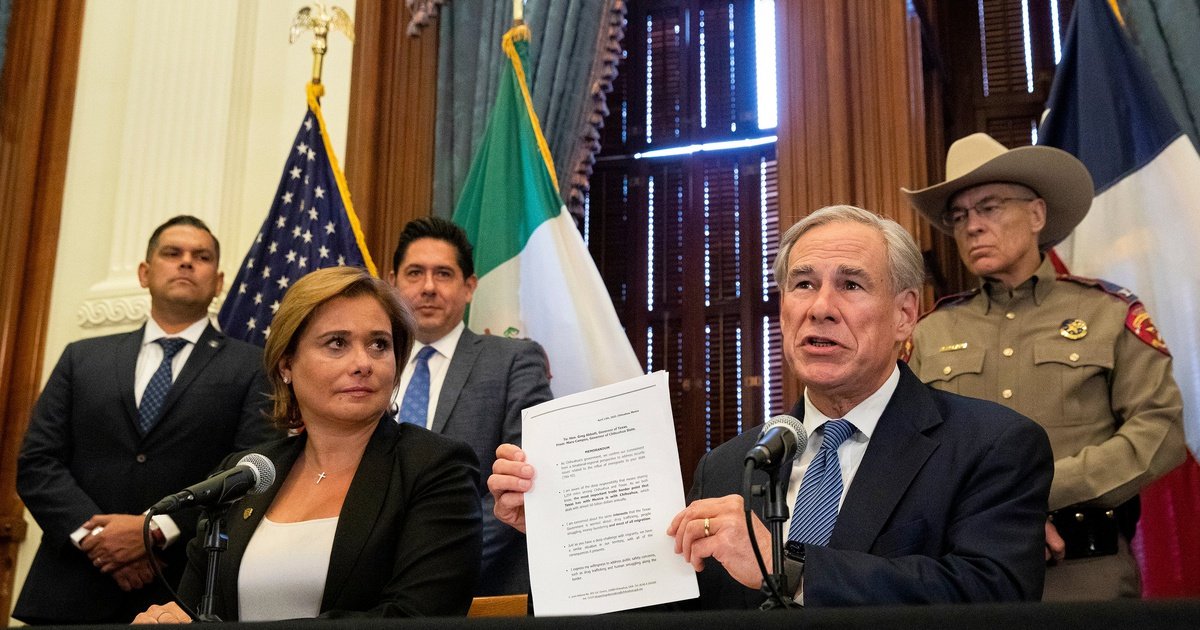 The two deals came a day after Abbott reached a similar agreement with the governor of Nuevo León, the Mexican state that shares a narrow sliver of border with Texas that includes a major commercial bridge outside of Nuevo Laredo.

Last week, Abbott ordered Department of Public Safety troopers to inspect every commercial truck for illegal drugs and immigrants as they crossed at least four international bridges as a response to the Biden administration’s plan to end Title 42 — a pandemic-era rule by the U.S. Centers for Disease Control and Prevention that allows federal immigration officials to turn away recently arrived migrants at the U.S.-Mexico border, including those who are seeking asylum.

Title 42, implemented in March 2020, is meant to be used to prevent the spread of the coronavirus. But Republicans have said the rule is still needed to keep order at the border, which they say has been chaotic as a result of the Biden administration’s immigration policies.

Last month, Campos Galván met with CBP Commissioner Chris Magnus and U.S. Ambassador to Mexico Ken Salazar in Washington, D.C. In the meeting, she told them her administration installed cameras with facial recognition and license plate reading technology to monitor vehicles entering Juárez, where drug cartel violence has plagued the city for years. She also said she ordered the move of the police headquarters from the state capital to Juárez.

During the news conference on Thursday in Austin, she said her administration would share intelligence with Abbott’s office over any security issues.

Abbott agreed to halt state troopers’ inspections of commercial cargo at the Laredo-Colombia Solidarity International Bridge after Gov. Samuel Alejandro García Sepúlveda agreed to increase security on the Mexican side of the bridge.

In a news release, Abbott said the agreement with Coahuila is similar to deals with Chihuahua and Nuevo León. According to a statement from Riquelme Solís’ office, his state’s police and immigration agents will continue to find migrants before they enter Coahuila and seize illegal drugs.

As part of the agreement, “Texas recognizes that cartel crime rates are very low in Coahuila, due to the security measures implemented,” Riquelme Solís’ office said.

The governor of Tamaulipas has also reached out to Abbott seeking meetings to discuss ending the enhanced state inspections.

Abbott said during the news conference earlier Thursday that he plans to meet with the governor of Tamaulipas on Friday.

On Tuesday, governors of Coahuila and Tamaulipas sent a letter to Abbott telling him the inspections are “overzealous” and criticizing his move as political grandstanding, saying, “political points have never been a good recipe to address common challenges or threats.”

The inspections have resulted in hourslong and sometimes dayslong delays for shipments from Mexico, including produce, auto and medical equipment and other items purchased by American companies.

During a Wednesday news conference in Laredo, Abbott celebrated the agreement with Nuevo León, saying, “Sometimes it just takes action like that to spur people sitting down and working things out like the way that they are beginning to work out,” Abbott said.

But a security expert and an official with the Tamaulipas government say the security measures Nuevo León has put in place are only a short-term solution. Drug cartels adapt to whatever security measures both countries implement and eventually find ways to smuggle migrants and drugs, they both said.

The Mexican government also has a culture of corruption, so it’s not unusual for cartels to bribe police or other officials to let loads of drugs and migrants through, said Adam Isacson, director for defense oversight at the Washington Office on Latin America, an advocacy group for human rights in the Americas.

“If you take a place like Nuevo Laredo, the Northeast Cartel pretty much controls everything,” he said. “Just installing a few new roadblocks won’t make much of a difference.”

As an example, he pointed to the arrest last month of Juan Gerardo Treviño-Chavez, also known as El Huevo, the leader of the Northeast Cartel, which triggered gunfights throughout Nuevo Laredo between cartel members and the Mexican military. Cartel members also set 18-wheelers on fire on a key road into the city after his arrest.

On Wednesday in the Rio Grande Valley, news organizations in Mexico reported that members of a drug cartel had set fire to four 18-wheelers near the Pharr-Reynosa bridge. The McAllen newspaper The Monitor reported that drug cartel members set the cargo ablaze to force truckers to end their blockade in protest of Abbott’s added inspections.

“This is the way [drug cartels] put pressure for them to be able to continue … their illegal activities,” said Francisco Galván Garza, who works in the administration of Tamaulipas Gov. Francisco Cabeza de Vaca.

Galván Garza said any agreement between Tamaulipas and Texas will solve the border delays only on the Texas side.

Ultimately, he said, the federal governments of Mexico and the United States need to step up and find a solution to immigration. He said if Tamaulipas heightens its security measures even more, drug cartels will find ways to bypass them.

Cabeza de Vaca “has been putting all his effort on securing the state during his five years in office,” he said. “The state has been more secure, but there’s still a lot of work that has to be done.”