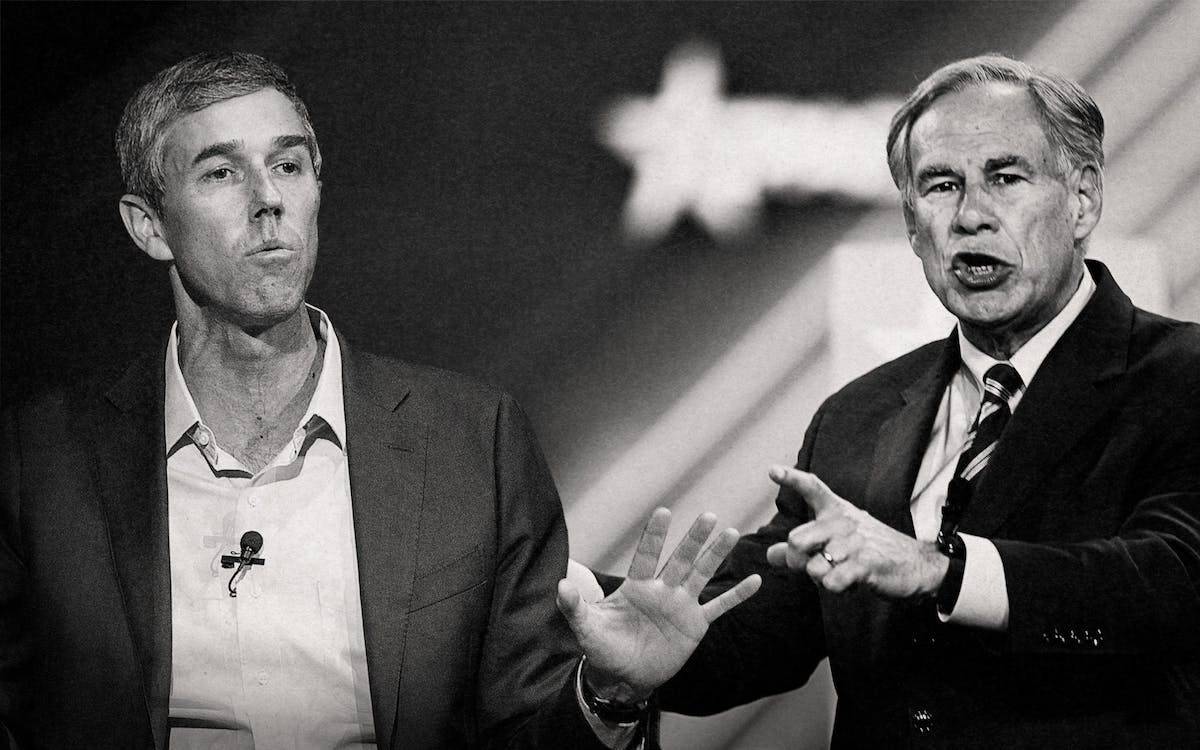 When I tuned into the Texas gubernatorial debates a few minutes early, catching the tail end of Wheel of Fortune, I caught the part where Pat Sajak and Vanna White typically engage in some light banter. The last thing Sajak, a Hollywood-ish 75, said to White before the TV gods cut to the debate between Beto O’Rourke and Greg Abbott was this: “All my teachers . . . are not watching.” Before I could process the jarring interjection of mortality into Wheel, the hour-long Texas gubernatorial debate was underway. Held at the University of Texas Rio Grande Valley in Edinburg, the debate was billed by its media sponsor, Nexstar Media Inc., as “The Heat Is On.” Early on, the camera panned past the three main moderators, showing an empty hall behind them. No teachers, or anyone for that matter, watched in person. (O’Rourke said one of Abbott’s conditions for the debate was the lack of a live audience, which the governor said had been agreed to months ago by both campaigns.) There was no heat in the hall.

Debates are generally treated by political professionals and the media as important events in the democratic process. And yet, in the past twelve years—over four gubernatorial races—three of the four gubernatorial debates occurred on a Friday night during football season in Texas. (In 2010, Rick Perry refused to debate altogether.) This suggests that the candidates—at least some of them—do not want them to matter. Scheduling a single, hour-long, audience-less debate during Friday night lights is not a scenario that invites broad public attention; it’s a perfunctory nod to the idea that informed citizens deserve to see candidates directly engage each other. And yet the ritual requires that a winner and loser be declared. How else to prove that the debate matters than to crown a champion?

So who won, Abbott or O’Rourke? If I must give an answer, it is this: let’s call it a draw . . . which gives Abbott the edge because of how much ground O’Rourke needs to make up in order to be the first Democrat to win a statewide race since some of y’all were in diapers. Tonight’s mano a mano, at least by Texas gubernatorial standards, featured two veteran campaigners well versed in their positions and confident in their antagonisms. It was not the sad spectacle of 2018, when Greg Abbott had nothing to fear from the hapless Lupe Valdez, the former Dallas County sheriff, and yawned his way through the debate and toward a thirteen-point victory.

Over his last two failed bids, for U.S. Senate and president, O’Rourke has become a more conventional politician, which means he knows how to stay on message. He returned again and again to the theme that Abbott should have to own all the state’s failures, including ones the governor wants to pin on O’Rourke, such as rising crime rates. The disastrous grid failure in winter 2021, the extreme anti-abortion laws, the horrors of Uvalde and other mass shootings, even rising crime rates—that’s on Greg. “I just want to remind viewers,” O’Rourke said at one point. “This guy has been governor for eight years.”

Abbott, for his part, got a lay-up early on, with the moderators spending the first fifteen minutes of the debate on the border and immigration—what the governor’s political adviser and New Hampshire–based cynic Dave Carney might call a winner for Abbott. The guv was able to fall back on some poll-tested conjuring words (“Joe Biden’s open border policies”) and enjoy the optics of the moderators playing a clip of New York mayor Eric Adams complaining about Abbott busing migrants to his city.

As the debate turned to issues on which Abbott has underperformed—such as preventing the slaughter of children by gunmen or “eliminating all rapists”—he tried a different tack: calling Beto a liar and hiding behind lawyerly proceduralism. (He can’t support raising the minimum age to purchase an AR-15 from 18 to 21, a policy that’s widely popular in Texas, because the U.S. Supreme Court might knock the law down.) By the end of the debate, prompted by a question about whether he had shifted to the far right, Abbott became particularly bold, reinventing himself as a man of deep conviction: “I’m governing from my principles,” he said. There was no one in the audience to cheer—or guffaw.