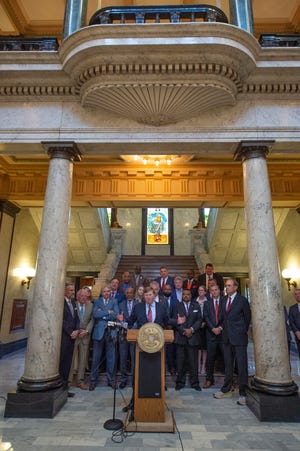 Mississippi employers have added nearly 22,000 jobs over the course of 2022 as hiring has remained sturdy despite rising interest rates, high inflation and mounting recession worries.

According to the Mississippi Department of Employment Security, the Magnolia State is slated for even more growth in 2023 with an expected 3.8% growth rate or more than 44,000 jobs to be added to the economy.

The 22,000 additional jobs for 2022 includes a loss of nearly 2,700 jobs that occurred in November when United Furniture Industries in Northeast Mississippi informed all of its workforce they no longer had jobs. The 22,000 is more than the 16,000 that was projected by the Mississippi Department of Employment Securities earlier this year.

In 2023, MDES expects the largest percentage of job creation be for industrial production managers as well as transportation, distribution and storage managers.

The largest decrease by percentage in their field is projected to be education administrators, elementary and secondary school positions, which could be down by as much as 6.1%.

Payroll employment in Mississippi increased 2.5% in 2021, which was the largest annual percentage increase since 1995. The job increase is the most for Mississippi in one year since 1994.

Job recovery in Mississippi is ahead of the U.S., as payroll employment for the nation had not increased at the same levels.

Service sectors are a proportionally smaller part of employment in Mississippi compared to most states and the nation. The latest forecast, however, is employment in Mississippi will finish 2022 with as increase 1.4%, less than in 2021 but well above annual increases prior to the pandemic. In, 2023, that number could be higher as jobs are likely to be back to pre-pandemic levels with nearly 132,000 people at work, an increase of 2.1%.

Overall in the United States, there were more than 263,000 jobs added in November.

There is more good news in the near future in Mississippi as an aluminum production facility in Lowndes County plans to invest $2.5 billion into the area, the largest economic development in the state’s history, and according to its agreement with the state the project will employ 1,000 people with an average salary of $93,000.

“Last month, we finalized the largest economic development project ever in Mississippi,” Mississippi Gov. Tate Reeves told the Clarion Ledger. “The $2.5 billion corporate investment will create 1,000 jobs with an average salary of $93,000. Long story short, if you want a job in Mississippi, there’s one waiting for you.”

Hinds County, which has struggled to bring corporate and industrial jobs in recent years, has seen moderate gains with expectations of more announcements in the coming months.

Berk Enterprises said Jackson is the perfect place for the company to expand.

The family-owned supplier of disposable food service and concession products is locating its second warehouse and distribution center outside of Ohio in the Northwest Industrial Park along Beasley Road.

There will be as many as 40-50 jobs associated with the distribution center.

“Over $6 billion in new corporate capital has been invested into Mississippi this year alone,’” Reeves said. “That’s a record, and it vastly outpaces the ten-year average of $900 million per year before I became governor.”

Rolls-Royce still has jobs to fill on the Gulf Coast as it recently opened a multi-million-dollar facility to build propellers for the U.S. Navy.

Called the Center of Excellence 2, the facility in Pascagoula is outfitted with the latest high-tech equipment to build nuclear submarine propellers and other equipment for the military.

Also, despite Amazon delaying or canceling the launch of more than a dozen warehouses across the country, it still opened an Amazon Fulfillment Center in Madison County that will employ more than 1,000 people when fully staffed.

Albany Industries, an upholstered furniture manufacturer, plans to increase its presence in Mississippi by locating its manufacturing and shipping operations in Calhoun City. The project, also announced in April, will create 85 jobs.

In May, Milwaukee Tool held a groundbreaking in Grenada County to unveil its new manufacturing facility, which is expected to bring more than 800 jobs to the eight-county area in north central Mississippi.

On the housing front, the market continues to be fluid despite The Fed raising interest rates in response to inflation.

“Mortgage rates are up, and they went up a little quicker than we all thought they would,” Matt Wilson, President of the Mississippi Mortgage Bankers Association, said. “Rates were never supposed to stay as low as they did for as long as they did. And even the 5% to 6% interest rates are considered low-interest rates historically. There is still a positive outlook for next year with a high volume of houses being sold.”

Mississippi government, as well as trade, transportation and utilities continue to employ the most people in Mississippi with each sector showing more than 235,000 people with jobs.

However, it is the manufacturing wins that continue to get high praise with news.

“2022 has been a record setting year for our state. Mississippi is in the best fiscal and financial shape in its history,” Reeves said. “In 2022, we saw Mississippi’s unemployment rate drop to its lowest level ever. In 2021, Mississippi had the largest annual increase in employees since the last century. And from June 2021 to June 2022, we’ve increased employment by another 30,000 jobs.”