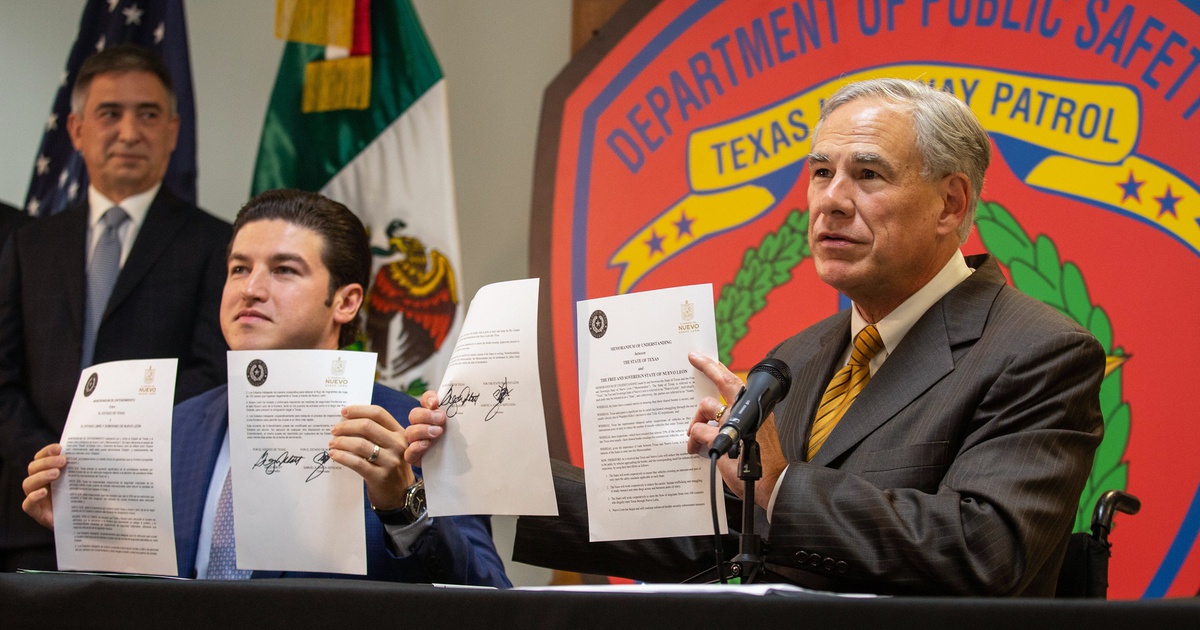 Gov. Greg Abbott and Nuevo León Gov. Samuel Alejandro García Sepúlveda announced an agreement Wednesday they say will help ease commercial traffic at the Laredo-Colombia bridge, one of at least four international ports of entry where international trade has been snarled since Abbott ordered Texas state troopers to do additional inspections on cargo.

As part of the deal, Texas Department of Public Safety troopers will stop inspecting every commercial truck on the Laredo–Colombia Solidarity International Bridge as long as Nuevo León has checkpoints on its side of the Mexican state’s 9-mile-long border. Texas’ controversial inspections — which have caused hourslong delays, spurred protests at ports of entry and fueled fears of food shortages — will continue for trucks coming from the other three Mexican states that border Texas.

“If Nuevo León can assure security, technology, security checkpoints and patrol the border to help Texas and Texas can help us with more merchandise, with more commerce, we will do it,” García Sepúlveda said.

He said his state has started inspecting commercial vehicles at different checkpoints in Nuevo León. García Sepúlveda didn’t go into detail about what the inspections consisted of on the Mexico side of the border but he said they involved federal, immigration and state police.

It’s not clear if Mexican authorities will inspect every commercial vehicle, as Abbott ordered state troopers to do, or whether checks on the other side of the border will also cause delays in commercial crossings.

Abbott and García Sepúlveda signed the agreement during a news conference in Laredo, where it has taken truckers three hours or longer to cross into Texas, which is significantly longer than the average wait time of 15 minutes on a Wednesday afternoon. The agreement says the two states will work cooperatively to ensure vehicles crossing the border meet safety standards in both states, to reduce human trafficking and drug smuggling by criminal groups and to stop immigrants from heading to the Texas-Mexico border.

Abbott previously said the goal of the new inspection program is to seize narcotics and stop undocumented migrants from crossing into Texas. But neither Abbott nor the Texas DPS could point to any drug seizures or encounters with undocumented migrants when asked Wednesday about the success of the initiative. Instead, they pointed to hundreds of vehicle safety violations.

A DPS spokesperson said the agency has inspected 4,133 commercial vehicles and 973 of those “were placed out of service for serious safety violations to include defective brakes, defective tires and defective lighting.”

The move to ease Texas’ inspections at one of the 13 commercial crossings along approximately 1,200 miles of border the state shares with Mexico came after Abbott has been heavily criticized by the White House, Mexican federal and state governments and the American private sector about the inspections. Even fellow Republican Sid Miller, Texas’ agriculture commissioner, called on Abbott to reverse course, citing supply chain issues that he predicted would leave grocery store shelves empty. U.S. Customs and Border Protection, or CBP, which already conducts commercial inspections, has called the state inspections “unnecessary.”

Abbott mandated the vehicle inspections on April 6 in response to the Centers for Disease Control and Prevention announcing plans to lift Title 42 — a pandemic-era rule that allows immigration officials to turn away recently arrived migrants at the U.S.-Mexico border, including those who are seeking asylum.

The deal with García Sepúlveda provides little relief for the overall trade logjam that has been playing out between the two countries since Abbott’s order went into effect. The Colombia bridge is just one of 13 commercial crossings between Texas and Mexico and the only one connected to Nuevo León. Over the last two years, around 20,000 commercial vehicles have crossed that bridge per month, according to statistics from the city of Laredo, but noncommercial vehicles also cross the Colombia bridge.

Abbott defended his actions during the Wednesday news conference, saying sometimes it takes drastic actions to get things done.

“We knew that as soon as we did what we did on the border that we would be contacted by officials in Mexico because it is a very high price to pay,” Abbott said. “Sometimes it just takes action like that to spur people sitting down and working things out like the way that they are beginning to work out.”

“The same people who have suffered a few hours of delay, they have been shouting for the past 15 months to the Biden administration, ‘Do not open those borders,’” Abbott said.

Title 42, implemented in March 2020, is meant to be used to prevent the spread of the coronavirus. But Republicans have said the rule is still needed to keep order at the border, which they say has been chaotic as a result of the Biden administration’s immigration policies.

Another border crossing in Laredo, the World Trade Bridge, is open only for commercial traffic and more than 165,000 trucks crossed that bridge each month over the last two years, according to that city. But the World Trade Bridge connects to the state of Tamaulipas, not Nuevo León, so it is unaffected by today’s agreement

Abbott said he hopes he can reach similar agreements with the rest of the Mexican border governors. García Sepúlveda said Nuevo León can serve as an example to the other Mexican border states.

Texas borders four Mexican states — Chihuahua, Coahuila, Nuevo León and Tamaulipas. On Tuesday, the governors of Tamaulipas and Coahuila sent a letter to Abbott telling him the inspections are “overzealous” and criticizing him saying, “political points have never been a good recipe to address common challenges or threats.”

María Eugenia Campos Galván, the governor of Chihuahua, said in a statement she is concerned over how the added inspections have affected both countries’ economies. She said she hopes all Mexican states that border Texas will join her in having a dialogue with Abbott to find another solution.

“I am a faithful believer in dialogue and mediation; and I am sure that it is possible to promote better actions to strengthen the security of both sides of the border, without affecting the economy of Mexican and American families,” she said.

No commercial vehicles crossed the Pharr-Reynosa International Bridge, typically the busiest commercial crossing in the Rio Grande Valley, since truckers on the Mexico side began blocking north- and southbound lanes Monday in protest of the new inspections. That quickly led to widespread delays for cross-border trade after Abbott announced the program last week.

Mexican truckers in Reynosa, south of McAllen, and Ciudad Juárez, south of El Paso, earlier this week created blockades preventing cargo from coming into the United States as a protest against Abbott’s added inspections. Some truckers reported having to sleep overnight in their 18-wheelers because the state inspections were holding up lines, they said.

CBP officials said that blockades in Juárez and Reynosa have concluded and commercial traffic has resumed as of Wednesday evening. The blockade in Reynosa ended on Wednesday after cartel operatives set cargo trucks ablaze in an effort to end the logjam, according to The Monitor newspaper in McAllen.

Also in response to next month’s lifting of Title 42, Abbott announced last week Texas will provide free transportation to migrants released and processed by immigration officials at the border to Washington, D.C. The first group arrived on Wednesday.

Over the past year, state officials have deployed thousands of Texas National Guard troops and dedicated billions of dollars to stem an increase in migrants crossing the Texas-Mexico border. But that mission, dubbed Operation Lone Star, has been mired in controversy as National Guard troops have called it a disaster. Several service members tied to the mission have also died by suicide, leading to calls for an investigation from congressional Democrats.

Abbott and DPS have repeatedly boasted in news conferences, on social media and during interviews on Fox News that the mission has disrupted drug and human smuggling networks. Officials touted more than 11,000 criminal arrests, drug seizures that amount to millions of “lethal doses” and the referrals of tens of thousands of unauthorized immigrants to the federal government for deportation.

But the state’s claim of success has been based on shifting metrics that included crimes with no connection to the border, work conducted prior to the operation, plus arrest and drug seizure efforts that do not clearly distinguish DPS’s role from that of other agencies, according to an investigation by ProPublica, The Texas Tribune and The Marshall Project.

The largest share of Operation Lone Star arrests were of people accused only of trespassing on private property. Many spend months in prison, but the strategy does not appear to have slowed immigration.

How Russia’s propaganda machine is reshaping the African narrative