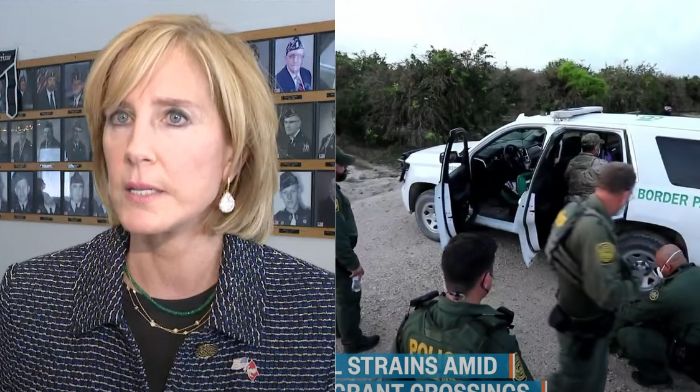 The U.S. has already set a record for the number of illegal immigrants coming into the country this fiscal year – and while Democrats have done nothing about the border, they did find time to spend $40 billion on 87,000 new IRS agents.

She introduced The Diverting IRS Resources to the Exigent Crisis Through (DIRECT) Funds for Border Security Act.

The bill would take the $45.6 billion set aside for the IRS in the recently passed “Inflation Reduction Act” and instead use the money for border security and Border Patrol agents.

Migrant smuggling at the Southern Border is a $20 billion industry for the cartels, which are raking in record profits.

We must secure the border & Congress should start by passing my DIRECT Funds for Border Security Act.

Tenney contends that additional IRS agents means additional audits that would primarily target low and middle income families, although President Joe Biden and the Democrats have denied that will be the case.

A statement from Rep. Tenney about her new legislation reads:

“The Biden administration’s failure to secure the border and enforce our immigration laws has created an unmitigated disaster at our Southern Border that is impacting communities across the country. Meanwhile, President Biden and Democrats in Congress are ignoring the problem and instead giving tens of billions of dollars to the IRS, not to improve its services but so they can audit an additional 700,000 working-class Americans.

“Joe Biden’s priorities could not be more twisted. Americans don’t want more IRS audits; they want a secure border and safer streets. The DIRECT Funds for Border Security Act will deliver just that by providing CBP with the money needed to hire new agents.”

Soaking Taxpayers vs Protecting the Border

As the statement from Rep. Tenney’s office states, an inflated army of IRS agents is needed by the Biden administration to squeeze a few more dollars out of American taxpayers in order to “pay” for the Inflation Reduction Act.

A piece of legislation that, in name at least, is designed to decrease costs, but by many accounts will do anything but.

Of course, the government doesn’t need more revenue – which is already at record levels.

What the country does need, however, is border enforcement. Besides the record-breaking number of illegal immigrants crossing the border, approximately 78 individuals who are on the terror watch list have been arrested just this year.

Biden has just issued a new regulation to issue MILLIONS of work permits to illegal border-crossers. (Repealing Trump reg prohibiting it). The eradication of our sovereignty is planned and purposeful. And the CR is the last chance to make this unmistakably clear before November.

Action In The Senate

While Rep. Tenney is introducing her bill in the House to put funding where it should be, not in the hands of the IRS, but on the southern border, earlier this week, Sen. Josh Hawley (R-MO) introduced the “Empowering States to Deport Illegal Immigrants Act.”

The bill would give individual states the power to enforce some federal immigration laws, including deportation.

Also included, state prosecutors could bring illegals up on charges of immigration violations, and would also give border states more freedom to use their own resources to close their portions of the border.

0 days at the southern border.

153 Years Ago, the 15th Amendment Was Ratified Granting Black Males Right to Vote