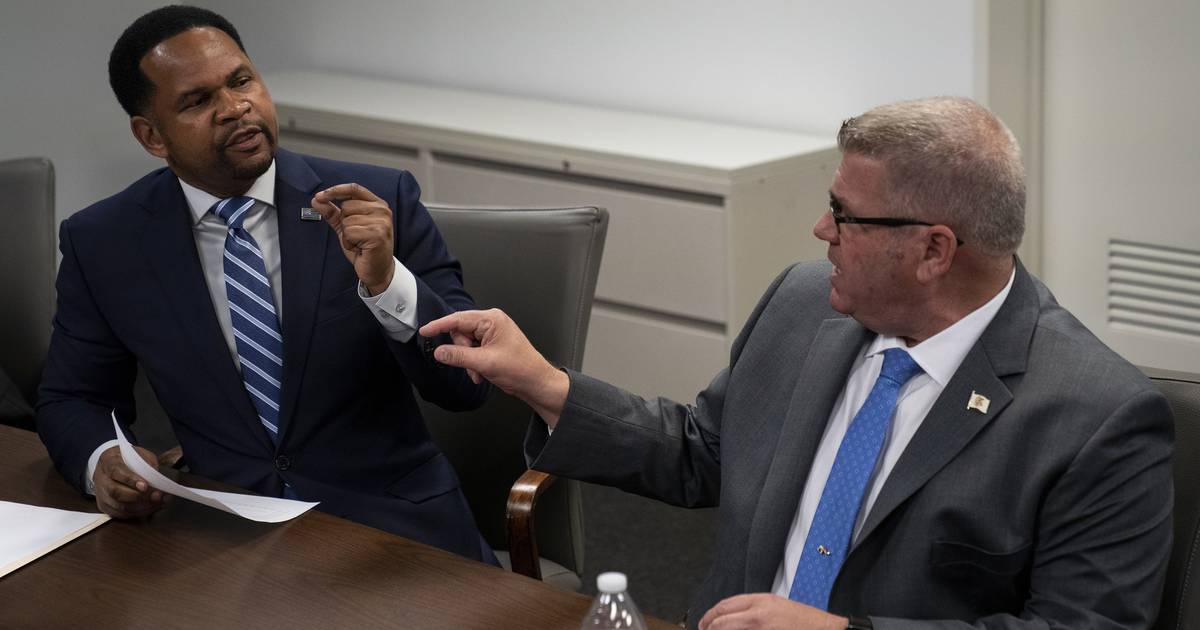 In the first meeting of the six men seeking Illinois’ Republican nomination for governor, Aurora Mayor Richard Irvin found himself under fire from his rivals Tuesday for using his well-funded campaign to run millions of dollars worth of TV ads and mailers to attack them while avoiding facing them or much of the public.

Candidates Jesse Sullivan and Darren Bailey have taken the most hits from Irvin’s campaign ads and the two took turns occasionally firing their own shots back at Irvin during a session of the Chicago Tribune’s Editorial Board six weeks before the June 28 primary.

“With Richard, you know, the way he’s running this scorched-earth campaign, just telling lies, treating the conservative base like they’re idiots,” said Sullivan, a cryptocurrency venture capitalist from Petersburg.

Sullivan also attempted to tie Irvin to former one-term Republican Gov. Bruce Rauner, who lost to Democratic Gov. J.B. Pritzker in 2018, and warned GOP voters that supporting Irvin this primary would result in the same outcome.

Noting many of Rauner’s aides are running Irvin’s campaign, Sullivan said, “It’s the same Rauner playbook that they used in 2018. The same insiders that ruined his chances against Pritzker. Same thing is going to happen here with this one. The conservative base is not going to show up for him.”

For his part, Bailey, a state senator from Xenia, contended the city of Aurora, where Irvin has been mayor since 2017, is “the highest taxed city in the nation,” has a “ridiculous pension problem” and has downgraded crimes to civil violations to “doctor the papers” to make the city look safer.

But Irvin denied he was avoiding the media or his GOP opponents despite his lack of news conferences, public events or joint appearances with the other candidates.

“My opponents are trying to create that perception,” Irvin said, accusing his rivals of wanting to talk about “non-important, impertinent things” while “the reality is we’ve got to talk about the things that are important to the voters and that’s what I want to talk about.”

Irvin also tried to smear Sullivan and Bailey by suggesting both have supported well-known Democratic candidates for president — a theme that has come to the fore during this GOP primary as a way to smear opponents.

Despite running for more than 100 minutes, the candidates provided few new insights on their policy positions as they sought to distinguish themselves from each other. They all hold similar ideologies on major issues, including opposing abortion, increasing funding and support for law enforcement and addressing Illinois’ public employee pension debt and its $140 billion unfunded liability.

Though Illinois overwhelmingly supported Joe Biden over Donald Trump in the 2020 presidential election, the former Republican president remains a powerful force in GOP politics nationally and locally, with Bailey actively courting his endorsement and saying there was “no” daylight between him and Trump.

During the editorial board session, Bailey sought to question Irvin’s support for the former president.

Except for Irvin, the candidates — including paving magnate Gary Rabine, former state Sen. Paul Schimpf of Waterloo and attorney Max Solomon of Hazel Crest — explicitly said they voted for Trump in 2020. Irvin, repeating a line he has used in recent days after WTTW Ch.-11 reported on texts in which he called Trump an “idiot” and a “bigoted racist,” said only: “I’m a Republican and in generals (elections), I vote Republican.”

Irvin has sought to avoid any discussion of Trump in his limited public appearances, not commenting on the former president’s claim the election was stolen or on Trump’s role in the Jan. 6 insurrection. Instead, he contends such questions are a distraction being pushed by Pritzker.

On Tuesday, Irvin said, “there have been areas where I’ve disagreed” with Trump. But he added, “The Trump administration has done many things for the American people that were great,” citing tax cuts, public-private opportunity zones in economically depressed areas and his support for law enforcement.

But he also added that by discussing Trump, his rivals “are falling into the trap” and not talking about solutions.

Schimpf, a former military lawyer, acknowledged voting for Trump in 2016 and 2020 and said how a candidate voted for president was a legitimate topic for voters to know.

But he also said that for Republicans to be successful, it would require a candidate who can win crossover votes in a state with more Democrats than Republicans, who can unify an often disparate state GOP and who can “be able to survive a $100 million character assassination that is going to be coming from J.B. Pritzker.” He maintained he was that candidate.

Irvin is backed by $45 million in contributions from billionaire Ken Griffin, Illinois’ wealthiest man and the founder and CEO of the Citadel hedge fund. Griffin has been engaged in a long-running political feud against Pritzker, a billionaire entrepreneur and heir to the Hyatt Hotel fortunes.

While Irvin has used Griffin’s money to pepper the airwaves and stuff mailboxes to attack Pritzker and his rivals, the Democratic Governors Association and a political action committee aligned with Bailey have been spending millions on TV ads attacking the Aurora mayor’s tenure as a defense attorney and for previous positions Irvin has taken.

Irvin’s past positions — praising the election of Obama as the nation’s first Black president and Lori Lightfoot’s election as Chicago mayor and calling Pritzker a “good friend” — are the subject of one of three new ads being launched by Bailey, his first in the Chicago market, after counting on grassroots rural support.

Bailey has received nearly $6 million from another billionaire, conservative megadonor Richard Uihlein of Lake Forest, to put up the ads. Uihlein also has given more than $4.8 million to the Bailey-aligned political action committee People Who Play By the Rules PAC.

Following the editorial board meeting, Bailey said the decision to hold off on television advertising in the pricey Chicago market until six weeks out from the election was to conserve resources while letting “the opposition fill the airwaves with their lies.”

“We believe it saves us money because there’s been so much nonsense that has been propagated, the people are — they’re reading right into it,” Bailey said.

But during the session, Sullivan said he thought Chicago-area Republicans would reject Bailey’s message because the state senator previously co-sponsored a resolution that called for the Chicago area to become a separate state. Bailey said he proposed the resolution because city values did not represent those in Downstate Illinois.

But Bailey said in the past two years, “my wife Cindy and I and our team, we’ve been immersing ourselves in Chicago culture trying to unite the city and the state.”

Rabine, of Bull Valley, cited the area work of his paving business, saying, “We pave more parking lots in this market than anybody else, so my name is in front of many people over the last 40 years. I’m confident that I’m the one that can win the Chicago market.”

Rabine, who said he plans to spend $5 million to $7 million overall on the campaign, including TV ads on Chicago’s airwaves, said he’s motivated to run to improve Illinois’ economy so citizens don’t leave the state.

Noting his wife Cheryl died of brain cancer in 2020, Rabine said, “She’s buried in my community. I want to be buried with her. My plot is next to hers. And I don’t want them to be shipping my body in from Florida or Tennessee or wherever. This is my home.”