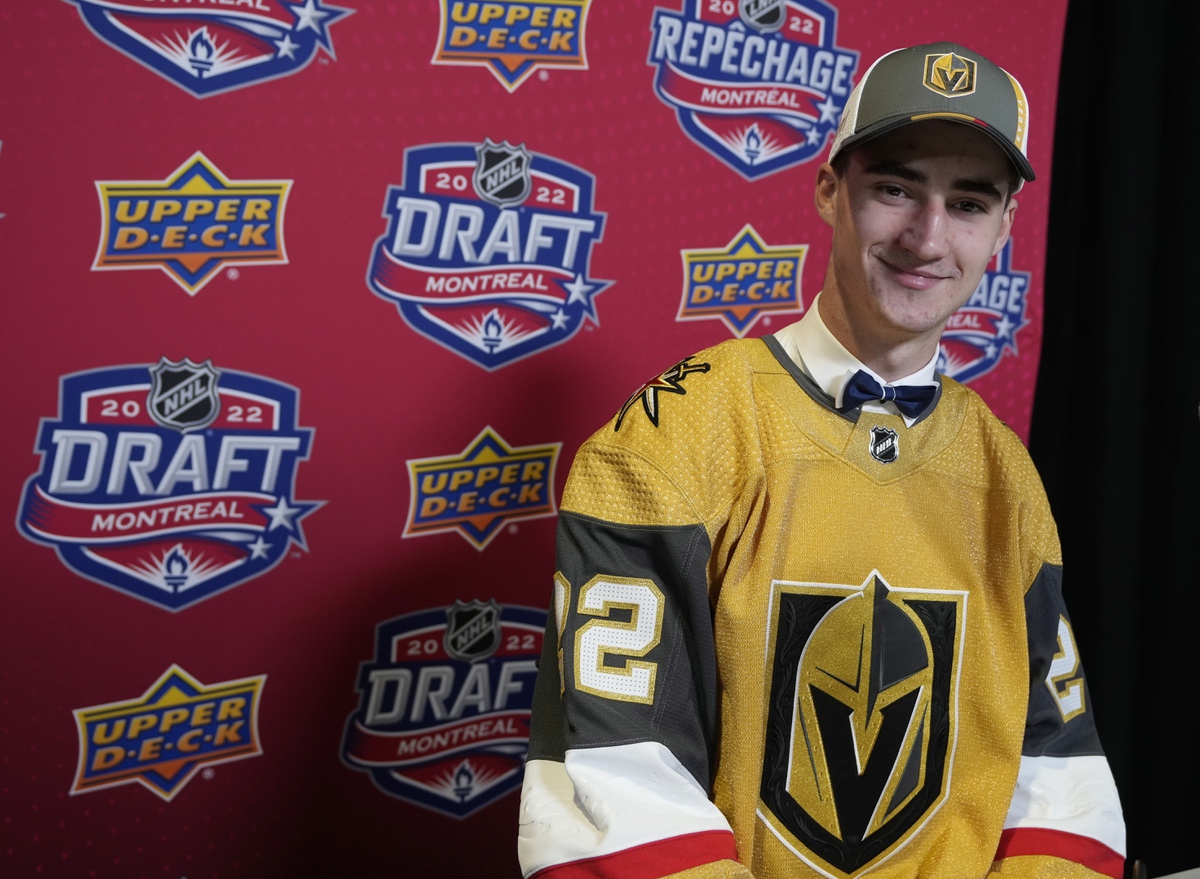 Las Vegas Knights hockey team 48th pick Matyas Sapovaliv, speaks to the media during the second round of the 2022 NHL Draft Friday, July 8, 2022 in Montreal.

Getting back to the in-person draft format was an adjustment for the Golden Knights.

They, much like the other 31 teams, had become used to drafting virtually, having their own war rooms and talking freely without the fear of other teams eavesdropping.

But the feeling of the prospects being at the draft, putting on their team’s sweater and walking along the draft stage, was another sign of hopeful return to normalcy for the NHL.

“It reminds you of why we do it,” said Bob Lowes, Vegas’ assistant director of player personnel. “It’s such a fan-friendly event, and it’s something unique to our league.”

Two of Vegas’ six draft picks Friday during the second day of the NHL Draft got to experience that. Czech center Matyas Sapovaliv was the Golden Knights’ first pick of the day, going at No. 48 overall.

At No. 128 in the fourth round, Vegas sent a 2023 fourth-round pick to the host Montreal Canadiens to take goalie Cameron Whitehead.

Sapovaliv was someone the Golden Knights had high on their draft board, with Lowes adding there was internal discussion of trading up to select him earlier. Vegas stayed patient and got a center they consider to be a workhorse.

The 6-foot-3 skater played close to 22 minutes a night for Saginaw of the Ontario Hockey League. As a primary participant in both the power play and penalty kill, Sapovaliv had 52 points in 68 games this season.

Lowes said when the team met with Sapovaliv at the NHL Draft Combine in Buffalo, he said the center started to run out of gas with the time he was on the ice.

“We think he’s going to pop offensively,” Lowes said. “There’s lots of runway there, and we feel in two years, he’s going to be big, strong, a really good two-way forward.”

Sapovaliv, who will be in Las Vegas for the first time ever for development camp starting Monday, said he likes to look at Colorado Avalanche forward Mikko Rantanen as someone he molds his game after. He said his hockey sense is the strongest part of his game.

“I’m looking forward to keep on working,” he said.

Whitehead was one of the top goalies on the Golden Knights’ board. The 6-foot-3 netminder is a 2023 commit to Northeastern University; he went 16-8-4 this season with Lincoln of the USHL and was ranked seventh among North American goalies in the NHL’s Central Scouting list.

“I was barely able to sleep,” said Whitehead about the last two days. “You’re stressed because you never know what’s going to happen. I was just looking forward to the whole experience.”

The Golden Knights feel they got great value with their later picks. Jordan Gustafson, taken from Seattle of the Western Hockey League at No. 79 in the third round, had 52 points in 58 games this past season.

Much like Sapovaliv, Lowes was high on Gustafson’s two-way game. His versatility playing all three forward positions was also a factor.

“We think there’s a chance he can grow a little bit,” Lowes said. “I think he’s got character, good two-way game. We like the versatility and the leadership he brings.”

Vegas also took an over-ager in Patrick Guay from Charlottetown of the Quebec Major Junior Hockey League. The 20-year-old finished his fourth year of juniors and had 55 goals and 104 points.

The 5-foot-9 goal scorer has a strong knack for attacking the net, Lowes said, and can score from distance as efficiently. Lowes compared him to veteran goal scorer Mike Hoffman, someone Lowes evaluated when the Ottawa Senators drafted him with the 130th pick in 2009.

It’ll be a sense of familiarity for Guay when he gets to Las Vegas for development camp. He was a teammate of prior Vegas draft picks Lukas Cormier and Jakub Brabenec.

“The smaller players, what you need from them is compete,” Lowes said of Guay. “He has a big heart and works very hard.”

Each selection is expected to be at City National Arena for development camp on Monday.