Golden Knights’ playoff push coming down to the wire 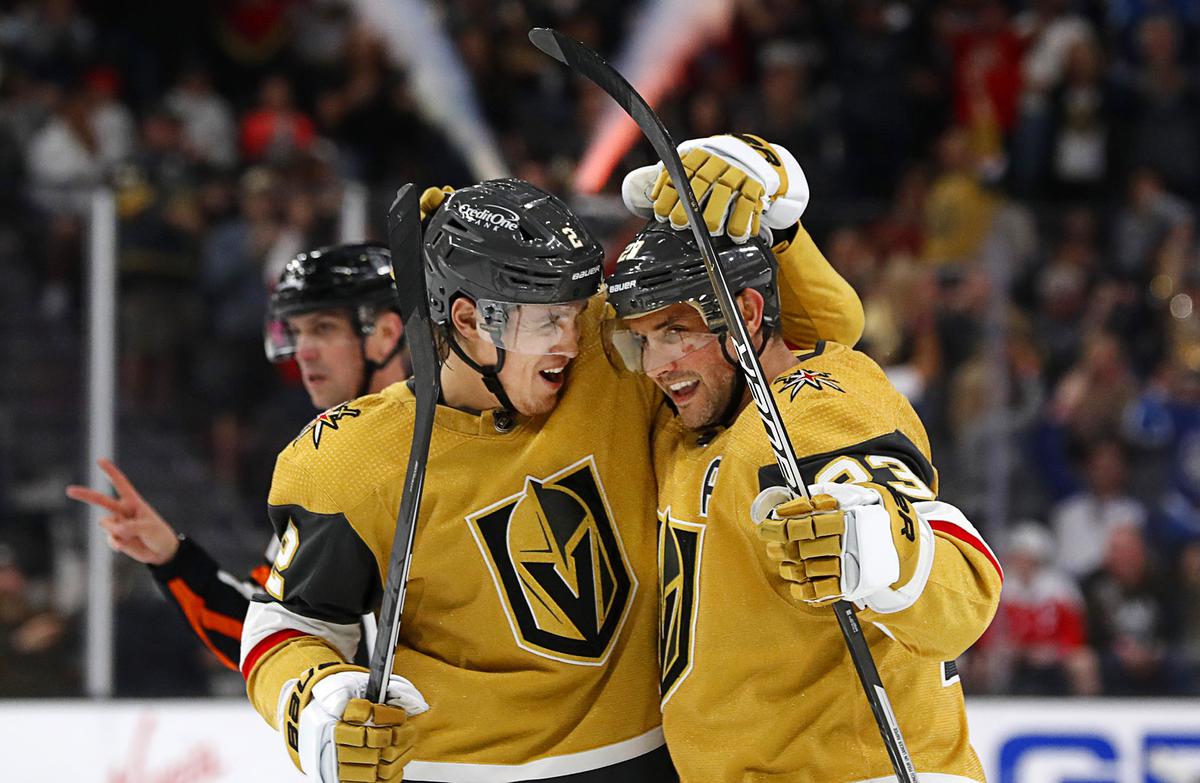 One by one, they’ve almost all returned over the last month.

A small army of Vegas Golden Knights’ key players that missed large parts of the second half of the year—forward Mark Stone, forward Max Pacioretty, goalie Robin Lehner, defenseman Alec Martinez and defenseman Brayden McNabb—are all back on the ice in time for the final week of the regular season. And most of them have something in common—they’re still not up to 100% health- and conditioning-wise.

“I know we’re a better team with the guys we’re putting in the lineup even if they’re not up to game speed yet,” coach Pete DeBoer said before an April 14 6-1 win in Calgary. “It’s on us to get there as quickly as possible because we’re down to the stretch here.”

The Golden Knights are fighting against time and their bodies to lock up a playoff berth and salvage what’s been the toughest season in team history. They’re pushing with everything they can muster to reach the postseason for the fifth time in five years like the future of the franchise depends on it.

That’s exactly what Vegas should be doing considering it came into the year with Stanley Cup aspirations and has a roster that, when healthy, looks more than capable of getting to such heights. But does the team’s long-term outlook really hang in the balance? Absolutely not.

Regardless of the results of the regular season’s final four games, no championship window is slamming shut on the Golden Knights. It would be disconcerting, if not shocking, to see a team as talented as Vegas finish in the bottom-half of the NHL’s standings but more a reflection of a nightmare campaign than any underlying flaw.

Nightmare campaigns happen in hockey, even to teams set up for sustained success like the Golden Knights. Just look at the last three Stanley Cup champions.

Before they won back-to-back titles the last two years, the Tampa Bay Lightning missed the playoffs in 2017 with the same personnel core. The 2019 St. Louis Blues similarly broke through only after having failed to make the playoffs the year before.

In both instances, the previous disappointments gave the franchises a chance to take a step back and reassess their situations. They made slight tweaks that eventually led to them capturing all their wildest dreams.

Perhaps the Golden Knights could benefit from the same sort of reckoning. They were going to be forced to have an active offseason shedding salary anyway after assembling the league’s highest payroll in the wake of the midseason trade for center Jack Eichel.

The Golden Knights’ salary-cap squeeze has suffocated them all season and left them unable to have all their best players active at the same time even if they were all available. The salary cap dissipates in the postseason so that would no longer be a problem if they make it, but it’s hard to imagine them ever getting fully healthy this year given what they’ve been through.

Five teams have lost players for more total games than the Golden Knights according to injury tracking and data site Man Games Lost, but Vegas ranks first in terms of the most impactful players lost to injury. And maybe that shouldn’t be such a surprise considering the last two seasons.

Back-to-back trips to the conference finals means the Golden Knights have played more games than any team in the NHL since 2020 aside from the Lightning. Extra ice time takes its toll and can’t be dismissed as a contributing factor to why so many franchise cornerstones have gotten banged up this season.

It’s worth risking more strain for a shot at the Stanley Cup because that’s why everyone plays in the first place, but there could also be long-term benefits if it doesn’t work out this year. The Golden Knights would have a full offseason for the first time in franchise history, allowing for a chance to rest, recover and refocus for a potential championship run in 2023.

When owner Bill Foley started the process of bringing an expansion NHL franchise to Las Vegas nearly a decade ago, he spoke of a goal to win a Stanley Cup within eight years. He went on to trim that into a famed “cup in six” wish.

It seemed borderline preposterous at the time but both timelines became immediately realistic and remain that way, no matter how this season winds up. One mandate Foley never voiced was a desire to reach the playoffs every season.

Such consistency would be nice, but not a requirement for a championship-caliber franchise, and arguably not even practical with how much parity the NHL is designed to foster and how much luck plays into a single season. Sometimes it takes one step back to make two steps forward. That should give Vegas hope going forward even if it falls short of the playoffs this year.