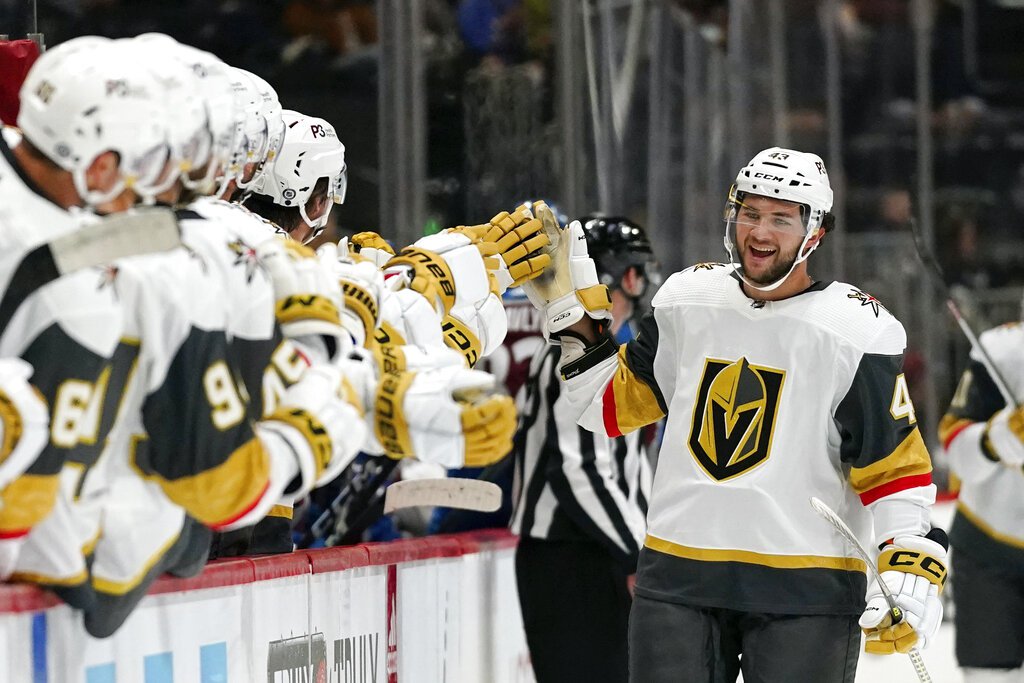 Vegas Golden Knights’ Paul Cotter celebrates a goal in the first period of an NHL preseason hockey game against the Colorado Avalanche, Sunday, Sept. 25, 2022, in Denver.

The Golden Knights, using a lineup of mostly rookies and prospects, committed nine penalties tonight in a 3-1 loss to the Colorado Avalanche to open preseason play.

Rookie forward Paul Cotter scored the lone goal for the Golden Knights in the first period, but the host Avalanche scored twice on the power play in the third period to take advantage of the Vegas penalties.

Here are some observations from the game:

Cotter had two scoring chances in the first 12 minutes, and both times saw the 6-foot-1 Cotter use his size and speed to win battles to the net.

But it was on the power play where the rookie forward made his mark, ripping a one-timer off a give-and-go with Nic Roy to put the Golden Knights on the board first.

Cotter — like fellow young forwards Jake Leschyshyn and Jonas Rondbjerg are no longer waiver exempt — meaning they could be claimed by other teams if they don’t make the roster out of training camp. And Cotter is believed to be on the roster bubble, meaning a strong performance tonight could enhance his chances to make the team.

Vegas’ forward group might already be set, but it’s performances like that which will make decisions tough for general manager Kelly McCrimmon and coach Bruce Cassidy.

When Michael Hutchinson signed with the Golden Knights in July, the initial expectation was he would compete for the No. 2 goalie job pending the health of Robin Lehner and Laurent Brossoit.

The acquisition of Adin Hill has made that path difficult for the 32-year-old, but the longtime AHL goalie showed he could be relied on if the minor league Henderson Silver Knights need a veteran presence.

Hutchinson finished with 13 saves and made a number of key stops on the penalty kill. The Golden Knights’ shorthanded unit killed all four penalties that Hutchinson was on the ice for.

Jiri Patera played the second half of the game and finished with 14 saves on 16 shots.

This is an important year for the development of the goalies in the Vegas pipeline, namely Patera and Isaiah Saville. If they struggle, Hutchinson could prove to be a reliable stopgap and a useful depth option.

Zach Whitecloud was one of the best players on the ice. That’s not a surprise. What was a mild shock was how good Whitecloud looked in the offensive zone.

The 25-year-old defenseman has been a steady presence as a third-pairing option and has always been reliable on the defensive end.

If Cassidy’s system opens the ice for fellow defensemen Shea Theodore and Alex Pietrangelo to contribute to the attack, it may also unlock a new element of Whitecloud’s game.

Whitecloud showed last year he could add another layer to his offensive game with a career-high 19 points in 59 games. Even in a preseason game, the confidence continues to exude from Whitecloud, who appeared to be quick in making decision with the puck.