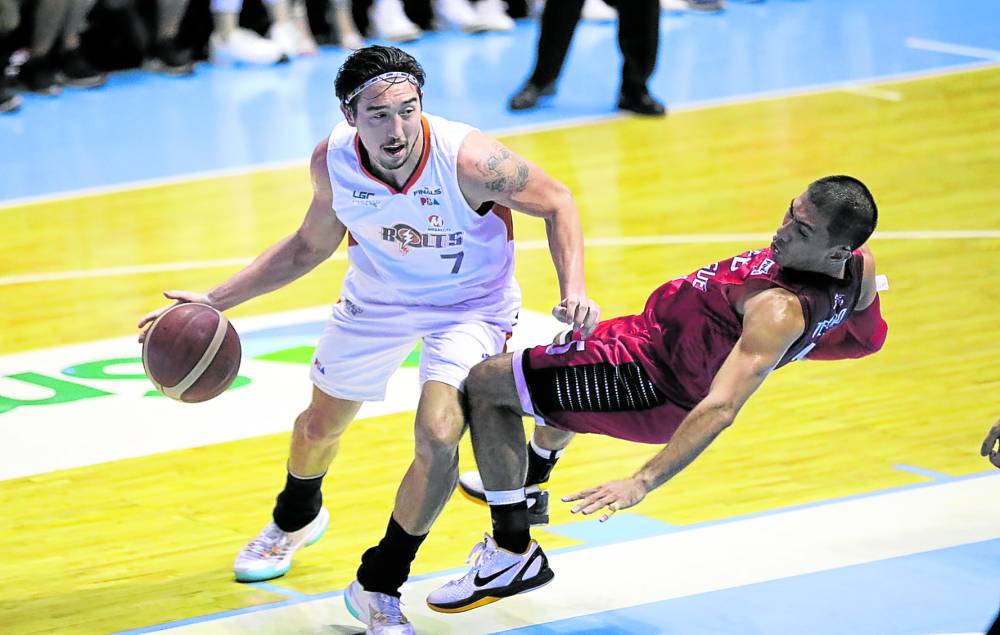 Regaining much needed zest from the Holy Week break, Barangay Ginebra on Easter Sunday battled for 48 hard minutes to hold off Meralco, 115-110, in Game 5 of the PBA Governors’ Cup Finals as the Gin Kings can again start preparing the banners and chilling the bubbly for another grand party.

Starting out hard and finishing with full composure and poise, the Kings took everything that the Bolts could offer, breaking away inside the final five minutes to take a 3-2 lead with their second win in the best-of-seven series before a delirious, appreciative throng of their faithful at Smart Araneta Coliseum in Cubao.

Scottie Thompson again stepped up big-time and for the second consecutive game, emphasized that there is no better local player in the tournament after missing a triple-double by just a rebound with his 19 points and 11 assists.

“We talked about it during the timeout. Keeping our poise, and slowing it down a little bit,” said Ginebra coach Tim Cone. “[The players] really know how to settle down, and they can think the game through. So I’m just really fortunate that I have a veteran team that’s been doing this stuff for a while. They handled it extremely well.”

Ginebra has, in effect, a two-for-one chance of nailing the season-ending conference again starting with Game 6 on Wednesday, which bodes well for the Kings considering the amount of time they can rest their nucleus like in the days leading to the fifth game.

Justin Brownlee, the Best Import of the conference, finished with a game-high 40 points spiked with 11 rebounds as he helped the Kings keep the Bolts at bay for most of the night.

Meralco crept within 98-97 with under five minutes remaining, before Thompson scored or assisted on seven of the Gin Kings’ last 15 points.

“Our guys made big shots, made big plays,” said Cone. “We scored 115 points against a really, really good Meralco defense, you know, that really tells you something about how well we shot the ball tonight.”

This situation is not new to either team, with the Bolts also having a similar 2-1 lead in the 2016 version of the tournament only for the Kings to come roaring back and win the next three games.

Import Tony Bishop Jr. had 30 points and 15 rebounds for the Bolts, who need two straight wins to complete a PBA breakthrough and avoid being a footnote of this historic stretch of Ginebra championships for the fourth time in the last five seasons.

Aaron Black tossed in 25 points and Chris Newsome 27 for the Bolts, who would need to backstop their top three players in the next game to have a chance. INQ