GIC returns a record 37.5%, reaching S$1 trillion in assets: Here are some of its recent investments 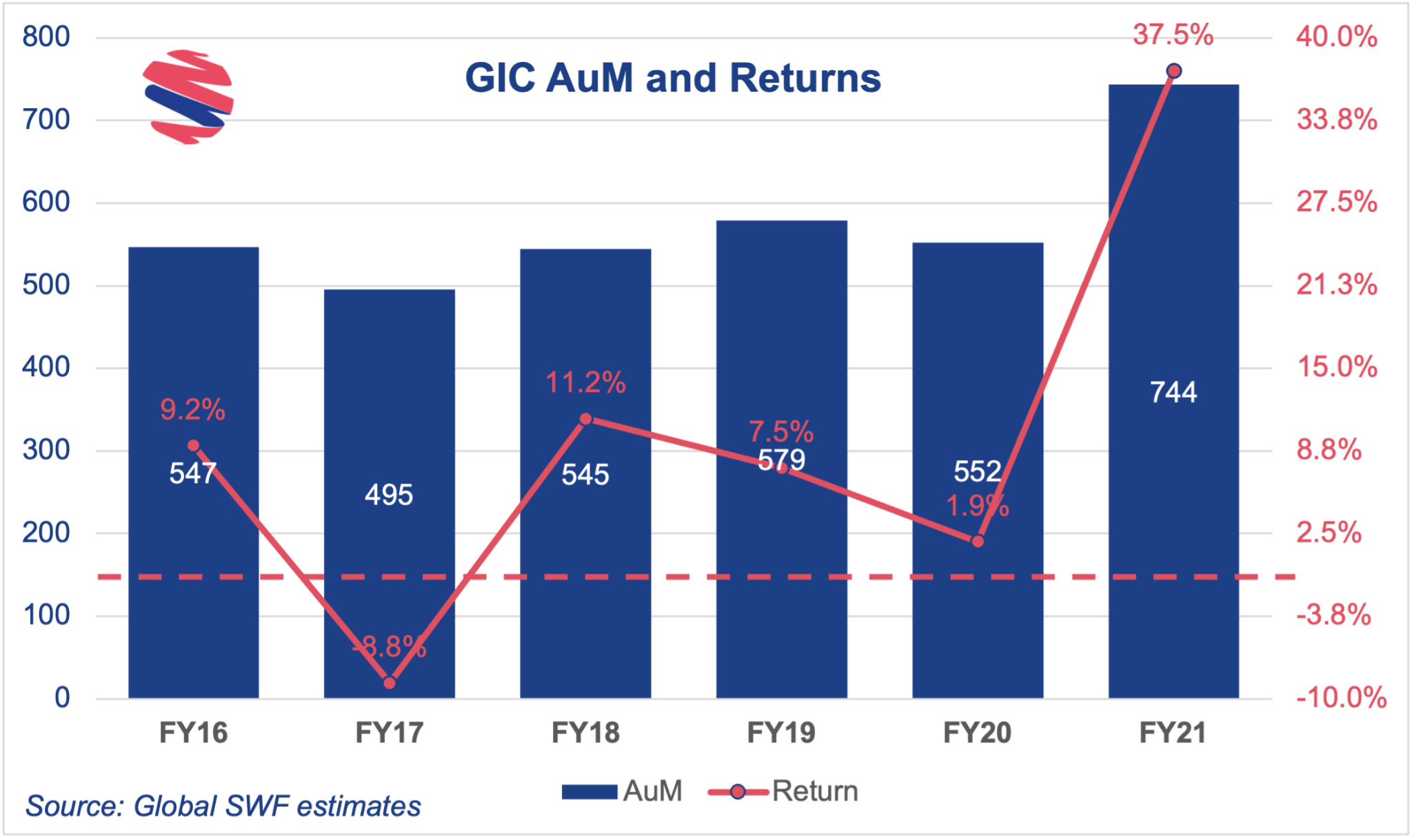 (Disclaimer: All opinions expressed in this article belong solely to the writer)

Last month I covered Temasek, now it’s time to take a closer look at its larger sibling. Singapore’s sovereign wealth fund GIC released its annual report in July but, as ever, the figures are not complete, as some remain withheld.

Officially, GIC reports neither the total Assets Under Management nor the one-year return rates (what is understandable, of course, considering its long-term investment horizon). Nevertheless, independent analysts provide estimates of both performance and the value of its portfolio.

Global SWF, a 3-year old platform tracking sovereign wealth and pension funds founded by an ex-PWC Global Director and COO of SWF practice at PwC, calculated that GICs results have reached a record 37.5 per cent over the past year ending March 31st, outcompeting even the typically more aggressive Temasek which returned 24.5 per cent.

Their estimates also put the total figure of AUM at US$744 billion – or just over S$1 trillion, for the first time in GIC’s history.

Notably, this comes after a few years of stability in the fund’s performance, as exhibited in this chart below (figures are in US dollars). It turns out that the pandemic was rather good for business.

Singapore keeps getting richer thanks to COVID-19

As I explored a few weeks ago, worldwide Covid-19 crisis has actually made the prudent city-state wealthier by a few hundred billion dollars, due to stock market rallies around the world (a result of fiscal and monetary stimulus unleashed to battle the economic crisis induced by the virus) coupled with a surge in demand for the Singapore dollar.

Turns out that my earlier estimates of over S$200 billion that Singapore likely has gained in the past year have been rather cautious. If the above figures are accurate, the correct number is easily over S$400 billion, given the S$260 billion surge in the value of GIC’s holdings, on top of the S$181 billion gained through a combination of growing foreign reserves and Temasek’s portfolio – even after subtracting government’s Covid-19 support packages, which are going to amount to ca. S$54 billion by the end of this year.

Given these eye-popping amounts you may now be thinking – “Great! What can we spend it all on?” But the answer is, sadly – “not much”. Here’s why:

Singapore’s foreign reserves protect the currency exchange rates and are not meant to be liberally drawn from. Occasionally some amounts are moved to GIC for more profitable investment but, all in all, billions of dollars at MAS are held in liquid assets to ensure that SGD is neither very strong nor very weak.

Billions in Temasek are invested in equities – some of which may be quite liquid but are typically long-term investments. A quarter of its portfolio is tied up in Singapore and in critical companies like Singapore Airlines. Also, about 45 per cent is in unlisted assets which would be tough to liquidate.

Finally, there’s GIC, which is indirectly managing the central provident fund (CPF) money, as the proceeds from sales of special bonds protecting your CPF savings are transferred to it for investment.

Current CPF balances stand at S$485 billion – nearly half of GICs total assets. The remaining S$500+ billion out of the trillion dollar pile would technically constitute a part of national reserves but the company has to maintain a healthy buffer, assuming future economic crises may erode the value of its portfolio (while millions of Singaporeans remain legally entitled to steady returns on their CPF).

Its primary role is not to invest aggressively but rather maintain a fairly low-risk profile, with an above average return over a multi-decade horizon.

Hypothetically, between Temasek and GIC there may be S$200-300 billion worth of reserves which could theoretically be unwound without much hassle, if the companies liquidated some of their positions (and the government got a mandate to draw down this exorbitant amount of money, of course). But even in this fantasy scenario there’s a problem – as these investments are held in foreign currencies, they would first have to be exchanged to Singapore dollar, massively influencing currency exchange rates (since the funds would be liquidating foreign assets).

As you can see, it’s not so easy to actually take and spend hundreds of billions – which is why the stable returns in the form of NIRC (Net Investment Returns Contribution) flowing to the budget each year (to the tune of around S$20 billion) are a much more reasonable way of utilizing Singapore’s growing cushion of reserve money, without disrupting anything else in the process (and ensuring that these returns gradually increase with time).

But there’s another way that Singaporeans may benefit from GIC – and it’s by learning from its prudent management. So, here’s a look at some of its investments made in the past year, as it has been the most active fund globally, with over US$17.7 (S$24) billion deployed in calendar 2020.

Where did Singapore’s premiere investment corporation place its bets during the pandemic? Here is a handful of the 65 deals it did in 2020.

Along with Temasek, GIC is one of the biggest investors in tech.

GIC was the biggest investor in the data center sector, providing nearly a third of investment. Much of it was devoted to a US$ 1 billion joint venture with Equinix to develop and operate hyperscale data centers in Japan to support the workload deployment needs of a targeted group of hyperscale companies, including the world’s largest cloud service providers. The venture follows on from a similar deal signed in 2019 by the partners for hyperscale data centers in Europe, indicating a long-term partnership in the sector.

This deal has since been expanded, with another US$3.9 billion pledged by Equinix and GIC to expand to 32 datacenters globally.

In India it has done deals with and around Reliance Retail, a subsidiary of Reliance Industries – the most valuable Indian company led by India’s (and Asia’s) richest man, Mukesh Ambani. Together with TPG (formerly Texas Pacific Group) it pumped US$1 billion into the retail business in the autumn of 2020.

In a parallel investment, led by Canadian Brookfield and British Columbia’s pension fund, GIC acquired from Reliance its telecom tower operator, Tower Infra Trust, for a combined US$3.4 billion (with GIC taking a 55 per cent stake).

And, in collaboration with SAFE, it put US$670 million into India’s leading mortgage lender and largest privately owned bank HDFC.

On Chinese soil GIC remained one of the top investors in real estate, buying LG Twin Towers in Beijing (pictured above) and another 1.1 million sq ft. office building in the capital, together with a real estate manager AEW. With Yanlord, a Chinese real estate developer listed in Singapore, GIC has taken a 49 per cent stake in a S$1.46 billion joint-venture to develop integrated commercial/residential properties in China. It joined CITIC in its logistics property fund and in a strategic investment in Xugong Group Construction Machinery. And a stake in Ming Yuan Cloud Group gives it a share of the real estate software market too.

With Temasek it invested in an EdTech startup Yuanfudao, which was worth over US$15 billion last year – though this particular deal may turn sour after Beijing’s crackdown on tutoring companies (can’t win it all). But, perhaps, its stake in Aixuexi, which is specializing in STEM education and is leveraging cloud computing AI and internet of things, will yield better results.

This is in addition to its other bids in GigaDevice Semiconductor (flash memory chip manufacturer) and IPOs of Yihai Kerry Arawana (a food processing company) and bottled water manufacturer Nongfu Spring’s, US$1.1 billion launch in the stock market.

In the UAE, Singapore’s leading SWF participated in one of the largest infrastructural investments, acquiring – in a consortium with several international partners – a 49 per cent stake in Abu Dhabi National Oil Company’s gas pipeline assets, worth US$10 billion.

In Australia, with Hong Kong listed ESR Cayman, GIC acquired a S$4 billion property portfolio. In California it led a US$353 million funding round for Apeel Sciences, which is creating solutions for food waste and a US$500 million round by Affirm, a San Francisco fintech startup launched by PayPal co-founder Max Levchin (offering delayed ecommerce payments by instalments).

With an average of about five deals totalling S$2 billion per month, GIC was the most active state-owned investor (SIO) in the world in 2020.

While we certainly can’t judge the company by a single-year performance (which is why it doesn’t report it itself) its long-term consistency has made it one of the most successful SIOs in the world.

And, today, decades of prudent financial management have proved their worth during the worst pandemic in a century, growing Singapore’s financial cushion unlike at any other time in the past.