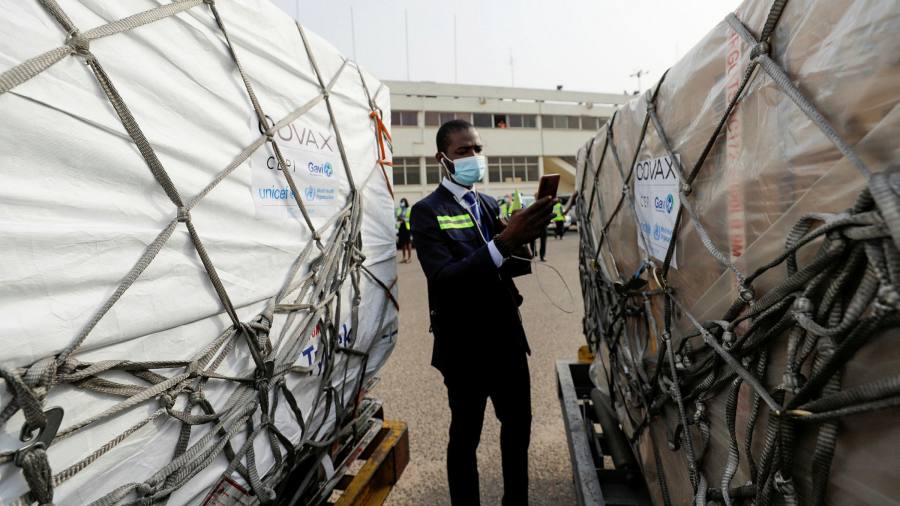 Ghana has become the first country in the world to receive coronavirus vaccines under the World Health Organization-backed Covax facility for low- and middle-income countries, marking the beginning of what has been called the largest vaccine procurement programme in history.

“With the first shipment of doses, we can make good on the promise of the Covax Facility to ensure people from less wealthy countries are not left behind in the race for life-saving vaccines,” Unicef executive director Henrietta Fore said in a statement.

Poor and lower-middle-income countries will not pay for doses secured through Covax. However, officials in several African nations have complained at the slow pace of the Covax rollout, pointing out that immunisation programmes began in countries such as the UK, United Arab Emirates and the US in December.

“We need shipments to 55 member states who are in Covax and that isn’t happening,” said Strive Masiyiwa, the African Union’s special envoy on vaccines. Covax had promised to deliver 15m vaccines to Africa this month and a further 40m in March, he said. “Today is almost the end of February. There’s nothing. Where are the vaccines? We haven’t seen them.”

Ghana will receive 600,000 doses of the Oxford/AstraZeneca jab from the Serum Institute of India. Other countries, including Nigeria, Kenya and Ivory Coast, are yet to receive any doses, although the latter is expected to get its first shipments on Friday, according to Gavi, the Vaccine Alliance.

South Africa, which grew impatient with Covax after a deadly second wave of the pandemic, ordered 1.5m doses of the Oxford/AstraZeneca vaccine from the Serum Institute of India. It later decided not to use them after a small study showed the vaccine was ineffective in preventing mild and moderate disease caused by the 501. V2 variant first discovered in South Africa.

Covax, which is backed by Gavi and the Coalition for Epidemic Preparedness Innovations, is designed to cover at least 20 per cent of citizens in participating countries by the end of the year, with a chance that it could raise that to 27 per cent if supplies and funding allow.

The African Union has also secured hundreds of millions of doses through the African Vaccine Acquisition Task Team, buying from AstraZeneca, Pfizer and Johnson & Johnson, as well as 300m doses of Russia’s Sputnik V jab.

Member states will pay for those vaccines through finance arranged by the Cairo-based African Export-Import Bank and the World Bank.

A few countries, including Guinea, Zimbabwe and Djibouti, have also arranged commercial deals or donations with Russia, China and other suppliers, though the amounts are small.

Ghana, in common with many countries in Africa, has had a milder experience of the pandemic, with just 580 official deaths and 80,700 confirmed cases for a population of 30m. However, the continent has experienced a second wave and there is concern that new variants may prove more transmissible and potentially more deadly.

Charles Adu Boahen, Ghana’s deputy finance minister, said Accra was first because the WHO had approved its rollout plan, which was led by former WHO deputy director-general Dr Anarfi Asamoa-Baah.

“[He] was in charge of vaccines for three years at the global health body and . . . was instrumental in putting together the rollout plan in a timely manner, allowing Ghana to be approved ahead of other African countries,” Boahen said.