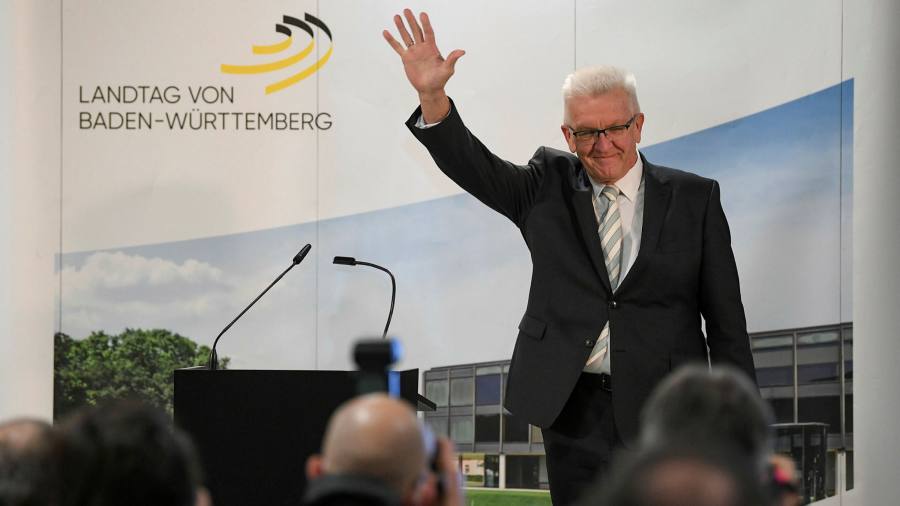 Angela Merkel’s Christian Democratic Union slumped to its worst ever results in two former strongholds as voters, angered by government missteps over coronavirus and a flurry of corruption allegations against CDU MPs, deserted the party in droves.

Projections by Germany’s Ard TV channel gave the CDU 24 per cent in the south-western state of Baden-Württemberg, far behind the Greens, and 27 per cent in the western region of Rhineland-Palatinate, where they lost to the left-of-centre Social Democrats.

The results could harm CDU leader Armin Laschet’s ambitions of running as the centre-right’s candidate for chancellor in September’s Bundestag elections. Many conservatives would prefer Markus Söder, leader of the CDU’s Bavarian sister party the CSU, to run instead.

“It’s a disastrous result for the CDU,” said Susanne Eisenmann, the party’s top candidate in the Baden-Württemberg election. “We now have to figure out why, for more than ten years, we’ve gradually been losing support in [this state].”

In recent weeks, polls have shown growing disenchantment with the Christian Democrats, and in particular with the performance of two CDU cabinet members — health minister Jens Spahn, blamed for the slow progress of Germany’s Covid-19 vaccination campaign and the botched rollout of rapid Covid tests, and economy minister Peter Altmaier, blamed for delays in the payment of financial aid to firms hit by the lockdown.

The results in the two western states don’t bode well for the CDU ahead of four other regional polls this year and the national elections in September, when Merkel will relinquish power after 16 years as chancellor of Europe’s most powerful economy.

But they were good news for the Greens. The party is projected to have won the elections in Baden-Württemberg, the only state in Germany that it runs, with 32 per cent of the vote, its highest regional score.

Sunday’s preliminary results suggest its “green-black” coalition, with the CDU as junior partner, has earned a mandate for a further five-year term.

But the Greens now also have the option of forming a “traffic-light” coalition with the SPD and pro-business Free Democrats — a combination that would be more congenial to many in the party than a renewed tie-up with the conservatives.

“This was a super start in a super election year,” said Robert Habeck, co-leader of the Greens.

The projections indicate that the SPD-led ‘traffic-light’ coalition in Rhineland-Palatinate can also continue in office for another five years. Many in the SPD now hope the three-way alliance could prove a model for a future national coalition government.

“We have shown in Rhineland-Palatinate that the traffic light has governed very well, and voters have emphasised that with this result,” said Malu Dreyer, the SPD governor of the state. “And why shouldn’t federal politicians take a look at that?”

The elections were overshadowed by a PPE scandal that has badly damaged the image of the CDU/CSU. Earlier this month CDU MP Nikolas Löbel resigned his parliamentary seat after it emerged that his company had earned a €250,000 commission on a deal to procure anti-coronavirus face masks.

Meanwhile the CSU MP Georg Nüsslein is being investigated for corruption after it was revealed that he, too, had earned a huge fee on a mask deal. He has announced he will retire from politics after the election.

The CDU has also been hurt by an investigation into alleged corrupt payments by the authoritarian regime of Ilham Aliyev in Azerbaijan to some of its MPs.

“The mask affair destroyed faith [in the CDU] and the people in Germany expect a better management of the coronavirus [pandemic],” said Christoph Ploss, the party’s leader in Hamburg. “The regional governments must finally provide sufficient test capacities and speed up the pace of vaccinations.”

The CDU was up against two extremely popular prime ministers who appeal to voters across the political spectrum — the Green leader of Baden-Württemberg, Winfried Kretschmann, and the SPD’s Dreyer in Rhineland-Palatinate.

In both states the CDU’s campaigns were led by nondescript candidates who were forced by the pandemic to eschew big campaign events and failed to reach many voters.

The result cements the Greens’ dominant position in Baden-Württemberg, which Kretschmann has now ruled for 10 years. The party rose to power in the state, home to Daimler, Bosch and Porsche, after the Fukushima disaster in Japan prompted a backlash against nuclear power in Germany.

Kretschmann was able to assuage voters’ doubts about the Greens, proving that, as he put it, economy could be reconciled with ecology. He sought a strategic dialogue with the auto industry in the state and pushed Baden-Württemberg as a hub for innovation.

But Sunday’s election is deeply humiliating for the CDU, which, prior to Kretschmann’s 2011 victory, had ruled the state for 58 years. The party often gained an absolute majority in the state, earning a record 56.7 per cent in 1976. Rhineland-Palatinate, long ruled by Helmut Kohl, later chancellor, was also long a CDU stronghold.