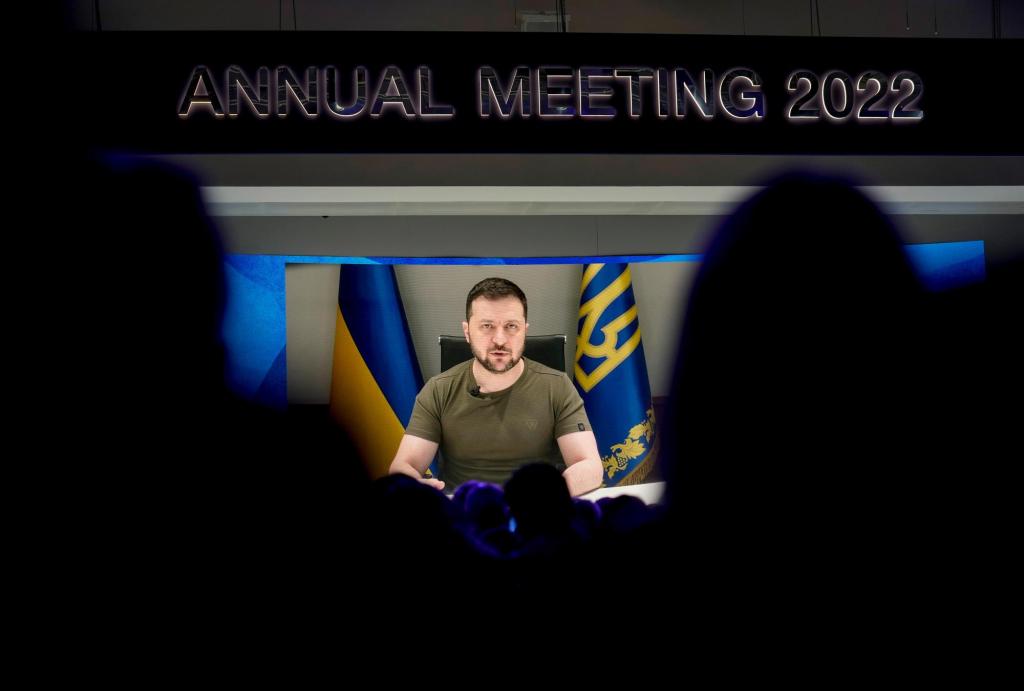 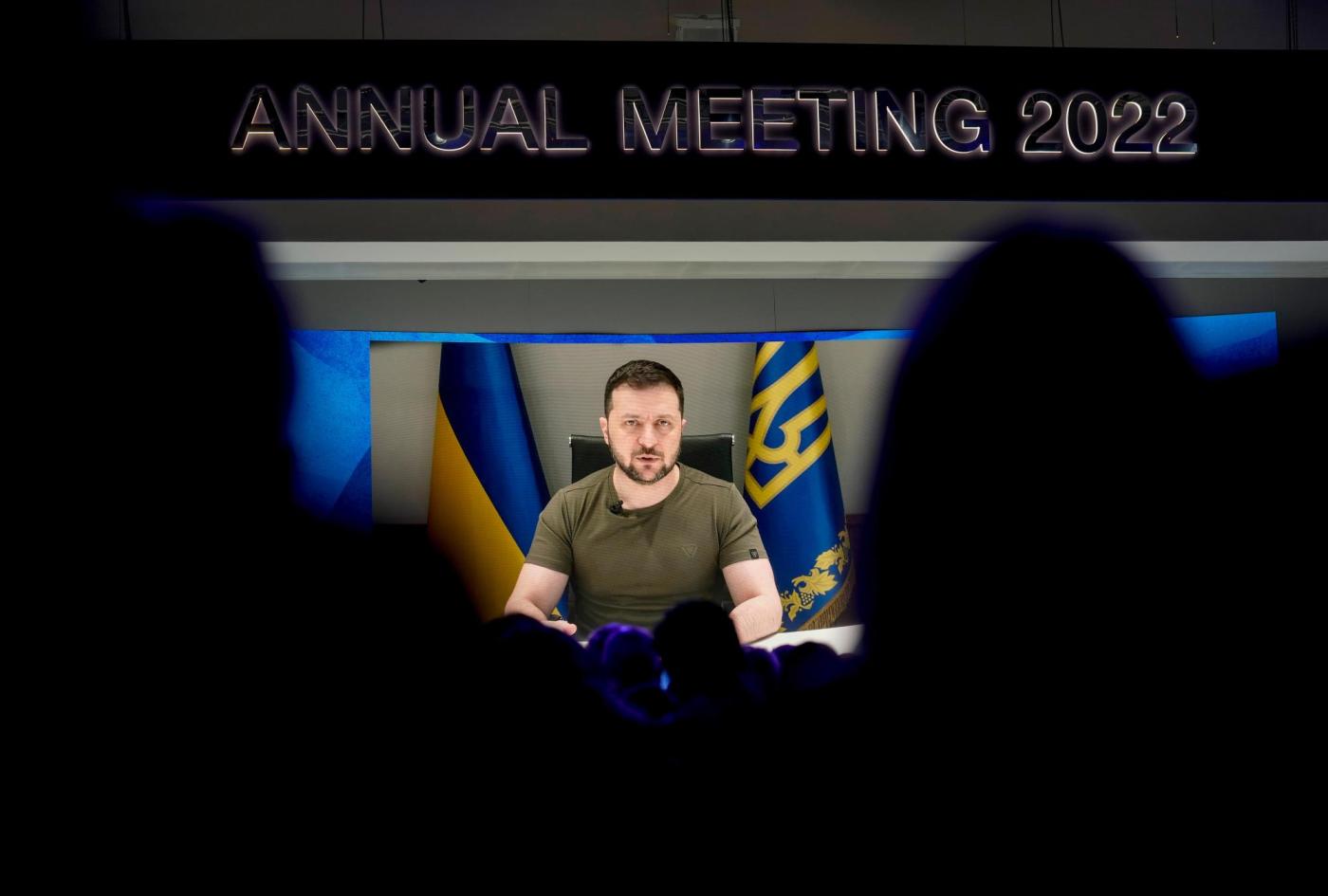 DAVOS, Switzerland — German Chancellor Olaf Scholz expressed hopes Friday for global cooperation on climate change, hunger and war, while dozens of climate activists demonstrated in the Swiss town of Davos as a meeting of global elites ended with many words but little concrete action to solve the world’s most pressing crises.

The German leader ratcheted up his criticism of Moscow’s military onslaught in Ukraine during a speech on the last day of the World Economic Forum’s annual meeting. He said Russian President Vladimir Putin “wants to return to a world order in which the strongest dictate what is right, in which freedom, sovereignty and self-determination are not.”

Voicing hopes for countries to work together on shared crises, Scholz said today’s world is no longer bipolar as it was during the Cold War era — when United States and the Soviet Union dominated geopolitics.

“If some want to take us back to the past of nationalism, imperialism and war, our answer is ‘not with us.’ We stand for the future,” he said in the final major address of the week in Davos. “When we realize that our world is becoming multipolar, then that must spur us on to even more multilateralism, to even more international cooperation.”

As he spoke, scores of young people protested across town behind banners that read “Cut the (BS)!” and “There is no Planet B” — adding a coda of condemnation to the gathering of elites in Davos that is often derided for being more about talk, business and relationship-building than action. Forum organizers reject such claims, insisting they want to improve the state of the world by drawing in decision-makers.

The yearly gathering in the Swiss Alps — twice suspended over the COVID-19 pandemic — has been overshadowed this year by the war in Ukraine, rising food and fuel prices, and signs that governments aren’t doing enough to fight global warning. That has doused many moods in the face of a can-do spirit by many innovators and entrepreneurs on hand for the event.

Ukrainian President Volodymyr Zelenskyy, Foreign Minister Dmytro Kuleba and an array of lawmakers, local officials and business leaders who made the journey or joined by video link captured the spotlight to drum up support for their country’s grueling and uncertain campaign to oust Russian forces.

Russian President Vladimir Putin’s campaign has drawn international scorn and unsettled his allies, and as a result, Russian envoys from business and government who have been staples at Davos since the end of the Soviet Union weren’t invited this year.

Kuleba voiced little hope that the war could come to a negotiated end, or even a pause, anytime soon.

Kuleba has pressed for Western powers to supply Ukraine with weapons like multiple-launch rocket systems and pointed to a “saga” about obtaining Gepard tanks from Germany, among other things his government has discussed with Berlin.

“We clearly understand that Germany will not be a country that will lead the process of supplying Ukraine with heavy weapons we need,” Kuleba said. “Let’s make it clear: If we don’t get heavy weapons, we get killed.”

The upshot of Ukraine’s efforts is to rally countries around a budding democracy with ambitions to join the European Union — the free-world and free-market club — in the face of an onslaught by a Russian regime that clamps down on dissent and centralizes power in one man: Putin.

Meanwhile, a deadly school shooting Tuesday in Texas was on many minds in Davos. More broadly, battles against global warming, a food crisis, and cyberattacks by hackers from Russia and beyond have exposed how progressive leaders from civil society, corporations and government have struggled to cope in a world facing simultaneous crises.

Many touched on the need to find solutions to the blockade of Ukrainian ports, preventing its critical stocks of wheat, barley and sunflower oil from getting to the world and threatening food insecurity in countries in Africa, the Middle East and Asia. The European Union and United States have accused Russia of using food supplies as a weapon and say there have been talks of opening secure shipping corridors.

Russian officials are blaming Western sanctions or Ukrainian mines in the sea.

“This food crisis is real, and we must find solutions,” WTO Director-General Ngozi Okonjo-Iweala said on a trade panel Wednesday.

Davos once again churned up ideas from innovators and officials, but translating those into action could take time — and may not happen at all. The meeting is above all a talkfest, and concrete, high-profile achievements and announcements have been few this year.

Former U.S. Vice President Al Gore, a leading crusader against climate change, briefly railed against failed efforts for gun control in the United States before trumpeting a new system to monitor greenhouse gas emissions by satellite. That will increase needed scrutiny and transparency about the burning of carbon and other planet-warming gases by businesses around the globe, he said.

Gore, who shared a Nobel Peace Prize with the U.N.’s top body on climate science for their work on climate change, pointed to an initiative known as Climate Trace that combines more than 300 satellites with machine learning to create algorithms and zero in on emission hotspots worldwide. It’s expected to release results in October from 500 largest sources of emissions.

“We are about to enter an age of radical transparency,” he said.