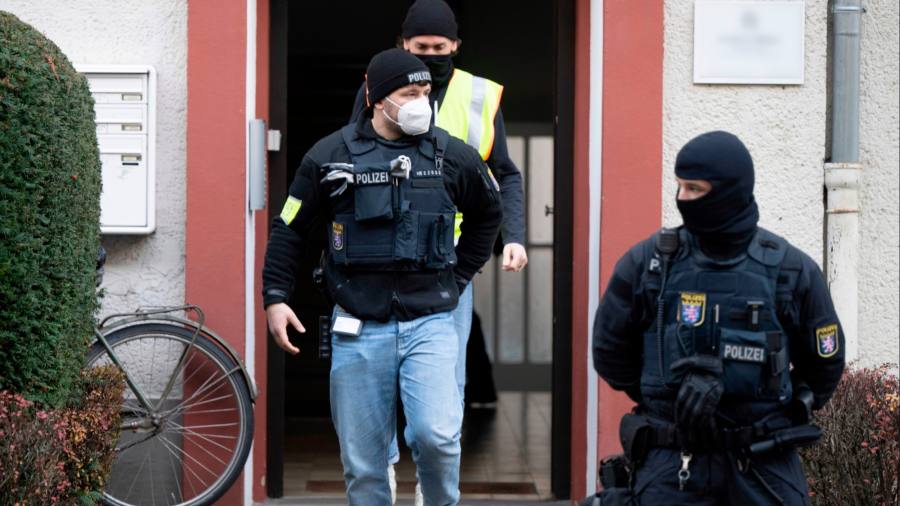 German police have arrested 25 alleged rightwing radicals who are suspected of planning to overthrow the state in a violent coup.

The arrests were carried out as part of a series of raids across the country involving searches of more than 130 premises, indicating an alleged conspiracy on a huge scale.

A statement from the federal prosecutor’s office on Wednesday said those arrested, including two of the ringleaders of the plot, were suspected of being members or supporters of a “domestic terrorist organisation”.

It said that the group, founded in November 2021, aimed to “overcome the existing state system in Germany and replace it with a form of state, the essential features of which were already prepared”.

The conspirators were aware that they could only achieve their aims “by deploying military means and violence against representatives of the state” — and that would involve killing people.

The statement said they were united by a “rejection of state institutions and the Federal Republic of Germany’s liberal democratic constitution”, which had developed into “concrete preparations” for its violent overthrow.

The DPA news agency said that investigators were also targeting a soldier who serves in the KSK, Germany’s special forces unit. It said his house and office in a barracks in the southern town of Calw had been searched. The unit has in the past come under scrutiny over some of its members’ links to far-right groups

It added that members of the group were motivated by conspiracy theories such as QAnon and were linked to the “Reichsbürger” (citizens of the Reich), a radical rightwing movement that does not recognise the authority of the federal republic. “They are completely convinced that Germany is governed by members of the so-called “deep state”, it said.

The prosecutor’s office said the group’s “military arm” planned to violently overthrow democratic institutions in German towns and cities. The group would form a transitional military government that would negotiate a new state system in Germany with the victorious Allied powers of the second world war.

With this objective in mind, it said one of the arrested men, named as Heinrich XIII P. R., had already contacted representatives of the Russian government in Germany. There was so far no evidence, however, that the Russians had reacted positively to his request.

The prosecutor’s statement said the suspects had been preparing their coup since the end of November last year, planning administrative structures, procuring equipment, carrying out firing practice and recruiting new members. The group was led by a “council” with Heinrich XIII P. R. at its head. He is seen by the organisation as a future head of state.

Members of the “council” had, investigators believe, been meeting in secret since November 2021 to plan for the takeover of power in Germany and to set up their own state structures.

Prosecutors said the group’s military arm included former soldiers from the Bundeswehr, Germany’s armed forces. The military unit was in the process of setting up a system of “homeland security companies” that would take control at a local level.

The group sought to acquire recruits among Bundeswehr soldiers and police and scouted out army barracks in southern Germany to see if they could accommodate their own troops after the coup.

Investigators also suspect that certain members of the group had been preparing to storm the German Bundestag, the country’s parliament, with a small armed group.