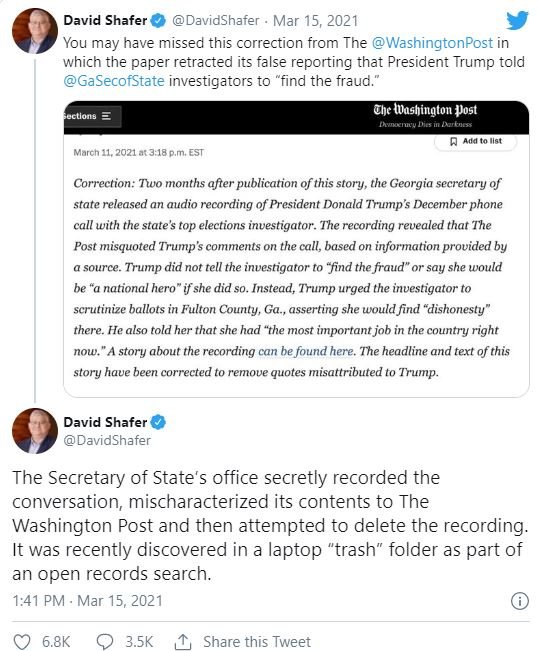 Fani Willis based her investigation on President Trump’s call with Georgia officials that was later doctored and leaked to the fake news outlet Washington Post.  The WaPo published a completely fraudulent text of the call.  These phony charges have already been debunked by The Gateway Pundit and others.

Willis sent out a letter to the Chief Judge on the Fulton County Superior Court on January 20th.

Again — Willis and her handlers are investigating a now-infamous call between former President Trump and Sec. of State Brad Raffensperger, in which Trump pressured the Georgia SOS to uncover what he insisted was fraud that would overturn Georgia’s election results.

The infamous phone call between Trump and Georgia Secretary of State Brad Raffensperger was recorded by Raffensperger and his office.  Raffensperger’s team then leaked and lied about it to the far left Washington Post.

Raffensperger’s office released the dishonest story to the liberal media and it was published on January 9, 2021 — days before the sham Trump impeachment trial!

It was meant to damage President Trump before the fake impeachment.

Georgia Chairman of the Republican Party David Shafer posted this on his Twitter account as the news broke after they all got caught lying about the phone call.

DA Willis screwed up when she sent out her letter on January 20th.   Willis says in her letter that she is “investigating the facts and circumstances relating directly to possible attempts to disrupt the lawful administration of the 2020 election.”

In May local news reported that a grand jury has been selected to investigate Fani Willis’s junk charges against President Trump.

Dirtbag Governor Brian Kemp will participate in the sham investigation this month.

And on Tuesday the grand jury subpoenaed Rudy Giuliani and Lindsey Graham for some reason.

Rudy continues to be a major target for the left.

Mediate reported on Tuesday on Rudy’s subpoena. The far-left outlet uses the already debunked language in its report.

The special grand jury in Fulton County, Georgia investigating former President Donald Trump’s efforts to overturn his loss in the state sent out a bevy of subpoenas on Tuesday.

The grand jury subpoenaed former Trump lawyer Rudy Giuliani, who led the efforts to overturn the results of the election, and Sen. Lindsey Graham (R-SC) – among many others.

The investigation is focused on efforts by Trump and his allies to pressure Georgia election officials to decertify the election result and even “find” Trump votes so that he could win the state in the 2020 presidential election.

Trump was caught on tape on Jan. 2, 2021, pressuring Georgia Secretary of State Brad Raffensperger to “find” him 11,780 votes so that he could win the state – a conversation that Raffensperger later described as threatening.