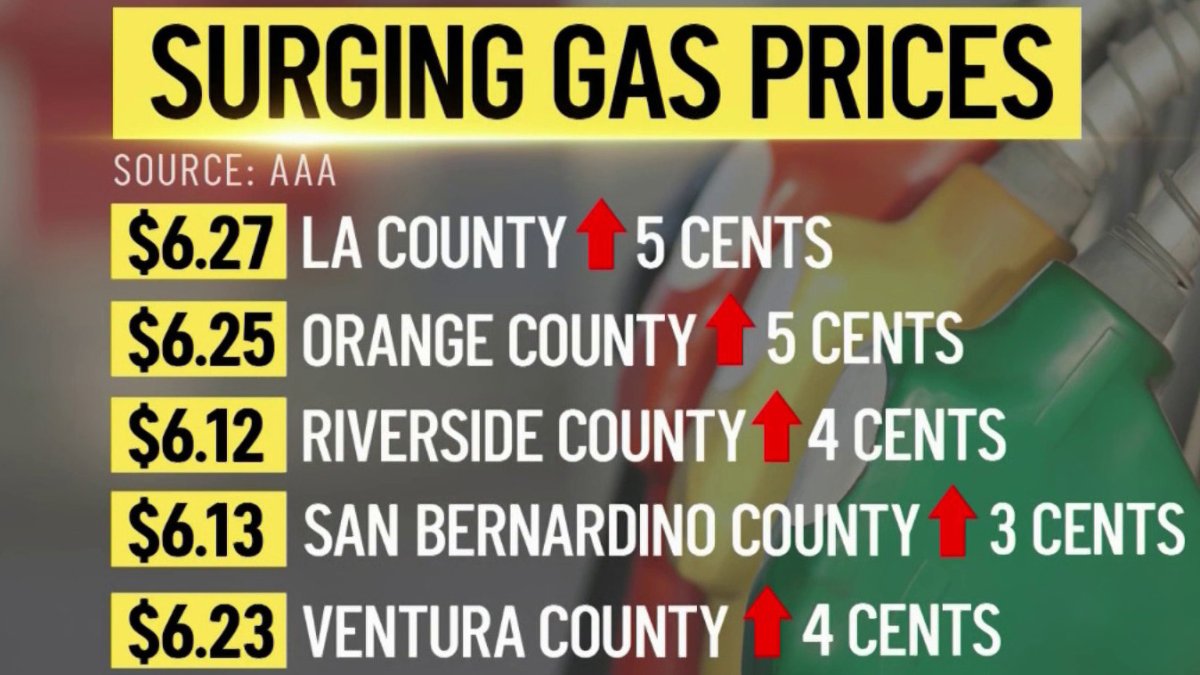 The average price of a gallon of self-serve regular gasoline in Los Angeles County rose to a record Saturday for the eighth consecutive day, increasing 5.5 cents to $6.321, its 10th consecutive increase.

The average price has risen 23 cents over the past 10 days, including 4.5 cents Friday, according to figures from the AAA and Oil Price Information Service. It is 19.5 cents more than one week ago, 49 cents higher than one month ago and $2.084 greater than one year ago.

The Orange County average price rose 6 cents to its eighth consecutive record, $6.306, its ninth consecutive increase. It has risen 24.7 cents over the past nine days, including 4.6 cents Friday.

The Orange County average price is 20.5 cents more than one week ago, 52.6 cents higher than one month ago and $2.116 greater than one year ago.

Crude oil costs account for slightly more than half of the pump price, according to the U.S. Energy Information Administration.

The rest of the price includes the other components of gasoline, production costs, distribution costs, overhead costs for all involved in production, distribution and sales, taxes and carbon offset fees in California paid by the refineries.

The national average price rose 5.2 cents to a record $4.861, its eighth consecutive record and increase and 11th in 12 days. It has increased 22.6 cents over the past 12 days, including 4.9 cents Wednesday, 4.4 cents Thursday and 4.6 cents Friday. The national average has set records 23 of the past 26 days.

High demand for travel heading into summer and continued concerns about global and local supply of gasoline will continue to put upward pressure on pump prices, according to Doug Shupe, the Automobile Club of Southern California’s corporate communications manager.