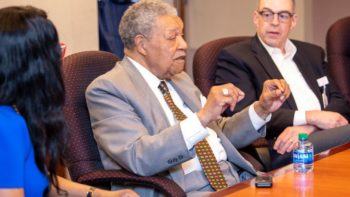 By Ariel Hart and Andy Miller

Facing the looming closure of a hospital in East Point, Fulton County officials and Grady Health System representatives are discussing ways to continue providing for emergency and hospitalization needs in the underserved south county area.

Among the options: Raising the amount of money Fulton County taxpayers provide to the nonprofit Grady Health System. County Commission Chairman Robb Pitts said he hopes to learn whether raising more money could enable Grady to run a scaled-down version of the current hospital, keeping the emergency room and a couple dozen hospital beds open, or even offer the same services in a nearby location.

Wellstar announced its plans April 6 to close the emergency department and inpatient beds at Wellstar Atlanta Medical Center South in order to convert it into a 24-hour walk-in clinic and outpatient rehabilitation center. The East Point facility is the only acute care hospital that exists south of I-20 within Fulton County.

The Atlanta Journal-Constitution was the only media inside a Tuesday afternoon meeting called by Pitts to discuss a response to Wellstar’s plans.

The conversion of the East Point location into an outpatient facility will occur early next month, Wellstar’s CEO said. People with emergencies or other hospital-level cases will be served by other nearby hospitals, said Candice Saunders, the CEO.  Those include Southern Regional Medical Center in Clayton County, or Wellstar Atlanta Medical Center’s main campus in Atlanta, or Grady.

Grady looked into the possibility previously when Wellstar put out a request for proposals to sell that hospital and another, AMC in Atlanta. Ultimately it was deemed too costly, Haupert said. The East Point building required significant modernization of its utilities that would cost $130 million, even before tackling other outdated structures like patient rooms without bathrooms.

The pandemic has so damaged Grady’s own finances that what would have been a 2% margin of profit in the current fiscal year is instead currently projected to be a 5% loss, Haupert said.

Pitts raised the possibility of a county tax increase for Grady and having Grady run the south Fulton facility.

Haupert said Grady couldn’t commit to any of the proposals without learning more.

Pitts said he would discuss the issue with other county commissioners at their regular meeting Wednesday. Two commissioners, Marvin Arrington and Natalie Hall, attended part of Pitts’ Tuesday meeting with Grady.

Pitts also said he would ask Wellstar if it would delay the changes to give the county more time to develop a plan.

Local funding is generally split between Fulton and DeKalb on a ratio to reflect the patient mix at Grady. The two counties are already hoping to meet soon with the city of Atlanta and the governor’s office to discuss Grady’s finances.

Each county commission must vote to approve their county’s portion of Grady’s funding. Fulton currently pays $42.5 million per year and DeKalb pays $12.9 million per year.

Grady’s main hospital nearly closed in 2007 because of massive debts, but its finances have been restructured and strengthened in recent years.

When Wellstar announced the closure, it said too few of the patients who walk in the door of the East Point hospital ended up getting admitted for full hospital care. Wellstar could not provide statistics on those who needed emergency department-level care and then left without staying overnight. But officials said that only 7 in 140 emergency room patients a day on average ended up getting admitted to the hospital.

Most importantly, the hospital is not a destination for lucrative medical services. When Wellstar bought the troubled East Point facility in 2016 along with other hospitals, it was the North Fulton Hospital in Roswell that was the prize. The East Point hospital would have required investment to make it a draw for specialists and operations.

Wellstar Health System in recent years has been exploring options – including a sale or partnership — for its Atlanta Medical Center and the affiliate hospital in East Point.

Last year, a Wellstar advisory board said Wellstar had not invested sufficiently into the East Point hospital and called for the nonprofit system to inject more resources and more effort into invigorating it.

A letter to the chairman of the Wellstar Health System board of trustees from Lisa Medellin, chairman of the volunteer board, obtained by Georgia Health News, stated, “The evidence of an authentic plan and appropriate strategy appears non-existent for revitalizing the AMC Downtown and East Point hospitals.’’

Both of the Atlanta Medical Center hospitals have been struggling financially. American Hospital Directory, in data reported earlier this year, listed the two combined with a slight $850,000 profit on $2 billion in revenues. The two hospitals had long suffered problems with aging infrastructure.

Wellstar told the AJC that in 2021 alone, the Wellstar Health System overall provided $915 million worth of care that it never got paid for, or got underpaid for, “reflecting its promise to serve all people in our communities.”

Wellstar Health System has 11 hospitals, including the East Point facility at the moment, as well as more than 300 medical office locations, cancer centers, rehabilitation centers, and a retirement village. It listed its 2020 net assets at $1.8 billion.

Grady Health System is metro Atlanta’s main safety-net hospital, seeing more than 700,000 patient visits a year in both the main hospital and other clinics and offices. It hosts the state’s premier trauma center.

EDITOR’S NOTE: This article has been changed to note that Fulton County Commission Chairman Robb Pitts did not add the hospital issue to the agenda for the Wednesday county commission meeting after all.