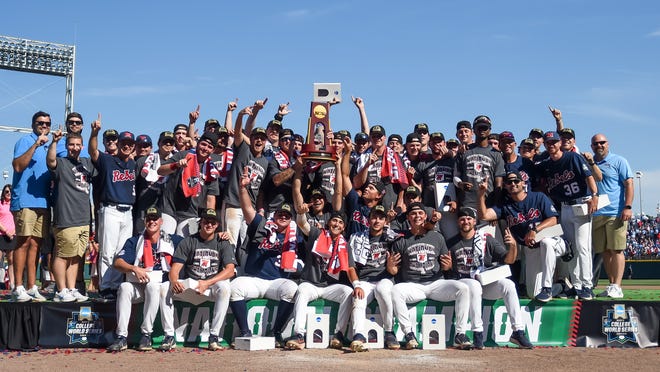 OMAHA, Neb. — Of all the Ole Miss baseball teams, in all of coach Mike Bianco’s 22 years, after all the ups and downs and heartbreaks and close losses and tribulations and downright bummers, this is the team that finally brings a trophy to Oxford.

This team, that fell from No. 1 in the polls in March to 7-14 in SEC play and in jeopardy of missing the conference tournament on May 1.

This team, that benched all of its starting pitchers in April and had to rely on a junior college transfer and a freshman to save its season.

This team, that lost four straight series in April, lost cleanup hitter Kevin Graham for a month to a wrist injury, lost sophomore Calvin Harris to an oblique injury when he was batting .524 and lost transfer portal pitchers Jack Washburn and John Gaddis to an ankle injury and an appendectomy in April.

This team, that was the last at-large bid selected into the NCAA Tournament.

This team is the last team standing. Champions of the world. The team that brings Oxford back the trophy it so dearly wanted.

It’s impossible to overstate the improbability of all this. Ole Miss wasn’t just bad two months ago. The Rebels were so bad they were making bad teams look good. Alabama, South Carolina and Mississippi State took series from the Rebels in three consecutive weeks and all missed the NCAA Tournament.

Then, after May 1, something clicked. The Rebels won 18 of their last 22 games, outscoring opponents 160-74. Ole Miss went 10-1 in 11 NCAA Tournament games, pitching three shutouts and averaging 7.5 runs per game.

Everything culminated in five wins at Charles Schwab Field, matching the number of College World Series wins the Rebels had in their history before this trip.

“Life is tough, and there’s bad things that happen to everybody,” Ole Miss coach Mike Bianco said. “Good people, bad things happen. These guys have worked really hard, and I think they’ve showed a lot of people that you can fall down, you can stumble and you can fail, but that doesn’t mean you’re a failure. If you continue to work hard, you continue to push and you continue to believe, as Tim said, you can accomplish anything.”

Closer Brandon Johnson recorded the last out of Sunday’s decisive win against the Sooners (45-24). He struck out the side on 14 pitches then blacked out. The senior said he usually has a choreographed celebration for every save. This time, he had nothing. After all the team had been through, he felt nothing. No performance. No celebration. Just pure, uninterrupted shock.

Then his teammates spilled out of the dugout and came chugging his direction. Senior Ben Van Cleve cautioned his teammates to get ready for pain. He warned them they might have to endure three or four minutes of discomfort on the bottom of the pile because it wasn’t moving.

Graham’s emotions oscillated between shock and exhilaration. One moment he looked dumbfounded. The other he was crying.

Tournament Most Outstanding Player Dylan DeLucia was all smiles. The Game 1 winning pitcher  greeted his family down the first base line with spinning hugs and promises to party.

Senior Max Cioffi is one of the few players who’s been on the team since 2018. He endured a home regional loss as a national seed his freshman year, a super regional loss one win short of Omaha his sophomore year, the elimination of his junior season by COVID-19, a Tommy John surgery that took away his senior season and all the ups and downs of 2022.

Through all that, Cioffi knows this team is the one that won it all.

“There was just so much failure,” Cioffi said. “We were so close for so long. Gosh. But I tell you what, it’s worth it. It sure is worth it.

Before Loretta Lynn died, she asked Mississippi’s Chapel Hart to remake one of her songs