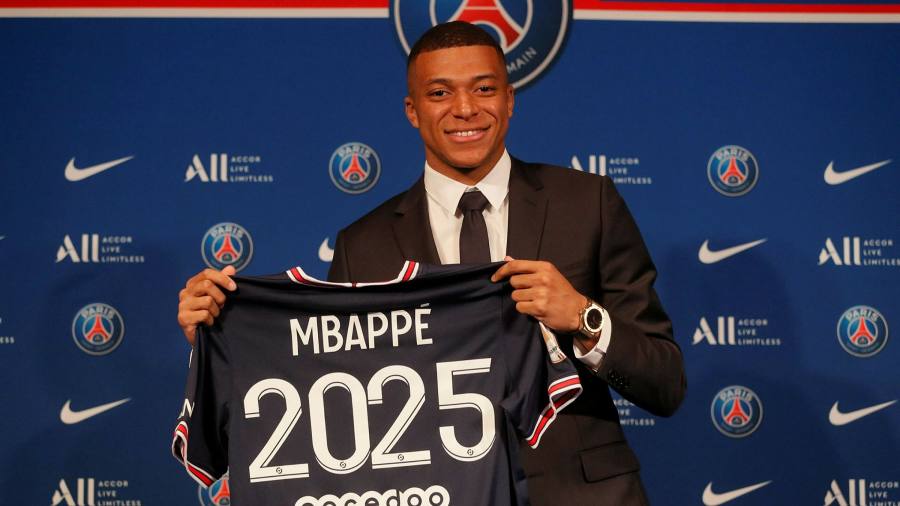 French footballer Kylian Mbappé is following fellow superstars Cristiano Ronaldo and Lionel Messi into the world of non-fungible tokens by becoming an investor in a SoftBank-backed fantasy football platform.

Mbappé, 23, will also become a brand ambassador for Sorare, which operates an online game where players can create football teams based on the digital trading cards they own.

Football players, clubs and leagues have been rushing to tap into the growth of digital assets, such as tradable NFTs and so-called fan tokens, as a way to monetise their global fan base and generate revenue on top of broadcast and sponsorship deals.

Crypto companies have also courted sports teams, signing stadium and shirt sponsorship deals, with the aim of breaking through to the huge global audience that follows sport.

That trend has continued unabated despite the current turmoil roiling the market for cryptocurrencies and the increasing scrutiny on digital fan tokens, most of which have seen their value collapse within days of launch.

The UK financial regulator warned consumers about the danger of investing in such markets earlier this year, saying: “If you buy crypto assets you should be prepared to lose all the money you invest.”

Such warnings have not deterred big-name players from embracing the nascent market. Ronaldo inked a deal last week to promote NFTs for crypto exchange Binance, while Lionel Messi agreed a deal earlier this year with Socios, the fan token company.

Sorare hopes that signing up a player widely seen as the world’s best will help boost its limited profile. Mbappé has a combined Twitter and Instagram following of more than 80mn, compared with Sorare’s 155,000.

The Paris-based start-up hit a valuation of $4.3bn last year when it raised $680mn in a funding round led by SoftBank’s Vision Fund 2. The company, which says it has been profitable since its early days, also counts tennis star Serena Williams and Spanish footballer Gerard Piqué among its backers. It is due to launch a fantasy baseball game later this year after agreeing a deal with Major League Baseball.

The company declined to provide any financial details of its deal with Mbappé.

Although it operates an exchange for its NFT player cards, the company has sought to distance itself from other digital asset platforms by downplaying the notion that players can make money through trading the digital cards.

“What sets us apart is we have a utility for the NFTs, which is a game. We are building a gaming company,” said Nicolas Julia, Sorare’s chief executive. “I see the technology as an enabler to provide what we want to provide. But it’s not an end — so you don’t see the word NFT in our product.”

However, the company also noted that its card trading volumes had grown more than 260 per cent in the first half of the year compared with a year earlier.

Mbappé’s deal with the French start-up comes soon after he signed a new contract with Qatari-owned Paris Saint-Germain. The striker’s importance to the country as a cultural asset was underscored by the involvement of President Emmanuel Macron in convincing him to stay in France and reject a move to Spain.