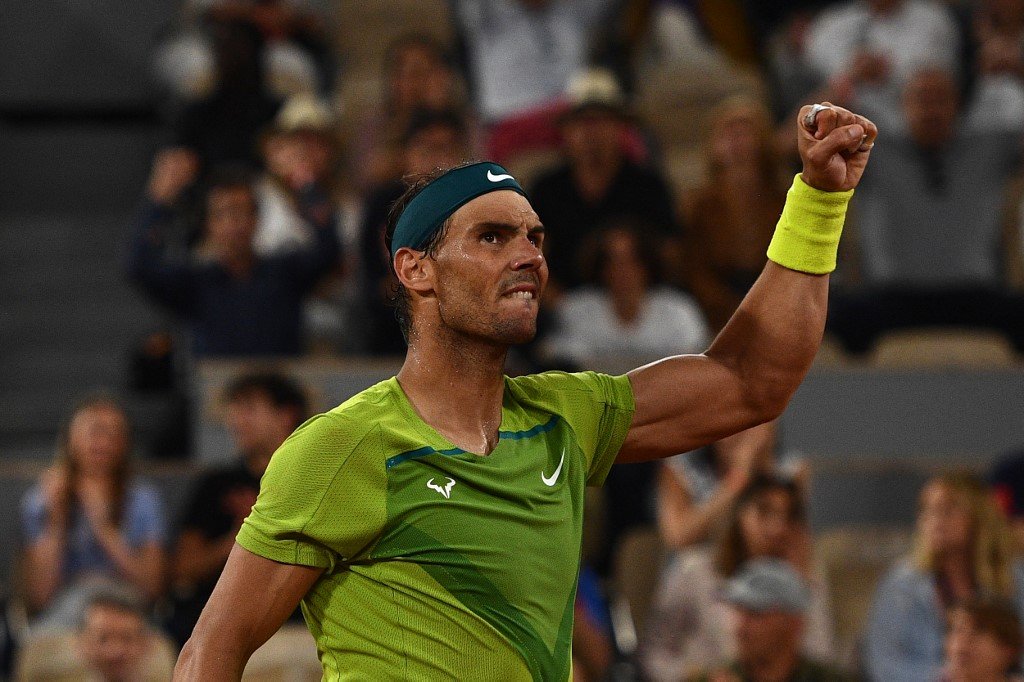 Spain’s Rafael Nadal reacts after a point against Germany’s Alexander Zverev during their men’s semi-final singles match on day thirteen of the Roland-Garros Open tennis tournament at the Court Philippe-Chatrier in Paris on June 3, 2022. (Photo by Christophe ARCHAMBAULT / AFP)

PARIS – Victory at Sunday’s French Open final for Spaniard Rafa Nadal would be the biggest achievement of his career, topping even his unexpected success at this year’s Australian Open where he won a record 21st Grand Slam, his coach Carlos Moya said on Saturday.

Nadal, bidding for a 14th title at the French Open, faces 23-year-old Norwegian Casper Ruud, who has trained at the Spaniard’s academy in the past and is currently the most successful clay player per titles won on the surface since 2020.

“What I saw in Australia this year it was beyond anything. But what I see here is through his own play. It’s a another size of resilience,” coach Carlos Moya told Reuters.

“I think it would be a bigger achievement winning the French Open today than the Australian Open,” he said. “It’s special if he wins. In my opinion, this is the one that he deserves the most credit in his career.”

At the final in January’s Australian Open, Nadal, who turned 36 on Friday, came from two sets down to beat Daniil Medvedev and bag a second title there.

A couple of months earlier he was even considering retiring after a foot problem that has troubled him throughout his career resurfaced, forcing him to miss much of the 2021 season including Wimbledon, the Olympics and the U.S. Open.

He had arrived in Australia underprepared and not in the best of health after also suffering a bout of COVID-19. But Moya said it was even tougher in Paris, where Nadal brought a doctor to get through the tournament despite the foot injury.

“The preparation for Australia was nothing, and here even less, but it’s clay,” Moya said. “Alright, so that changes a little bit. Things happened here that maybe put this on top of Australia.”

Nadal was pushed to five sets by Felix Auger-Aliassime in the fourth round and needed another four to oust main title rival Novak Djokovic in the last eight.

On Friday he was 7-6 6-6 up against in-form Alexander Zverev until the German twisted his ankle and had to retire. Moya, himself a former French Open champion, acknowledged there was no way to know how that match would have turned out if it had been played to the end.

“Of course, he could have lost the last two matches,” Moya said. “He somehow survived.”