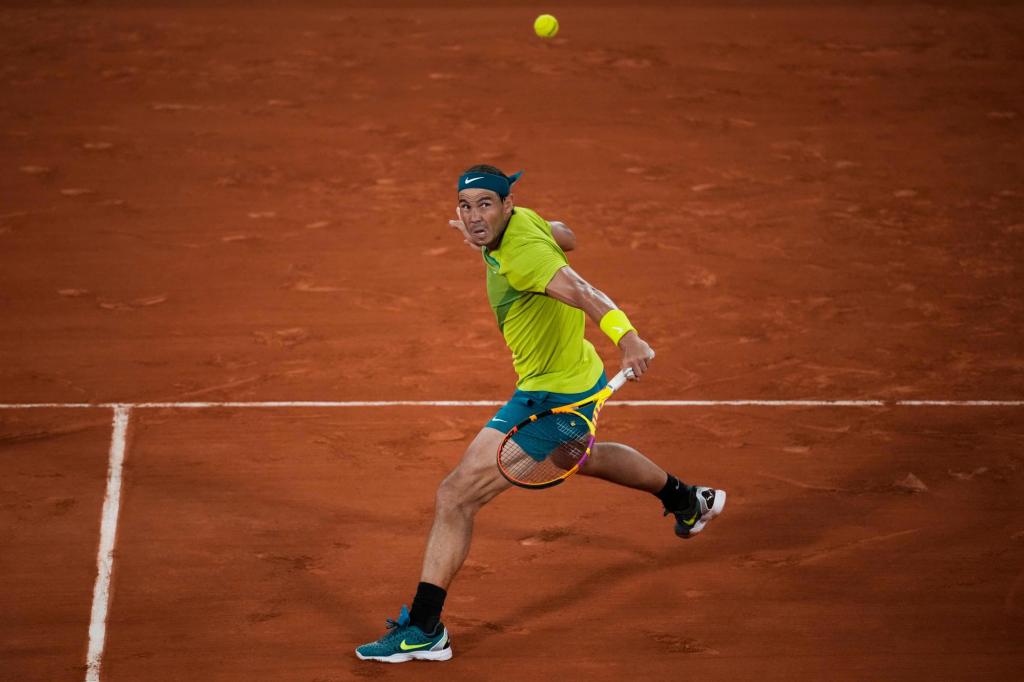 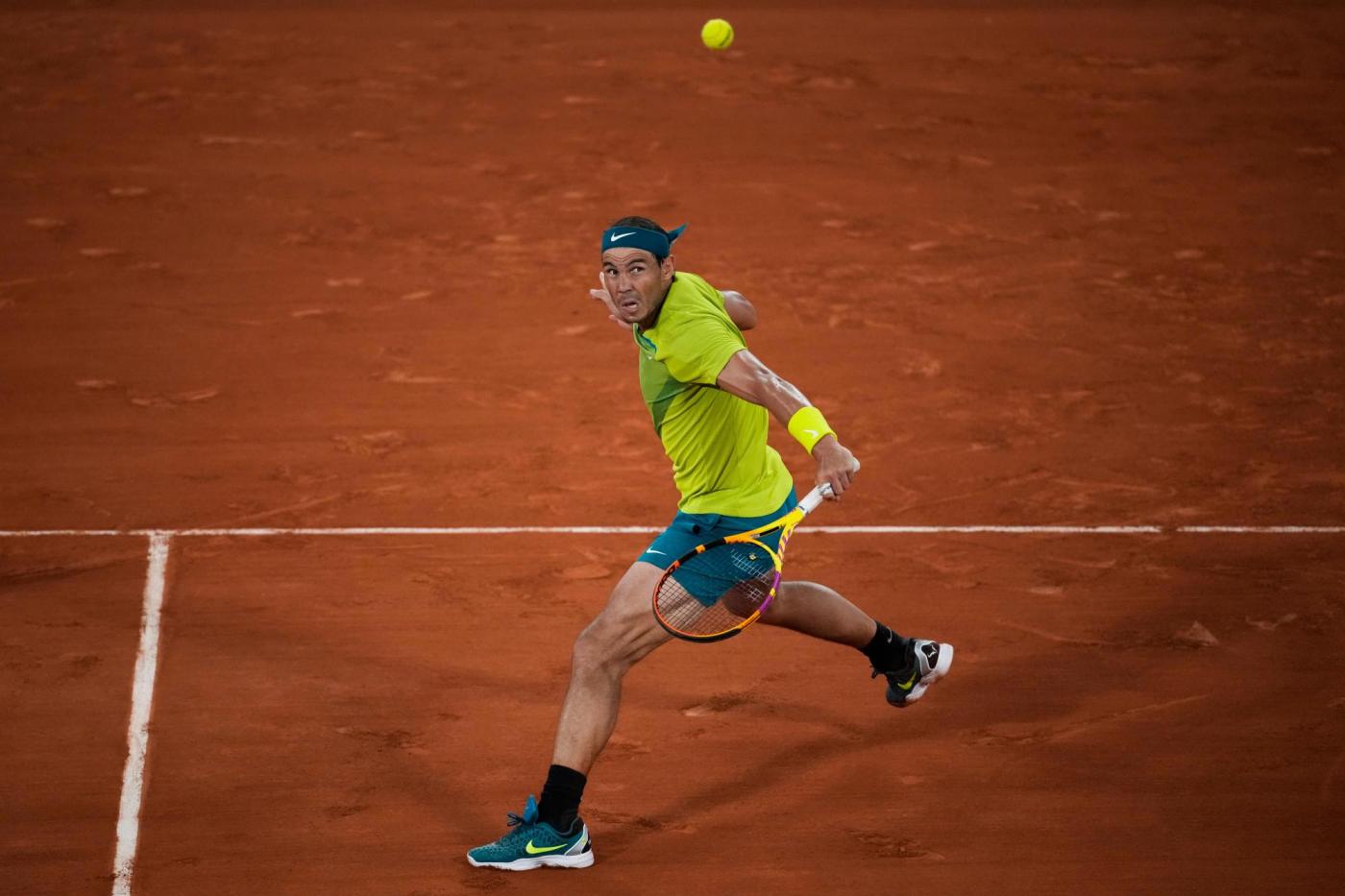 Rafael Nadal told TV rights holder Eurosport in an interview on court after the French Open final that he played the match with “no feeling in” his left foot after getting an “injection on the nerve.”

He has been dealing with chronic pain in that foot and has repeatedly said he could never be sure when he might be playing his last match at Roland Garros.

Nadal described that foot as being “asleep” on Sunday.

Nadal won the last 11 games after trailing 3-1 in the second set.

Nadal’s victory Sunday came two days after his 36th birthday and made him the oldest title winner in the history of the clay-court tournament.

The Spaniard’s first triumph here came in 2005 at age 19. No man or woman ever has won the singles trophy at any major event more than his 14 in Paris.

And no man has won more Grand Slam titles than Nadal.

He now is two ahead of rivals Roger Federer, who hasn’t played in almost a year after a series of knee operations, and Novak Djokovic, who missed the Australian Open in January because he is not vaccinated against COVID-19 and lost to Nadal at Roland Garros.

The eighth-seeded Ruud is a 23-year-old from Norway who was playing in his first Grand Slam final.

Rafael Nadal is one set away from a 14th French Open championship and 22nd Grand Slam title in all.

Nadal has grabbed the first two sets of Sunday’s final against Casper Ruud and leads 6-3, 6-3.

Ruud led 3-1 in the second set after Nadal double-faulted to get broken at love. But Nadal righted himself to claim the next five games.

The match is 1 hour, 42 minutes old and the clouds overhead at Court Philippe Chatrier have given way to a blue sky.

Rafael Nadal has taken the opening set of the French Open men’s final against Casper Ruud by a 6-3 score.

The match began with three consecutive breaks of serve. That put Nadal ahead 2-1. He would break again to lead 4-1.

It is cloudy and breezy but there has been none of the rain predicted in the forecast.

The French Open men’s singles final between Rafael Nadal and Casper Ruud has started under a cloudy sky and with the temperature at about 70 degrees Fahrenheit (20 Celsius).

There is rain in the forecast for Sunday. Court Philippe Chatrier has a retractable roof that is open to begin the match.

Ruud is playing in his first Grand Slam final.

Moretton said the last pre-pandemic Roland Garros with full attendance, in 2019, had 262 million euros in revenue, which is about $280 million.

The 2022 attendance was 613,500 spectators at the refurbished site, a jump from 519,000 three years ago. Crowds were limited by restrictions imposed in 2020 and 2021 because of the coronavirus pandemic.

Both Moretton and first-year tournament director Amelie Mauresmo said at Sunday’s news conference before the men’s singles final between Rafael Nadal and Casper Ruud that a full review of the 2022 event would be held soon.

Mauresmo said she was surprised by the “harsh comments” directed her way after she told reporters at a news conference Wednesday that only one of 10 night sessions during the French Open showcased women’s matches because she thinks men’s tennis currently has more “appeal.”

Mauresmo, who later apologized in a TV interview, referred Sunday to what she said about women’s tennis as “this clumsiness of mine.”

France’s Caroline Garcia and Kristina Mladenovic have earned their second women’s doubles championship at Roland Garros as a team with a 2-6, 6-3, 6-2 victory over the American pairing of singles runner-up Coco Gauff and Jessica Pegula.

Sunday’s final came a day after the 18-year-old Gauff lost to Iga Swiatek in the singles title match.

Garcia and Mladenovic also won the French Open together in 2016. Mladenovic now owns six Grand Slam women’s doubles trophies in all, including four that she won with Timea Babos as her partner.

Gauff, who is from Florida, and Pegula, a 28-year-old from New York, were appearing in a major doubles event together for the first time.

Alexander Zverev says “it looks like” he tore “several lateral ligaments” in his right foot during his French Open semifinal against Rafael Nadal.

Zverev posted on Instagram a photo of himself standing in front of an airplane with a pair of crutches and with a walking boot on his lower right leg.

“Based on the first medical checks, it looks like I have torn several lateral ligaments in my right foot,” Zverev wrote. “I will be flying to Germany on Monday to make further examinations and to determine the best and quickest way for me to recover.”

The 25-year-old German hurt himself while chasing after a shot late in the second set against Nadal on Friday. Zverev crumpled to the ground, grabbed his right ankle and wailed in agony.

He was taken off the court in a wheelchair, then returned on crutches to say he was retiring from the match.

The third-seeded Zverev was appearing in the semifinals at Roland Garros for the second year in a row. He was the runner-up at the 2020 U.S. Open and won a gold medal in singles at the Tokyo Olympics last year.

Rafael Nadal and Casper Ruud will meet in the men’s singles final at Roland Garros on a cool, cloudy and breezy afternoon.

The temperature is around 70 degrees Fahrenheit (20 Celsius) and there is rain in the forecast. Court Philippe Chatrier has a retractable roof, which was closed for Nadal’s semifinal.

Also on Sunday’s schedule is the women’s doubles final, with singles runner-up Coco Gauff and her American partner, Jessica Pegula, facing France’s pair of Kristina Mladenovic and Caroline Garcia. That match has started.

Nadal is seeking his 14th championship at the French Open and 22nd Grand Slam title overall. Both of those totals would extend records he already owns.

Ruud is playing in a major final for the first time.