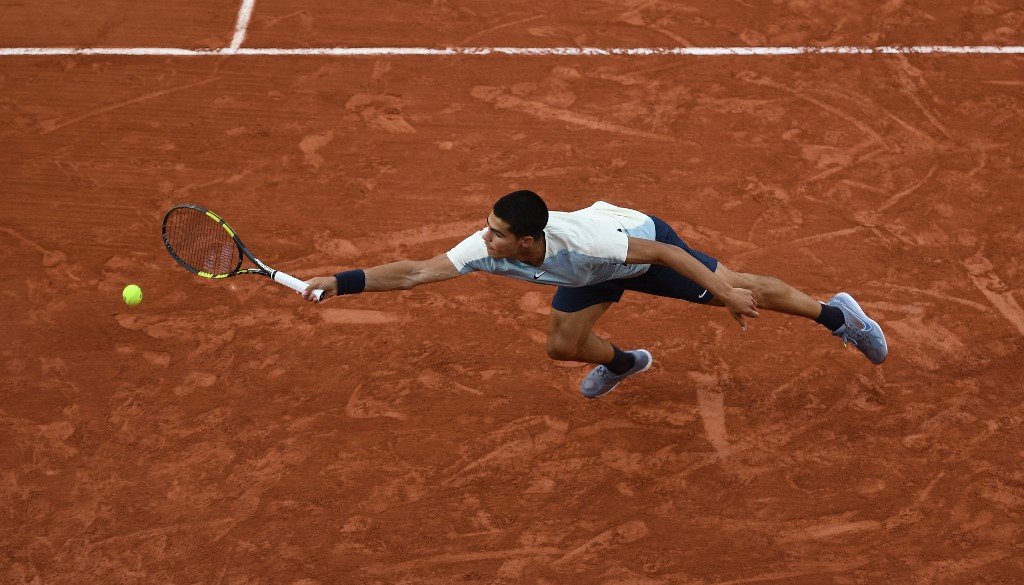 Spain’s Carlos Alcaraz stretches to return the ball to Spain’s Albert Ramos-Vinolas during their men’s singles match on day four of the Roland-Garros Open tennis tournament at the Court Simonne-Mathieu in Paris on May 25, 2022. (Photo by Christophe ARCHAMBAULT / AFP)

Teenage sensation Carlos Alcaraz of Spain outlasted countryman Albert Ramos-Vinolas in a match that lasted more than 4 ½ hours on Wednesday at the French Open in Paris.

“I feel tired but it has been a great battle against Albert,” Alcaraz said. “I knew it was going to be a great match, a tough match. We both fought until the last point. I’m so happy with the performance today.

“This is the worst he (Baez) will probably ever feel on a tennis court right now, this moment,” Zverev said. “It was such an incredible match, and I know it just too well because I lost the U.S. Open final from being two sets to love up. You always get better from it and I wish him nothing but the best. He’s an unbelievably great kid, and he’s going to do a lot of great things in this sport, I think.”

Top-seeded Novak Djokovic and No. 5 Rafael Nadal were also winners in straight sets.

Ninth-seeded Canadian Felix Auger-Aliassime won in straight sets, as did No. 10 Cameron Norrie of Great Britain.

Other seeded players to win and advance Wednesday included Americans No. 27 Sebastian Korda and No. 23 John Isner, No. 18 Grigor Dimitrov of Bulgaria, and No. 26 Botic Van De Zandschulp of Netherlands.