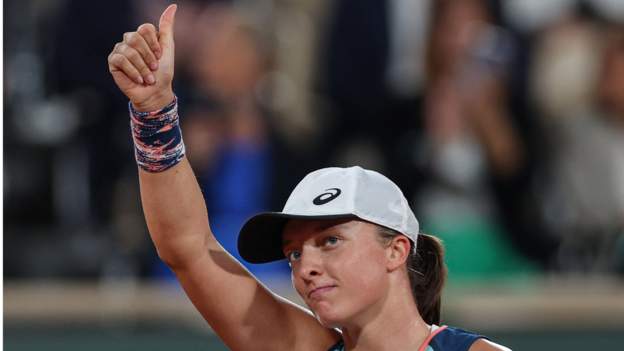 World number one Iga Swiatek underlined why she is the overwhelming favourite for the French Open with a rapid first-round win over Lesia Tsurenko.

Poland’s Swiatek showed all her quality in a 6-2 6-0 victory that took just 54 minutes on Court Philippe Chatrier.

The 20-year-old, who won Roland Garros in 2020, extended her winning streak to 29 matches by beating the Ukrainian.

Czech second seed Krejcikova, who has been sidelined this year with an elbow injury, looked like she was heading for a straightforward win before French 19-year-old Diane Parry fought back to triumph 1-6 6-2 6-3 in front of a delighted home crowd on Chatrier.

Japanese former world number one Osaka was beaten 7-5 6-4 by Amanda Anisimova in a high quality encounter.

American Anisimova, who reached the French Open semi-finals in 2019, will face Croatia’s Donna Vekic in round two.

‘I know the streak will some day stop’

Few women have begun a Grand Slam with the odds stacked as heavily in their favour as Swiatek does in Paris.

Since a run to the Australian Open semi-finals in January, she has dominated the women’s game and won her past five tournaments.

A few days later Swiatek won the Miami Open, then went on to triumph in Stuttgart and Rome.

The power and accuracy of her groundstrokes, plus near-impenetrable defensive skills, have proved too good for her opponents, with Tsurenko the latest to be swatted aside.

“I just want to keep going. I know the streak will some day stop but I’m just focusing on my game and not the numbers.”

Swiatek will face American Alison Riske or Ukraine’s Dayana Yastremska in the second round.

Osaka, who struggled with an Achilles injury in the build-up to the tournament, served eight double faults as she was let down by her serve.

She said she was worried about the reception she would receive on her return to Paris after withdrawing from last year’s event because of mental health struggles.

Both she and Anisimova were warmly received by the crowd on Suzanne Lenglen, with the fans rallying behind Osaka as she fought to keep Anisimova at bay.

After fighting back from an early break of serve, Osaka was broken on a huge double fault at 5-5 in the opening set.

Anisimova then produced a near-flawless service game to take the opening set with a forehand winner.

She dealt with pressure from Osaka in the second set, breaking on a double fault and saving three break points in the next game to keep a 5-3 lead.

Anisimova created three match points on her serve and looked shaky as she sent two into the net, before a winner down the line wrapped up victory.