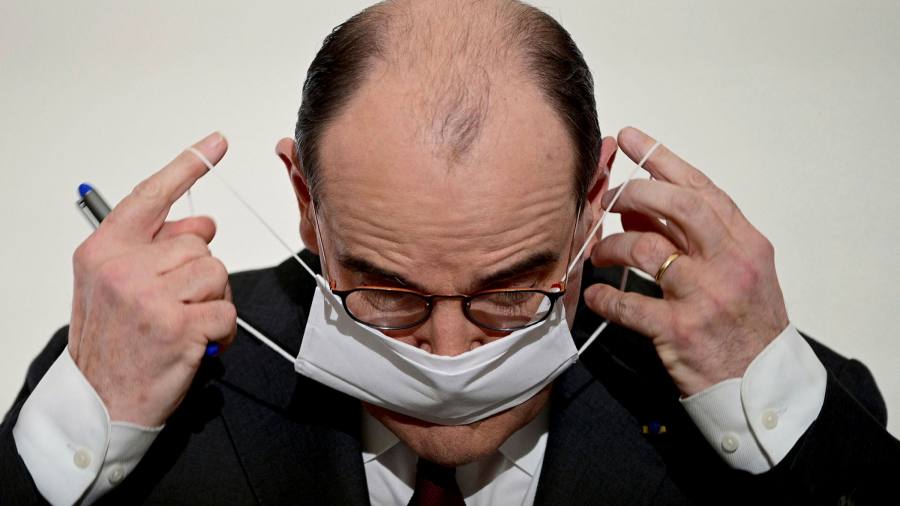 President Emmanuel Macron’s government has put Paris and several other regions under strict lockdown for a third time as hospitals run out of intensive-care beds for Covid-19 patients.

The new rules for 16 French departments represents a hardening of the 6pm-6am curfew that has been in place since January. Most stores will close save for those selling food and other necessities, travel between regions will be banned, but schools will remain open — a key government priority.

“The pandemic is accelerating,” said prime minister Jean Castex on Thursday. “The situation is worsening and it is our responsibility to act so it does not get out of hand.”

The new rules will take effect on Friday night and last at least four weeks, he added. They will apply to roughly 20m people, not only in Paris but across much of the north up to Calais and Dunkirk, and in the southern coastal region around Nice.

In France, new daily infections have risen to above 30,000 nationally in recent days, up more than 20 per cent in a week for an incidence of 266 per 100,000 people. That is worse than the daily rates of new infections being logged in other countries like Germany at 10,000, Italy at 22,000, and Spain and the UK around 5,000, according to the FT’s Covid tracker.

In the greater Paris region, the figure has climbed to 446 per 100,000 people, said the prime minister, and 1,200 people are in intensive care, a higher number than during the second surge in the autumn.

Castex promised to let people have more freedom to carry out activities outside in parks and gardens without daily time limits, unlike during earlier lockdowns. The government has also made other small concessions, such as keeping bookshops and music stores open, measures aimed at placating the population, which opinion polls have shown to be suffering from higher rates of depression and anxiety.

The tightening of rules in the Paris region, which generates one-third of the country’s economic activity and is home to 12m people, is a major setback for the government. Since January, Macron has sought to avoid further lockdowns at all costs, while racing to speed up the vaccination of the population.

While some of France’s neighbours such as Britain and Germany resorted to national lockdowns earlier this winter to fight the emergence of new variants of the virus, France had opted for a less severe nightly curfew and the continued closure of bars, restaurants and entertainment venues.

Castex also said that France would start vaccinating people again with the Oxford-AstraZeneca jab on Friday afternoon after the EU’s drugs regulator said it was “safe and effective” despite reports of rare blood clots in some people who had received it.

A panel of health advisers to the government is set to issue recommendations on Friday morning on whether public information on the Oxford/AstraZeneca needed to be modified.

More than a dozen European countries, including France, had paused use of the vaccines on Monday while the EMA studied the issue.

“I will be vaccinated tomorrow with the AstraZeneca vaccine to show that we can all have total confidence,” said Castex. “I have no doubt that trust will return in this vaccine although it might take a bit of time.”