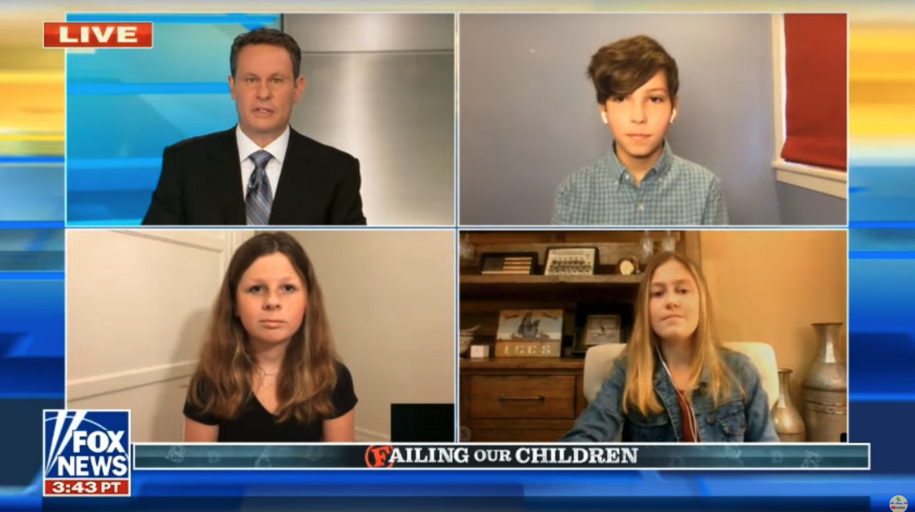 The first child, identified as Mason Seder, “sixth grader in Philadelphia,” tells Kilmeade that he has yet to return to in-person school, but has been told that he will get to return starting next week. Kilmeade, like a bull in a classroom full of children, asks in his most accusatory fashion “How you doing? Are you learning anything?”

Seder responds that he has learned some things, he believes his “teachers are doing a great job, but it’s not what it could be if you’re in person.” Kilmeade, having cracked the code on how in-person learning is preferable to being in a fucking pandemic, then moves on to an eighth grader from California who is in a hybrid model, in class two days a week, the rest at home. Kilmeade prefaces his question to Lilly Rauzon by saying the danger in California is “infinitesimal.” Rauzon says that it is a lot to juggle and while she continues to do alright her brothers have been having a hard time. Rauzon, like every single person in America, says that it will be much better when kids can attend school full time once again.

Kilmeade’s job here is to take these children’s statements of facts, and try to spin them into outrage at liberals. But Kilmeade needs like 100 years of in-person schooling to be considered smarter than shoe polish, and he flabergastedly exclaims that he’s “never heard of this, you have to, you get your assignment and you do it at home????” I mean, of all the things to jump on that are problematic about virtual learning, having a homework assignment is close to, if not at the bottom on the list.

After asking another eighth grader from California, who says that while she is not failing she would probably do better in-person at school, Kilmeade goes back to Mason Seder, by asking this most convoluted question: “Mason, you’ve [sic] trying so hard to get your teachers and everybody to understand how bad it is learning at home, how close are you to getting back in the room? What do you miss most about not being in school?”

Seder, America’s hero today, says that he most misses seeing his friends and the after school activities in which he would normally participate. But Mason is optimistic about our future, saying that he knows we are “very, very close to getting back to school.” In fact, because Kilmeade doesn’t understand cause and effect, young Master Seder explains that “I think that the way our new president is handling things is a very good way, and we would not have gotten to this if it were still the last president.”

A single tear of joy and hope for humankind just rolled down my cheek.

Kilmeade, who has never met a smile, can’t let this attack on American values stand, saying “Really? It’s hard to believe because the last president was saying I want every kid back in school. So um,” and off to asking another student.

You can watch the whole thing below. The fun starts at around the 26:45 mark: