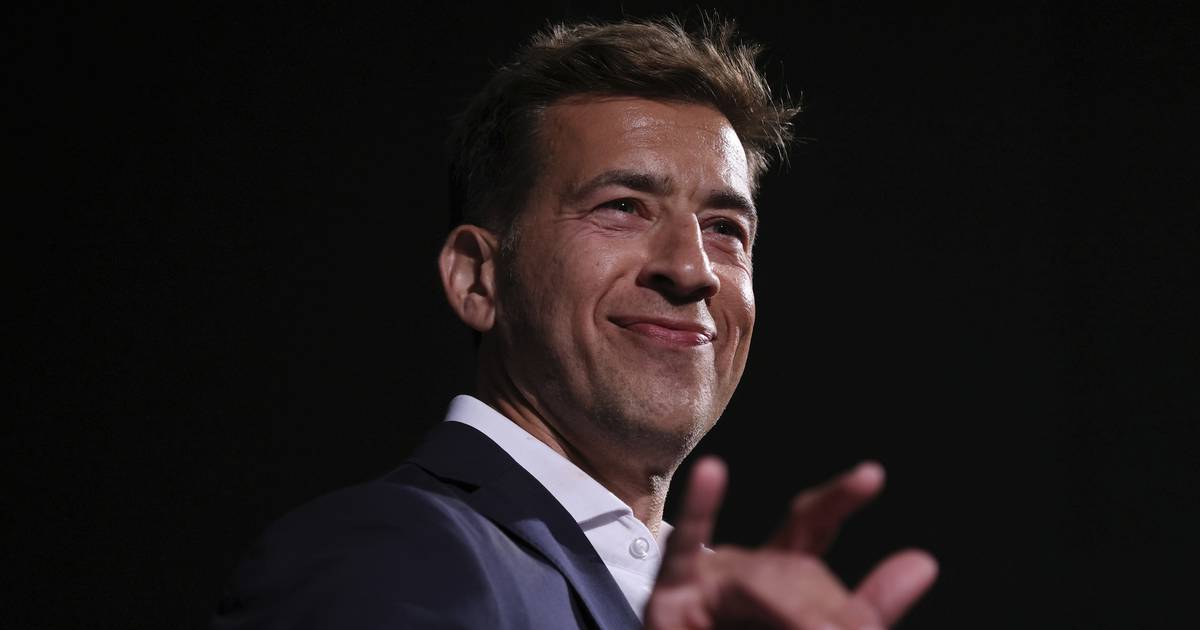 Former Illinois Treasurer Alexi Giannoulias succeeded Tuesday in the first step of his political comeback attempt, defeating three rivals in the Democratic primary for secretary of state and setting up a Nov. 8 general election matchup with Republican state Rep. Dan Brady of Bloomington.

In the Democratic secretary of state primary, Giannoulias had 53% of the vote and Chicago City Clerk Anna Valencia had 34% with 65% of precincts reporting, according to unofficial results. Chicago Ald. David Moore, 17th, and Sidney Moore of Homewood each had less than 10% of the vote, those results showed.

Giannoulias’ two young daughters and his wife, who is expecting their third child in a week, were beside him as he took the stage to the theme song of the new “Top Gun” movie.

“I make no comparison, but I’m a big fan of Maverick getting back into the race,” Giannoulias said in a reference to that movie.

As his general election campaign begins, changes to state ethics rules are at the top of his agenda, he said.

“We will repeal the corruption tax that has plagued our state for too long,” Giannoulias said. He also wants to make government services such as driver services facilities more efficient and less time consuming for Illinois residents if elected, he said.

On the GOP side, Brady led with 77% of the vote compared with 23% for former federal prosecutor John Milhiser with 64% of precincts reporting, according to unofficial results.

In a telephone interview late Tuesday, Brady acknowledged he’s “mismatched” when it comes to campaign funding compared to Giannoulias. It’s going to take an “individual candidate that can cross party barriers” to beat a Democrat like the ex-state treasurer in November, he said.

But Brady touted his qualifications to be the next secretary of state by showing that he’s worked with longtime Democratic Secretary of State Jesse White, who is retiring, on various legislation, from organ and tissue donation to distracted driving issues.

“I think the working relationship speaks to itself from the standpoint of what we’ve been able to find common ground with and that is service to the general public, to the people of Illinois, no matter what their political party is,” Brady said of his relationship with White.

Milhiser, a former U.S. attorney from Springfield, conceded the race, another major defeat for the slate of GOP candidates backed by billionaire Ken Griffin, with Aurora Mayor Richard Irvin defeated soundly by state Sen. Darren Bailey in the primary for governor.

White held the secretary of state’s office for six terms, longer than anyone else in state history. White had endorsed Valencia, and earlier Tuesday told her supporters that he “will never regret” his decision to back her, regardless of the race’s outcome.

Giannoulias was only 30 when he was elected in 2006 as the nation’s youngest state treasurer. He had the backing of then-U. S. Sen. Barack Obama, with whom, he frequently mentions, he once played pickup basketball.

But the treasurer’s office was clearly a steppingstone for Giannoulias’ political ambitions. In 2010, when Obama was president, Giannoulias mounted an unsuccessful bid for Obama’s old Senate seat, losing it to Republican U.S. Rep. Mark Kirk.

During that campaign Kirk excoriated Giannoulias for his time as a senior loan officer at his family’s bank, Broadway Bank, which came under scrutiny when it was revealed that the institution had issued questionable loans to crime figures. The bank collapsed in 2010 during the Great Recession.

Since that election, Giannoulias, 46, has stayed out of the political limelight, working in the private sector while sitting on a couple of obscure public boards and various nonprofits. From 2018 until last year, he was on the Chicago Public Library board.

Giannoulias was chair of the Illinois Community College Board from 2011 to 2015, overseeing policies of the state’s two-year colleges. He also invested in a handful of restaurants and took a job as wealth director in the Chicago office of Bank of New York Mellon.

Giannoulias told the Tribune he wouldn’t disclose the identities of his BNY Mellon clients, saying only say that his clients were “individuals and families” and that “none of my clients were elected officials.”

Long viewed as an up-and-comer in Chicago political circles, Valencia, 37, has been city clerk for over five years and has attempted to essentially follow in the footsteps of the woman she replaced, Illinois Comptroller Susana Mendoza, by making the move from clerk to statewide office.

Valencia was endorsed by the highest-ranking Democrats in Illinois, including Pritzker and U.S. Sens. Tammy Duckworth and Dick Durbin, whose reelection campaign Valencia oversaw in 2014.

But the contest between Valencia and Giannoulias focused less on their approaches to modernizing the office, the duties of which include issuing driver’s licenses and overseeing the state’s organ and tissue donation registry, and more on the two highlighting each other’s ethical shortcomings.

Valencia repeatedly attacked Giannoulias for issues that played a major role in his Senate loss: the failure of Broadway Bank and its controversial loans. Giannoulias has raised questions about whether Valencia’s husband’s lobbying practice has interfered with her role as city clerk and whether she built a strong enough wall to separate the personal financial interests of her family from her public duties.

Valencia has admitted she didn’t disclose on city ethics statements that her husband, Reyahd Kazmi, was a lobbyist for clout-heavy Monterrey Security and acknowledged “growing pains,” and that she “made an honest mistake.” Later, her campaign even put out a statement to say Valencia “shut (Kazmi) down any time he’s even come close to crossing a line.”

Flanked by supporters, including both of her parents, Valencia conceded the race shortly after 10:15 p.m.

“Although we did not win this, we already won,” she said. The mood in the room remained jubilant despite the race’s outcome.

During her remarks, Valencia spoke about women across Illinois who hold local elected office. “We have to build a bench to keep coaching them,” she said. Valencia also urged voters to support Giannoulias in the general election in November. “It is critically important Democrats control this office,” she said.

Valencia briefly alluded to the ethics controversies that marked the race, including when thanking her husband. “Politics can get nasty,” she said.

Ald. Moore, 56, stayed out of the Giannoulias and Valencia feuding. Both far outpaced him in campaign funding.

The winner of the Republican race, Brady, 60, is a Bloomington funeral director and one of two deputy GOP leaders in the Illinois House. He’s touted his experience over the years in working on legislation that directly related to the operations of the secretary of state’s office and says he will work to improve the nuts and bolts of an office that connects with citizens more than any other statewide agency.

Milhiser, 52, emphasized his background as a state and federal prosecutor with a goal of restoring people’s faith in government and in an office that he acknowledges has a history of corruption under both parties.

As he left the nearly emptied out Irvin headquarters around 9:45 p.m., Milhiser was asked by reporters what the election results said about the direction of the Republican Party.

In the GOP primary for attorney general, DeVore, a Bailey ally, led with 44% of the vote to 35% for Steve Kim of Deerfield with 66% of precincts reporting, according to unofficial results. Also on the ballot was Orland Park attorney David Shestokas, who had 21%.

DeVore has made his opposition to executive power the cornerstone of his campaign and maintains a relatively unfiltered presence on social media, where he has harsh words for the state’s Republican establishment along with the Democrats who control Springfield.

With all of Griffin’s slated candidates either conceding or trailing as the races were poised to be called, DeVore said the message was clear: “People in the state are looking for someone who actually cares about them, not traditional politicians.”

“I mean no disrespect, but those candidates weren’t out there the last two years fighting for people who were dealing with the excessive overreach of the governor, wielding authority he didn’t have,” DeVore said. “I’m humbled by the fact that people voted for me, and the reason they did is they know I’m not running to be a politician, but because I want to help people.”

Kim, 51, was making his second bid to be the state’s top legal officer and his third run for statewide office.

Kim got a last-minute endorsement Monday from his onetime boss, former GOP Gov. Jim Edgar, who represents the moderate wing of the party that has been losing ground to conservatives.

Kim is a partner in a boutique international law firm based in Chicago and a former international trade adviser to Edgar, who made his endorsement public in an automated phone message on the eve of he primary. Kim has little name recognition outside political circles after two failed bids for statewide office, including a 33-point loss to Democratic incumbent Lisa Madigan in the 2010 general election for attorney general.

Kim ran a low-key campaign, joining members of the Irvin-led slate in small meet-and-greets around the state. He made crime and corruption his top issues, like many other GOP candidates on the ballot this year.

Unopposed on the Democratic ballot were Mendoza, the state comptroller from Chicago, and state Treasurer Michael Frerichs of Champaign.

In the Nov. 8 general election, Mendoza will face McHenry County Auditor Shannon Teresi, while Frerichs will face state Rep. Tom Demmer of Dixon. The two Republican challengers ran on the Irvin slate and were unopposed in their primaries.