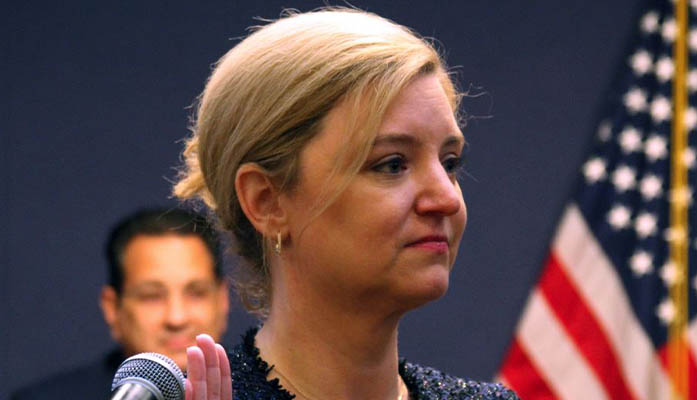 Former Maricopa County Attorney Allister Adel died Saturday due to health complications, according to a statement released in the name of her husband.

“My family and I are utterly heartbroken by this unimaginable loss. We are so very proud to call Allister wife and mom,” said Adel’s husband, David DeNitto. “We are asking that the press and the public honor her, her legacy, and our family by respecting our privacy at this difficult time.”

Adel was appointed as Maricopa County Attorney by the county’s board of supervisors in October 2019 after Bill Montgomery was named to the Arizona Supreme Court. A Republican, she was the first woman to hold the position, coming into office with vast experience including at the Maricopa County Superior Court, the Maricopa County Bar Association, and as a hearing judge for the Arizona Department of Transportation.

I was sad to hear of @AllisterAdel ‘s passing today. I met Allister and David in 2009. Allister and I have a shared passion in fighting human trafficking. She loved her family very much. My prayers go out to David, Mason and Spencer. 💓🙏🏻 pic.twitter.com/W2TqarFseF

Truly shocking to hear about the death of former Maricopa County Attorney Allister Adel. My heart goes out to her husband and children during this difficult time.

As the county attorney, Adel’s duties included overseeing more than 1000 employees while serving as legal advisor and counsel for all Maricopa County departments, including the board of supervisors. She was later elected to the office in the 2020 General Election by just one percent out of nearly 1.9 million votes.

On election night, Adel was in the hospital having surgery for a blood clot on her brain stemming from a fall during which she had hit her head. The injury left Adel in the hospital for several weeks before she was discharged to continue her recuperation at home well into 2021.

Then in September 2021, Adel publicly acknowledged she had been admitted weeks earlier to at least one rehabilitation facility to help address an eating disorder and to maintain her sobriety. Information about that and prior absences had not been previously shared with the county board, it was revealed.

Over the next few months the fallout from Adel’s frequent absences from the office became the subject of whether Adel’s alcoholism and her need for treatment had interfered with her ability to properly advise county clients, supervise the third largest non-federal prosecutorial staff in the country, and manage the agency’s $115 million budget. And whether it continued to interfere.

The controversy swelled after questions were raised about what involvement Adel had in planning Maricopa County’s legal strategy to several lawsuits filed in connection with the 2020 General Election.  Numerous county employees and officials named in those lawsuits or who were involved in responding to the claims have indicated they were never sure if Adel actually knew what was happening in those cases.

Then in February, Adel’s top criminal division chiefs wrote to their boss asking her to resign in the midst of pending claims of more than $100 million for false prosecutions which could result in the largest such payout in state history. The motivation and timing of the chiefs’ request has come under question given that the letter was copied to the Board of Supervisors and the State Bar of Arizona before Adel had a chance to respond.

Adel eventually resigned as Maricopa County Attorney effective March 25. She ignored the recent controversies, focusing in a press statement on the accomplishments during her tenure, “including policies that seek justice in a fair and equitable manner, hold violent offenders accountable, protect the rights of crime victims, and keep families safe.”

One of the last things Adel did as county attorney was approve release of the agency’s 2021 Annual Report, which highlighted the success of the agency’s

It was later reported Adel was receiving medical care at the time of her resignation. She had also met with State Bar of Arizona officials the week before.

In the statement announcing Adel’s death, her husband noted the couple would have celebrated their 20th wedding anniversary in May. Adel is also survived by two children.  Many who knew Adel took to Twitter to express their sympathies, including former Arizona Supreme Court Justice Andrew Gould, former Gov. Jan Brewer, and Maricopa County Sheriff Paul Penzone.

I’m shocked and devastated to learn that my friend, Allister Adel, passed away earlier today. My heart is broken for her husband and two young children that she leaves behind. Please join me in praying for the family as they grieve during this difficult time.
RIP Allister. 💔 pic.twitter.com/TDcbZJ5ZFF

Veronica and I are deeply saddened by the tragic passing of Allister Adel. We are holding her children, her family and her friends in our prayers. May she Rest In Peace.