Football Has Long Been the Third Rail for College Leaders. It’s Even More Perilous Now. 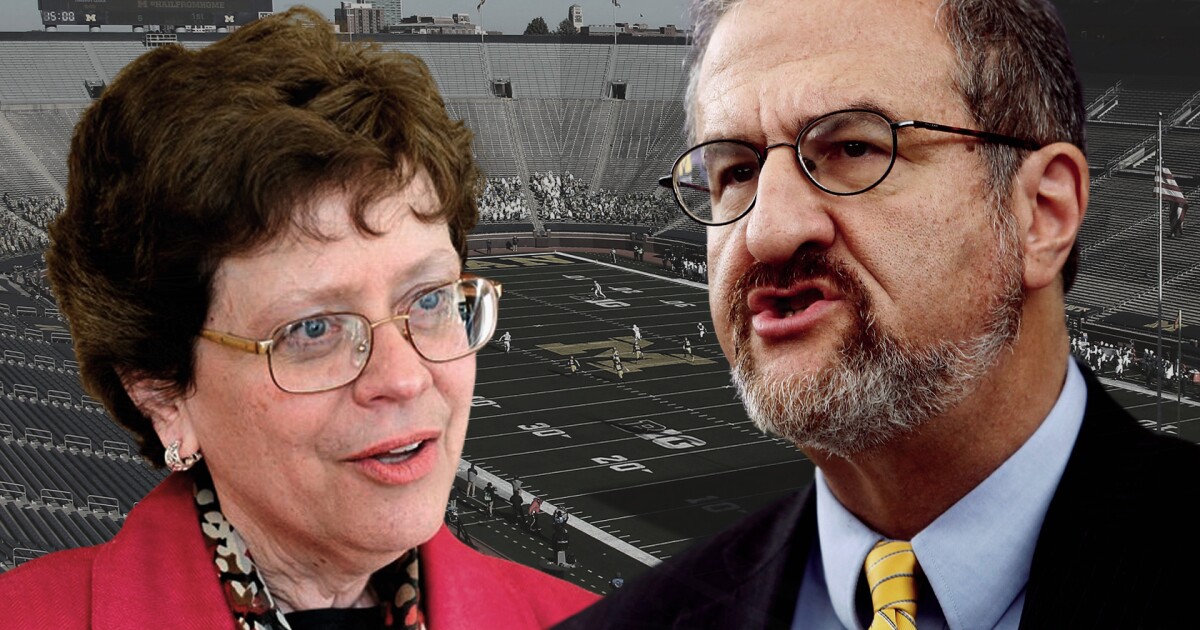 Whatever their intention, the message from college leaders in the Big Ten athletic conference was clear: Please leave the room, kids; Mom and Dad are talking football.

In sensitive deliberations this past fall about whether to mount a football season in the middle of a pandemic, the top academic officials in one of the nation’s premiere athletic leagues discussed moving their email discussions onto a secure conference portal that the chancellors and presidents viewed as exempt from public-records laws, The Washington Post reported on Friday.

“I would be delighted to share information,” Rebecca M. Blank, chancellor of the University of Wisconsin at Madison, wrote in an email in August to Mark S. Schlissel, president of the University of Michigan at Ann Arbor, “but perhaps we can do this through the Big 10 portal, which will assure confidentiality?”

When government officials talk about the ability to have candid discussions behind closed doors, what they’re really talking about is a right to lie.

The desire for secrecy speaks to the acute sensitivity of deliberations in the Big Ten, which had decided in August to scrap football, only to reverse course in September after other elite leagues charged ahead and then-President Donald J. Trump pressured the conference to resume. (The Pac-12 had a similar reversal).

Pandemic politics aside, the Big Ten leaders’ preference for privacy highlights the combustible nature of football controversies in the nation’s so-called Power 5 conferences. At these institutions, which represent only a sliver of higher education, a college president’s offhand remark or an internet rumor can spawn a national news cycle, eclipsing just about everything else that the university does.

“You’re not going to get fired if the English Department doesn’t produce another book this year,” says Harvey S. Perlman, a law professor and former chancellor at the University of Nebraska at Lincoln, a member of the Big Ten conference. “But you are going to get fired if you don’t have a winning football team.”

The fans are fervent. The decisions are morally complex. The money can be astronomical. Covid-19 has only heightened the stakes, forcing college leaders to wrestle with whether college football’s outsize importance within their institutions is so essential to the enterprise as to be worthy — alongside classroom instruction — of pandemic preservation. For the Power 5, the answer was yes. But much of the debate over whether to proceed, to the extent it took place, happened out of public view.

Playing football in the pandemic was among the most fraught issues facing college leaders this year, and the Post’s reporting raises questions about whether academic leaders were so worried about the optics of their discussions that they considered subverting the spirit, if not the letter, of public-records laws.

When Wisconsin’s chancellor mentioned confidentiality, Schlissel, of Michigan, wrote to colleagues that he was “working with Big Ten staff to move the conversation” to the conference’s secure site, the Post reported.

In an exchange with Blank, Schlissel wrote, “Becky, if you simply delete emails after sending, does that relieve you of FOIA obligations?” referencing the Freedom of Information Act. “I share your concern of course.”

In a statement provided to The Chronicle, a Michigan spokesman said, “President Schlissel takes seriously his obligation under the Michigan Freedom of Information Act and regularly provides email messages and other documents as required by law.”

“In this case,” the statement said, “President Schlissel was discussing with fellow presidents the status of the pandemic on those campuses and ideas about how to navigate the novel, shared challenge — Covid-19. While the suggestion was made, this conversation was not moved to the Big Ten portal.”

It is unclear whether any other conversations may have taken place on the portal. The Post filed public-records requests with several institutions for communications housed on the platform, and those requests were denied, according to the newspaper.

As for whether Schlissel deletes emails, the spokesman wrote, “U-M does not have a requirement to retain email for any specific period of time.”

Contacted by The Chronicle, Wisconsin officials provided the same statement the university had provided to the Post. “Chancellor Rebecca Blank communicates with her fellow Big Ten presidents and chancellors in multiple ways, but is mindful of her responsibilities under Wisconsin’s public records laws.”

Blank and Schlissel declined interview requests, as did Ronnie D. Green, Nebraska’s chancellor, who was also mentioned in the Post’s report.

“Chancellor Green is very mindful of and respects the intent of Nebraska’s public-records laws,” a Nebraska spokeswoman wrote in an email to The Chronicle. “Any communication with his fellow Big Ten presidents and chancellors is consistent with Nebraska’s requirements.”

The Big 10 deliberations are significant, as they suggest an undercurrent of concern about how frank talk on the subject of pandemic-era football might appear in the public eye. Caution and even secrecy, though, are nothing new when it comes to college leaders and football.

If college leaders seem paranoid about being watched, it may be because they are literally being watched. When the University of Florida was looking for a new football coach, in 2004, J. Bernard Machen recalls arriving at the university airport to find a reporter from The Orlando Sentinel camped out to see where he was going.

For Machen, Gator football presented an almost immediate trial by fire. Florida dismissed Ron Zook, the head coach, during Machen’s first year on the job, and just as swiftly the fan base was convinced he would blow the next hire. A website, fireberniemachen.com, sprang up “within one day,” Machen recalls, and fans heckled the president when he rode his Harley-Davidson motorcycle in a homecoming parade.

“Why don’t they wait until I do something before they offer to fire me?” Machen remembers thinking.

As it turned out, Florida soon hired Urban Meyer, who led the Gators to two national championships.

Presidents of universities with high-profile football programs expect scrutiny, but they may diverge from the public — and journalists — about when that scrutiny is appropriately applied. As the Big Ten deliberations illustrate, a lot of college presidents would rather defend a consensus decision than talk about the messiness that led to it.

Machen, who did not want to comment directly on the Big Ten case, says there should be space for college leaders to have private deliberations as long as they happen in accordance with the law.

“There has to be some contemplative time here,” Machen says.

Regardless of the legal implications, the Big Ten exchanges appear to reflect a mind-set that troubles transparency advocates. Frank D. LoMonte, director of the Brechner Center for Freedom of Information at the University of Florida’s college of journalism, says the closed-door discussions about playing football in the pandemic reflect a “much larger cultural problem throughout higher education.” The deliberative process, LoMonte said in an email, may help the public understand the motives behind the decision, which is an important piece of public accountability.

“If the presidents are talking privately about how they don’t think it’s safe to play football, but they need to reopen the stadiums to appease their legislators or appease their big donors, then we need to know that politics and money overrode public health,” LoMonte wrote. “When government officials talk about the ability to have candid discussions behind closed doors, what they’re really talking about is a right to lie. They’re saying that they want the ability to share their true motives in private, and then come out publicly and assure people that the decision was made for only the most noble reasons, based on nothing but expert medical advice.”

There’s a telling joke about the Atlantic Coast Conference, whose members were so nervous in recent years about putting anything in writing that people said ACC actually stood for “Another Conference Call.”

During his tenure as chancellor of the University of North Carolina at Chapel HIll, which is a member of the ACC, H. Holden Thorp hosted a number of such calls. Thorp, whose time as chancellor was stymied by athletics controversies, says he empathizes with college leaders who fear every utterance about athletics could create a firestorm.

“They don’t want their lives to get taken over by whatever they have to say about this,” Thorp says.

College football isn’t a hot potato just because of the money, although that’s a big factor for the highest-profile programs. Few other facets of the university generate such significant tension between the stated goal of the academic enterprise — educating students and creating knowledge — and the beloved entertainments and traditions colleges can also provide.

Increasingly, college football is seen through the lens of a national reckoning around race in the United States. Presidents are under pressure to prove that their decisions about football reflect their stated values on diversity and equity. On Tuesday, the University of Texas at Austin released a report on “The Eyes of Texas,” a school song that football players had protested as racist, prompting a backlash from some alumni who threatened to withhold donations in response to the activism. The report found that the song had “no racist intent,” but Jay Hartzell, the president, said athletes and band members will not be required to sing or participate when the song is played at games and campus events.

The pandemic has for some crystallized concerns about colleges’ making money off uncompensated football players, many of them Black, even in the face of a public-health risk. These are the sorts of hot-button issues that college presidents, many of whom have in the past year issued public statements against police brutality and racial injustice, would rather not discuss on the public record, according to Eddie R. Cole, an associate professor of higher education and organizational change at the University of California at Los Angeles.

The Big Ten’s apparent desire for secrecy, Cole says, “only confirmed my suspicion that concerns around optics and race and football were very much on the forefront of these college presidents’ minds as they made the decision to proceed with college football.”

“Once again, as we saw in previous decades, university leaders leaned on profit and the well-being of the institution before leaning on the well-being of Black students,” says Cole, author of The Campus Color Line: College Presidents and the Struggle for Black Freedom. “That’s really what I see here, regardless of whether they should or shouldn’t have gone to the private portal. What they’ve done is continued a historical tradition.”

The Learning and Employment Record | Inside Higher Ed

U of Tennessee Flip-Flops (Again) on Vaccine, Mask Mandates | Inside Higher Ed