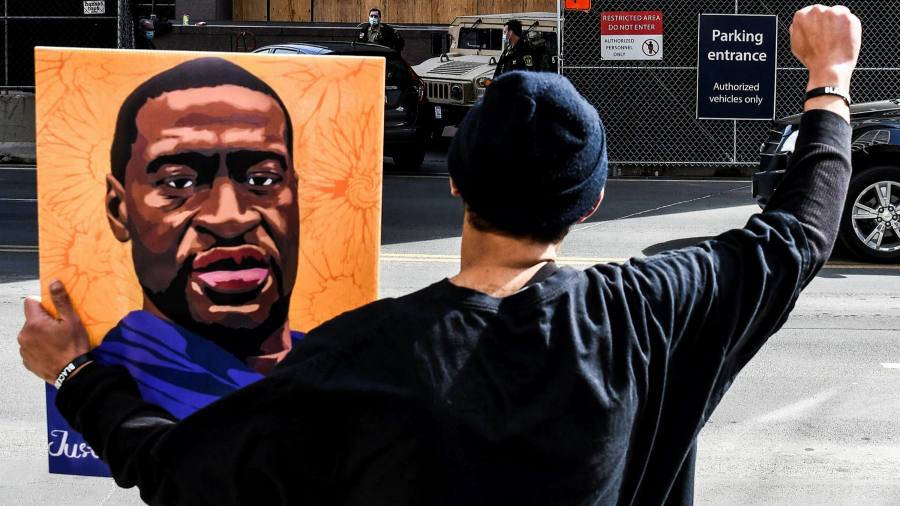 When questioned by the lawyer defending Derek Chauvin, prospective juror 39 said footage of George Floyd’s death, for which the former Minneapolis police officer is standing trial, had reminded him “of a war scene.”

On the video, which triggered unprecedented global protests last year, the police officers, who are seen holding Floyd face down on the ground while he was crying out for his mother, behaved “like an occupying force”, he added.

“You have very strong opinions,” said the lawyer representing Chauvin, who has pleaded not guilty to charges of murder and manslaughter. “Can you basically clear your brain of that? A clean slate?”

The prospective juror insisted he could — “If I couldn’t imagine myself saying, ‘not guilty’, I wouldn’t be here” — but was ultimately blocked from serving on the jury.

It’s not just our duty to fight, it’s our duty to win, and that’s what we’re going to do.

This scene underlined one of the many challenges of the high-profile trial, which started this week in Minneapolis with the delicate process of jury selection. Lawyers quizzed dozens of prospects to find a group of 12 jurors and four alternates able to set aside their opinions about Floyd’s on-camera killing and the subsequent protests — and commit to making an impartial decision in a case that has rocked the world.

Jury selection is expected to take several weeks, longer than a typical criminal trial but hardly unusual for a case that received global media coverage and left an indelible mark on the city in the upper Midwest where it is being tried. Potential jury members, whose names were withheld, were asked to complete an unusually lengthy 14-page questionnaire covering their attitudes toward policing and the Black Lives Matter movement.

They were then summoned for further grilling at the courthouse in downtown Minneapolis — located just three miles north of 38th and Chicago Avenue, an area now known as George Floyd Square — which had been barricaded with fencing topped with concertina wire.

The trial, which is expected to get under way in earnest with opening statements later this month, is seen as a wider referendum on whether officers can be held accountable for misconduct — especially when the victim is black, as Floyd was.

It is rare for officers to be charged with murder or manslaughter when they kill someone on duty, making the Chauvin case the most high-profile police trial in years. While officers are involved in the killing of about 1,000 people a year, a database maintained by a Bowling Green State University professor shows that only 200 were charged with murder or manslaughter between 2005 and 2015.

Floyd’s killing sparked civil unrest, with widespread peaceful protests accompanied by some looting and burning in Minneapolis and other US cities. Protesters marched through the streets throughout the summer of 2020 demanding an end to racial injustice.

Despite the public displays of outrage at the number of deaths while in police custody, civil rights activists have been disappointed by the frequent lack of serious legal consequences, like when only one of the three Kentucky police officers involved in the fatal shooting of Breonna Taylor, a black woman, was charged with a crime.

Keith Ellison, the Minnesota attorney-general who has led the Chauvin prosecution, has cautioned that obtaining a conviction will be difficult, despite footage from this summer that showed Chauvin kneeling on Floyd’s neck for nearly nine minutes after a 911 caller told police Floyd had used a counterfeit $20 bill at a convenience store.

Chauvin has pleaded not guilty to the charges against him, which include second- and third-degree murder and manslaughter.

Whether what Chauvin did was a crime will be at the heart of what jurors are asked to decide. A recent poll from USA Today/IPSOS showed a stark divide between black and white Americans in answering that question.

According to that poll, 64 per cent of black Americans viewed Floyd’s death as murder, compared to just 28 per cent of whites. More white than black respondents described Chauvin’s actions as negligence, but a majority of those familiar with the case said they hoped for a conviction.

Of the jurors selected so far for the Chauvin case, one is black, one Latino, one multiracial and three are white.

Compared with the demonstrations that roiled cities across the country this summer, protests and demonstrations during jury selection so far have been relatively low key. City officials are preparing for that to change as proceedings move closer to a verdict.

The city also announced on Friday that it had settled a civil lawsuit brought by the Floyd family for $27m, one of the highest settlements of its kind on record.