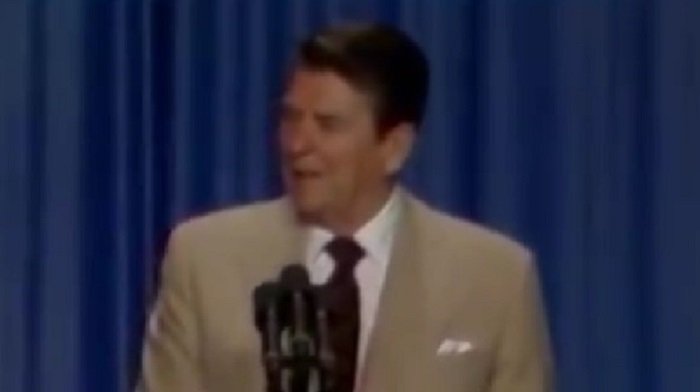 President Ronald Reagan’s speech to the Annual Members Banquet of the National Rifle Association (NRA) in 1983 provided a “nasty truth” that could easily be applied to today’s anti-gun Democrats.

Reagan told the crowd in attendance why gun control legislation doesn’t work and referenced his own assassination attempt by John Hinckley Jr. as evidence.

He delivered a simple, yet effective line.

“It’s a nasty truth, but those who seek to inflict harm are not fazed by gun control laws,” Reagan said. “I happen to know this from personal experience.”

Hinckley, who won unconditional release scheduled for June 15th, brought a gun he bought in Dallas, Texas to Washington, D.C., something this 1981 United Press International column describes as illegal.

President Reagan had a strong message on Gun Control in a speech to the @NRA – Take a look: pic.twitter.com/pdm3OaRt9Z

RELATED: Joe Rogan Knocks Down Gun Control, Weapon Bans: ‘Only Criminals Will Have Them’

Reagan’s Speech to the NRA

Reagan’s speech to the NRA was newsworthy as, according to the Washington Post, “a ringing denunciation of gun control laws” just over two years removed from being shot himself.

The iconic Republican president went on to explain that criminal control is a better means to reduce violence than gun control.

“We’ve both heard the charge that supporting gun-owners rights encourages a violent, shoot-em-up society,” he explained. “But just a minute. Don’t they understand that most violent crimes are not committed by decent, law-abiding citizens?”

How relevant is that in a day and age when liberal DAs and politicians encourage having criminals released and roaming the streets without incarceration for their crimes?

What President Ronald Reagan said in a 1983 speech to the NRA is still true today.

Here’s why stricter gun laws do not reduce gun violence.https://t.co/CbzjuJ0osV

Criminals Are Thrilled By Gun Control

In his speech to the NRA in 1983, Reagan also told a story about a letter he allegedly received from a “convicted burglar serving time in San
Quentin Prison.”

The career criminal, as the story goes, was only thwarted by one thing when preparing to strike a home.

“‘We can case a place, a home. We can watch and learn the habits of the people that live there when they’re in and out and all of that. But,”’ he said, “‘the one thing that always sticks in our mind that we can never answer is – Is that one of those homes where the fellow has a gun in a drawer by the bed?’”

“‘That’s the one that scares us most of all,’” the letter read according to Reagan.

Joe Rogan opposes gun control: ‘Only criminals are gonna have them’ https://t.co/dBvPiuQilQ pic.twitter.com/bYJE8s9IjC

“Is the answer to take everyone’s guns?” he asked adding, “Only criminals are gonna have guns. It’s not gonna be a good situation.”

Freedoms, Reagan said in his speech, should not be a right or left issue.

“When it comes to keeping America free, there should be no Republicans or Democrats, only patriotic Americans working together,” he told the crowd.