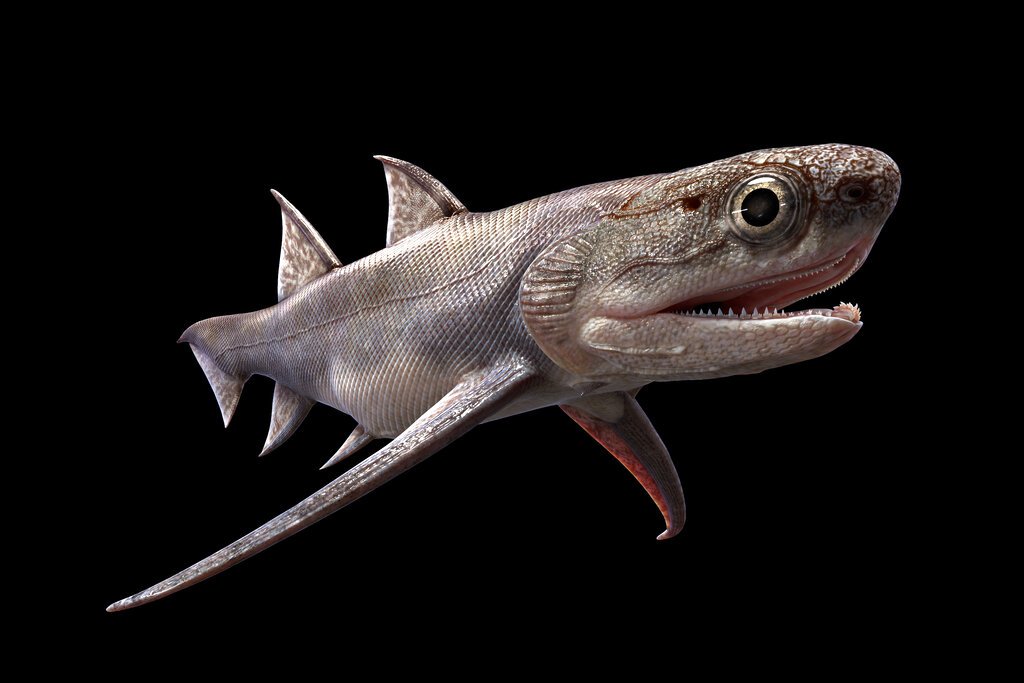 This illustration provided by Heming Zhang in September 2022 depicts Qianodus duplicis, one of the fossil fish, more than 400 million years old, which were found by researchers in southern China, announced in a series of studies published in the journal Nature on Wednesday, Sept. 28, 2022.

NEW YORK — A big catch of fish fossils in southern China includes the oldest teeth ever found — and may help scientists learn how our aquatic ancestors got their bite.

The finds offer new clues about a key period of evolution that’s been hard to flesh out because until now scientists haven’t found many fossils from that era. In a series of four studies, published Wednesday in the journal Nature, researchers detail some of their finds, from ancient teeth to never-before-seen species.

The fossils date back to the Silurian period, an important era for life on earth from 443 million years ago to 419 million years ago. Scientists believe our backboned ancestors, who were still swimming around on a watery planet, may have started evolving teeth and jaws around this time.

This let the fish hunt for prey instead of “grubbing around” as bottom feeders, filtering out food from the muck. It also sparked a series of other changes in their anatomy, including different kinds of fins, said Philip Donoghue, a University of Bristol paleontologist and an author on one of the studies.

“It’s just at this interface between the Old World and the New World,” Donoghue said.

But in the past, scientists haven’t found many fossils to show this shift, said Matt Friedman, a University of Michigan paleontologist who was not involved in the research. They’ve been relying on fragments from the time — a chunk of spine here, a bit of scale there.

The fossils from China are expected to fill in some of those gaps as researchers around the world pore over them.

A field team discovered the fossil trove in 2019, Min Zhu, a paleontologist at the Chinese Academy of Sciences who led the research, said in an email. On a rainy day, after a frustrating trip that hadn’t revealed any fossils, researchers explored a pile of rocks near a roadside cliff. When they split one rock open, they found fossilized fish heads looking back at them.

After hauling more rocks back to the lab for examination, the research team wound up with a huge range of fossils that were in great condition for their age.

The most common species in the bunch is a little boomerang-shaped fish that likely used its jaws to scoop up worms, said Per Erik Ahlberg of Sweden’s Uppsala University, an author on one of the studies.

Another fossil shows a sharklike creature with bony armor on its front — an unusual combination. A well-preserved jawless fish offers clues to how ancient fins evolved into arms and legs. While fossil heads for these fish are commonly found, this fossil included the whole body, Donoghue said.

And then there are the teeth. The researchers found bones called tooth whorls with multiple teeth growing on them. The fossils are 14 million years older than any other teeth found from any species — and provide the earliest solid evidence of jaws to date, Zhu said.

Alice Clement, an evolutionary biologist at Australia’s Flinders University who was not involved with the research, said the fossil find is “remarkable” and could rewrite our understanding of this period.

The wide range of fossils suggests there were plenty of toothy creatures swimming around at this time, Clement said in an email, even though it’s the next evolutionary era that is considered the “Age of Fishes.”