First the U. of Vermont Announced Cuts. Then Enrollment Spiked. Now What? 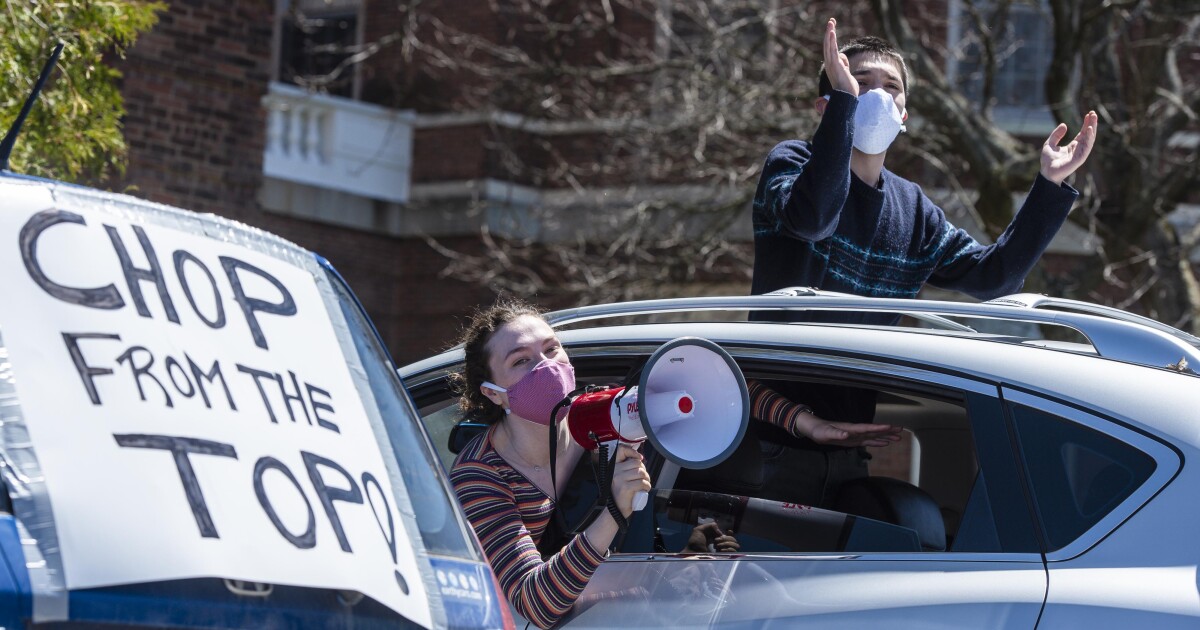 The University of Vermont announced cuts in December in its College of Arts and Sciences, arguing that a structural budget deficit exacerbated by the pandemic made it necessary to eliminate programs. But the college is now grappling with a new problem: A surge of incoming freshmen committing to the university has left the college understaffed.

After factoring in likely melt among committed students, administrators anticipate that more than 1,425 freshmen will come to campus, “well above the 1,250 that we built the fall schedule for,” the college’s dean, Bill Falls, wrote in an email to the staff. The university expected around 1,300 deposits by May 1 but received 1,640, a “significant jump,” he told faculty members in the college at a Tuesday meeting.

Now, the college is clamoring to find professors to teach first-year seminars and large-enrollment courses for this wave of new students. College leaders have reached out to three lecturers who were not reappointed in December to ask them to teach and have asked full-time faculty to take on additional work.

“I haven’t yet gone out to the corner and just flagged down cars to see if they can teach, I don’t know, psychological science,” said Abigail McGowan, the associate dean of the college, at a virtual faculty meeting on Tuesday that was recorded on Microsoft Teams. (The Chronicle obtained audio from the meeting.) “We’re all exhausted, we’re overwhelmed, we’re tired. This is a bad year to come back to people” and say, “do you want to do extra work next year?”

On approaching the lecturers whose contracts were not renewed, McGowan acknowledged the difficulty of the request. “I don’t know what I would say if someone asked me in this situation. I might tell you to get lost,” she said on the call.

The pandemic has meant immense uncertainty for college budgets. Few university leaders knew how many students would enroll, if they could live on campus, or whether they would want to take classes online. Early projections of financial losses appeared grim, and campus leaders nationwide had to make difficult decisions without much precedent to guide them.

But many universities fared better than anticipated, and Vermont’s new scramble shows the risk of cutting too quickly. The December proposal — which was to eliminate 12 majors, 11 minors, and four master’s programs — in the college has not been finalized. The proposal called for the consolidation of departments in arts and languages and the elimination of three others: classics, religion, and geology. Professors at the college for months have raised questions about the structure of the university’s budget, a responsibility-center management program. They held a teach-in on campus finances and have argued that the proposed consolidations — or even simply the three lecturers’ salaries — could have been covered by reserves.

Professors had been told such an idea was “impractical” or “imprudent,” David Feurzeig, a professor of music theory and composition, said at the meeting.

“In retrospect,” he said, “it seems highly imprudent to cause the human disruption and the bad PR and the massive community outlash, not committing those funds when they could have done exactly what we’re suggesting, which is to smooth things over until we see the big picture.”

Operating with thin margins, he said, was “a management choice,” because the university has reserves. “We’re seeing the very real-world folly” of declining to use reserves to smooth deficits.

In an interview, Feurzeig quickly ticked off statistics on Vermont’s finances — including the amount of Covid-19-relief money that the university received from the U.S. government, and the anticipated savings from the proposed program consolidations. “I’m a musician,” he said. “I’m good at numbers — music and math go together — but I didn’t care about the budget so much until they started to make it necessary to care about the budget.”

He called the proposed program eliminations “shoot-from-the-hip, unilateral” announcements that weren’t made with proper consultation with the faculty.

McGowan said at the meeting that she did not think Vermont could have made a different decision in December “because of how bleak things looked.” And administrators said the cuts remain necessary.

If the College of Arts and Sciences had consistently brought in far more revenue than expenses, Falls said, it would have been easier to manage a volatile year. But the college has lost roughly 1,000 students since 2010. While the projected enrollment increase in the fall is good news, the dean said, the momentum needs to continue.

“Let’s hope and pray we’re talking about this again next fall,” he said. He argued in an email to the faculty that the bigger-picture consolidations are necessary for the college’s future, but said he hoped the larger class of students could allow for future investment.

Falls did not respond to requests for interviews this week, and McGowan referred The Chronicle to Falls.

Areas of possible enrollment growth are not in programs that the college previously identified for consolidation, Enrique Corredera, a spokesman for the university, wrote in an email to The Chronicle. And even if enrollment increases, he wrote, “reductions in overall expenses for the College are still necessary.”

He wrote that the higher enrollment in the college is an issue that “should not be conflated” with the review of low-enrollment programs.

The clash in Vermont is the latest in which research-university staff and faculty members are pushing back against their administrators’ pandemic decisions to cut nontenured professors, restructure departments, or eliminate benefits like retirement contributions.

The crisis and its accompanying dire predictions of university closure motivated some college leaders to make decisions quickly, without faculty consultation, said Willis Jones, an associate professor of higher education at the University of South Florida.

But that raises concerns among professors about their administrators’ priorities. “Increasingly, faculty are becoming more suspicious of the blanket statement of, ‘We are losing money, and we need to do something about it,’” he said.

Some campuses have weathered the storm better than anticipated, casting some doubt on the enacted austerity policies.

Professors at the Johns Hopkins University, for example, crowdfunded $5,000 for a forensic audit of university finances last year, which showed a $75-million surplus, not the expected $51-million loss, as well as almost $2 billion in reserves, one professor wrote in The Chronicle. Previously, administrators had suspended retirement contributions and froze salaries, among other steps. After the results of the audit were publicized, the university’s president restituted benefits and resumed merit-pay increases.

In Vermont, much remains unknown. College leaders on Tuesday said retention rates for rising sophomores could be lower than anticipated after a challenging first year in college, possibly offsetting the projected growth in the new freshmen class. Students could also have put down deposits to multiple universities, which would result in higher-than-expected melt rates.

“We are not planning seats at this moment for all 1,640 new students, partly because I think I actually would have a heart attack if I had to do that,” McGowan said. “But second of all, because I don’t think those students will materialize.”

The six-year average for melt within the college is 8.2 percent, Falls said on the call. If that were to occur this year, the college would still be well above its expected first-year class size. If the college cannot offer courses to accommodate the additional students, melt is more likely, Falls said.

There’s also the question of why the college experienced increased interest this year.

On Tuesday, Falls floated various possible reasons. There were many more applications, which he attributed to test-optional policies. About one-third of additional deposits came from students who deferred their admission from last fall. The state was prominently placed in national news, too, with Sen. Bernie Sanders’s run for president and the state’s handling of the pandemic. Vermont has had minuscule infection numbers compared to many other states. It is unclear whether this interest would be sustained in future years.