‘Finally, I can go home’: Ohio mother targeted by ICE leaves sanctuary for the first time in years 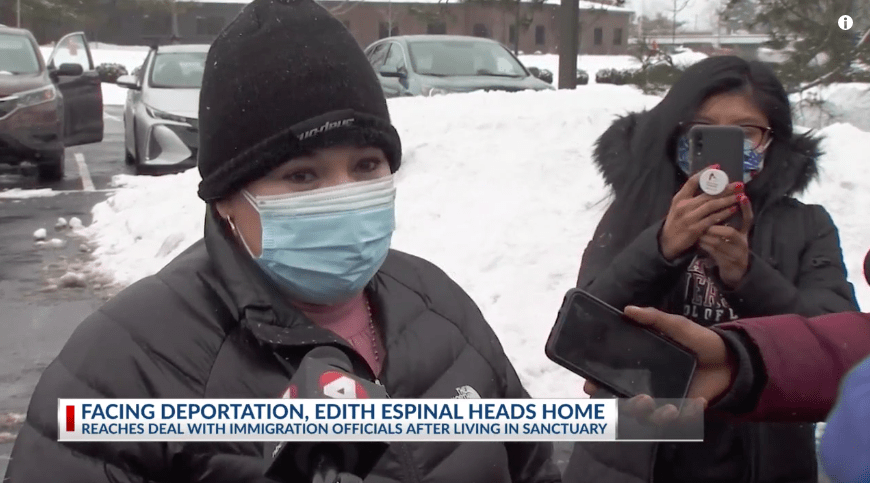 While Espinal is still under a deportation order, her attorney Lizbeth Mateo told the Dispatch that she was able to leave the church and go home under an order of supervision. Espinal will also need to periodically check in with ICE, as she had already been doing before she went into sanctuary, and did again for the first time in years on Thursday. “She left the office about an hour after the meeting began to cheers and claps from supporters waiting for her,” the report said. Dozens were anxiously waiting for her to leave the building. Thankfully, she did. “Finally, I can go home,” she said in the report.

Edith Espinal walks into the ICE office for a hearing in hopes that she will be able to leave the church where she has lived for nearly 3 1/2 years pic.twitter.com/Je8g0Q92wq

Advocates said Espinal’s ability to be able to return home is a result of President Joe Biden’s new enforcement priorities. “The Biden administration has announced a series of immigration executive orders, including one that sets new guidance about who is considered a priority for removal,” they said. “Under these new guidelines, Edith should not be considered a priority for removal and should be granted a reprieve from deportation.”

Other immigrants in sanctuary have also recently been able to go home under the new administration. Earlier this month, 65-year-old asylum-seeker Saheeda Nadeem was able to leave First Congregational Church in Kalamazoo, Michigan, where she’d been in sanctuary for nearly three years. Not only was the threat of deportation against her dropped—meaning she could now safely leave sanctuary after three years—but her visa application would also be getting expedited.

Espinal’s situation remains much more precarious. “If priorities change, she could be picked up and deported,” Mateo told the Dispatch. “We still have to be on the lookout to make sure she stays.” Espinal needs the “big, bold and inclusive” immigration overhaul recently introduced by the Biden administration and Congressional Democrats. What Espinal and Nadeem’s cases also show is that ICE is perfectly capable of deciding to not prioritize someone for deportation. It’s made decisions to not deport Espinal and Nadeem, yet is still ruthlessly and despicably targeting Black immigrants, including children, for deportation.

“Many of these members of our communities are reportedly coerced and abused in for-profit detention facilities,” Congressional Black Caucus members recently pleaded to Department of Homeland Security Secretary Alejandro Mayorkas, “such as the Winn Correctional Center in Winnfield, Louisiana, then abruptly flown by ICE Air chartered aircraft to countries where they cannot safely return (e.g. Cameroon, Ethiopia, and Haiti), even while their legal challenges to their removals are pending.”

ICE can decide to stop those deportations as well, just as easily as it decided to not deport Espinal and Nadeem. Indeed, just like when she shared her story with Castro several years ago, Espinal said she hoped her story can help others. “I hope this can open doors for other people living in sanctuary,” she said in the Dispatch. “We’re going to continue pressing the Biden administration to do the right thing, and try to get rid of that order of deportation against Edith, so she can walk freely like everyone else does without fear,” Mateo told NBC News.

#breaking after 3 1/2 years of waiting Edith Espinal was allowed to leave the Clintonville church where she has called home and head to her home in Columbus. Edith sought sanctuary in the church to avoid deportation to Mexico. She had a hearing before ICE this morning. #10tv pic.twitter.com/7Lq6kAduZi

Joel Miller, pastor of the Columbus Mennonite Church, told Religion News Service that the church would continue remaining a place of sanctuary and protection for undocumented immigrants under threat of deportation by ICE, which remains a dangerous agency. Congressional leaders have in fact said firings at the agency are long overdue. “It’s become a really important part of our identity as a congregation,” Miller said. “Sanctuary is something we’ve come to see as a core part of our mission. It’s something we deeply believe in.”

What Square’s acquisition of Afterpay means for startups – TechCrunch