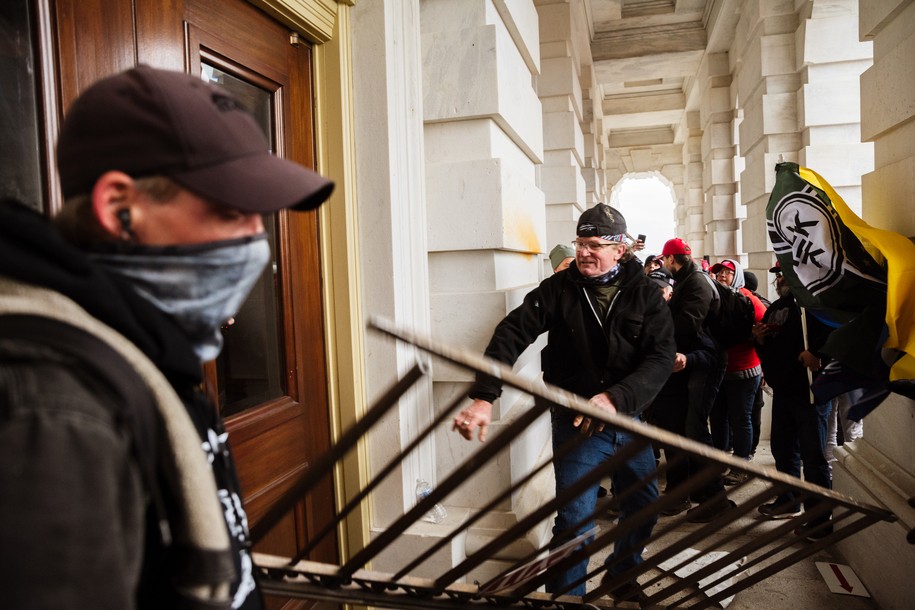 In the indictment, filed on Thursday, Riley was on active duty in the K-9 unit, and while he was not in the Capitol building on Jan. 6, he did respond to reports of an explosive device near the Capitol grounds. The obstruction comes after a new Facebook friendship Riley had begun with someone—identified as “Person 1”—posted “’selfie’-style photographs, videos, and other commentary on Facebook admitting his presence and conduct inside the U.S. Capitol on Jan. 6, 2021.”

According to court documents, Riley became friends with Person 1 on Jan. 1, though the two individuals “did not know each other.” It seems they were both connected through “fishing-related Facebook groups.” Anyhow, On Jan. 7, Riley reached out in a direct message to Person 1, writing, “Hey [Person I], im [sic] a capitol police officer who agrees with your political stance. Take down the part about being in the building they are currently investigating and everyone who was in the building is going to charged. Just looking out!”

Sounds like one of these good cops we always hear about. The indictment details a series of messages between the new Facebook buddies. After receiving a few more videos, apparently shot during the insurrection, officer Riley calls the day’s events a “shit show” and acknowledges that “[w]e had over 50 officers hurt, some pretty bad.”

Person 1 does plead his innocence, to which Riley gives his expert legal advice: “The only thing I can see is if you went in the building and they have proof you will be charged. You could always articulate that you had nowhere to go, but thats for court.”

Now, let’s pay attention to dates and exchanges. The officer and the insurrectionist continue to talk about fishing and the Jan. 6, Capitol event. Then on Jan. 9, 2021:

Person 2 messaged RILEY about Person 1. In particular, Person 2 sent RILEY a video of Person 1’s Facebook live-stream from the U.S. Capitol on January 6, which showed Person 1 smoking an unknown substance inside the Capitol building. Person 2 also sent RILEY a screenshot of the video, capturing Person 1 inhaling from a hand-rolled cigarette. RILEY responded to Person 2, in part, “Yep I know…”

Hold onto that story in your memory banks about Jan. 9, 2021. By Jan. 12, Riley and his new buddy were communicating “extensively through Facebook direct messages about their shared interest in fishing.” If you love fishing, you really love fishing, amiright? Then, Person 1 begins stressing out about “being discussed on social media” because of their conduct on Jan. 6. Riley tells Person 1 to get off social media.

On Jan. 16, Person 1 sends Riley a link via direct message to a news story about Person 1 being arrested. Person 1 says the story is “fake news.” Riley responds that he knows a lot of people are being arrested in connection to the events of Jan. 6, and he tells Person 1 to call him, then provides his cell phone number. The two then have a 23-minute conversation.

Within hours of this conversation, Person 1 sent text messages to two other individuals indicating that he had spoken to “capitol police” and the charges against him were likely to involve only trespassing.

(Don’t forget about that video Riley acknowledged seeing back on Jan. 9!)

The two exchange Facebook messages about the charges Person 1 faces. Riley is very generous, telling Person 1: “Next time you want to come to DC just call me, you can stay at my house on the shore for free and bring your daughter to the museums. If you want to see the capitol building, lets do it legally next time…I know a guy who can get you a tour…lol. Its behind you now…lesson learned! Just ask your attorney whats next.”

Person 1 is arrested on Jan. 19 and interviewed by the FBI.

On Jan. 20, Person 1 and Riley—still communicating like best new buds—have an exchange wherein Person 1 details his experience of interviewing with the FBI. Person 1 says, “The fbi was very curious that I had been speaking to you if they havent already asked you about me they are gonna. They took my phone and downloaded everything.”

Hey [Person 1], another mutual friend was talking about you last night. I tried to defend you but then he showed me a video of you in the Capitol smoking weed and acting like a moron. I have to say, i was shocked and dumbfounded, since your story of getting pushed in the building with no other choice now seems not only false but is a complete lie. I feel like a moron for believing you… I was so mad last night I deleted all your post, but i wanted to text you this morning and let you know that I will no longer be conversing with you.

Huh. Back on Jan. 9, Riley was pretty relaxed about this exact video. Is that offer for free lodging and a tour still open?

Reporter Zoe Tillman of BuzzfeedNews reports that, while Riley’s case is pending, he will be allowed to go home under specific conditions: he must check in weekly; he must possess no firearms, or have any firearms in the home; he must notify the court if he plans to travel and cannot travel internationally without court approval; and the government will specify certain people he cannot have contact with during this time.