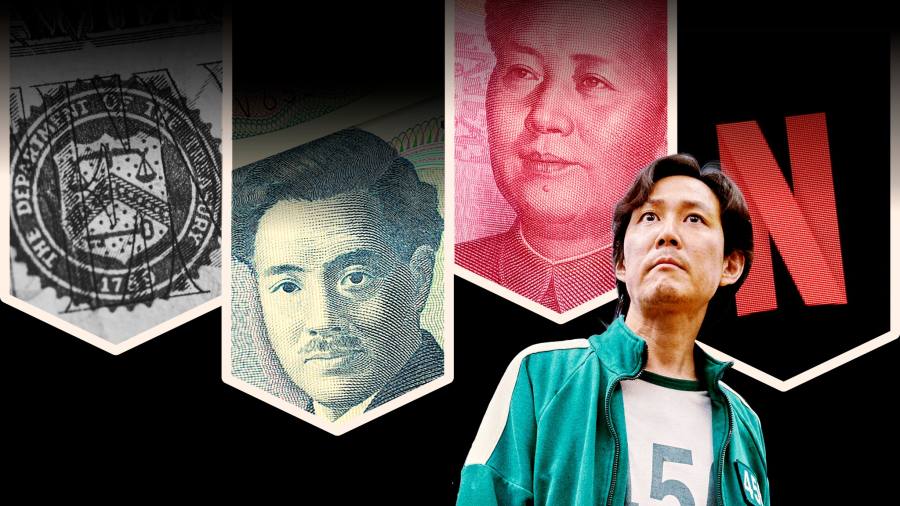 Are we there yet? It is a reasonable question for bond investors after a historic shift lower in government bond prices to reflect the increasingly hawkish tilt from the US Federal Reserve.

Sadly for those left licking wounds, the short answer is ‘probably not’. In fact, judging from this week’s wobbles, the shake-out across markets is only just beginning.

Central bankers are not sadists. Those of a mind to bump up rates to fight inflation want to try and do it without sparking undue financial market instability or, worse, economic recessions. But the path back to higher interest rates is unavoidably messy.

As Joseph Amato, chief investment officer for equities at Neuberger Berman puts it: “When the Fed pushes the brakes, someone goes through the windshield.” Assets caught without a seatbelt this week include Netflix stocks, the Japanese yen and the Chinese renminbi. More will follow.

The scale of the shift in government bond markets is something to behold. Charles-Henry Monchau, chief investment officer at Bank Syz, said the opening three months of the year were “emotional and difficult for investors”. Long-term US government bonds were already on track for their biggest annual fall on records going back to 1973, even before Fed chair Jay Powell stirred expectations this week for a chunky half-percentage point rise in interest rates next month.

Prices have dropped so fast that benchmark 10-year Treasury yields are sailing close to 3 per cent. At 2.9 per cent they are already at their highest point since 2018.

We are even, after eight years, witnessing the end of the topsy-turvy era of negative bond yields. Investors have, largely reluctantly, grown accustomed to buying bonds in the full and certain knowledge that they will lose money on them if they hold to maturity, thanks to high prices and painfully skinny interest rates. Now, fully $11tn (yes, trillion with a t) in global debt has emerged from the deep freeze of negative yields. Just a relatively modest $2.7tn remains. Germany’s perennially low or even negative-yielding 10-year Bunds are now yielding 0.95 per cent — the most since 2015.

On April 7, Barclays said enough was enough and recommended buying 10-year US Treasuries. Less than two weeks later, it ditched that call at a loss. It is a tough time to be a bargain hunter.

It stands to reason that bond markets — the asset class most sensitive to interest rates — should react so forcefully to central banks’ shift in direction. But the ripple effects in other markets are now becoming clearer.

“We are all bond traders now,” wrote currencies analyst Kamal Sharma at Bank of America this week. Major currencies are “dominated” by bond-market movements this year, he said, with “one theme to rule them all”.

The Japanese yen shows this starkly. It has swooned to a two-decade low against the dollar because of the gap in stance between the Fed, which has made no secret of its plan to jack up rates, and the Bank of Japan, which is determined to keep its bond yields low. Japanese authorities are typically fond of keeping the yen nice and weak to help support exports. In this case, though, the currency has fallen hard and fast enough (11 per cent since the start of March!) that traders are on high alert for an intervention to prop it up.

And it is not just the yen; China’s renminbi has also turned sharply lower, in part because US bond yields have crept up to China’s level for the first time in 12 years. Some market participants are wondering whether the Swiss franc might also catch the bug.

But perhaps the starkest illustration of how the Fed has changed the game for investors came this week from Netflix, the streaming service that became a must-have necessity while we were all locked down in our homes, but is now a nice-to-have luxury while households are trying to cut back on costs. Its share price crashed by nearly 40 per cent after it said it had lost customers and expected to lose more.

Netflix was one of the high-tech stocks that had already been sinking since the Fed first made its tightening intentions clearer. But the latest crash was spectacular by any standards.

“I don’t know that it’s a sign of what’s to come,” says Amato at Neuberger Berman. “I think it’s already come.” Either way, the difference in the current, more nervy market environment is clear. “If you miss a number, if you miss a sales expectation, it’s a brutal repricing,” he says.

This market environment, with sky-high inflation and the real risk of renewed recessions, points to periods of volatility and calls for caution, he says.

Investors are, of course, mindful of history here. The so-called taper tantrum of 2013, when the mere hint of the Fed pulling back bond-buying support put emerging markets assets through the woodchipper, is only the biggest and most recent example; rapid rate rises in 1994 ended up bankrupting Orange County in California and laying the groundwork for Mexico’s peso crisis.

We are not close to that point yet. But policymakers’ task of engineering a soft landing, without serious collateral damage, is tough. The latest slip-ups offer a reminder that accidents can easily happen.