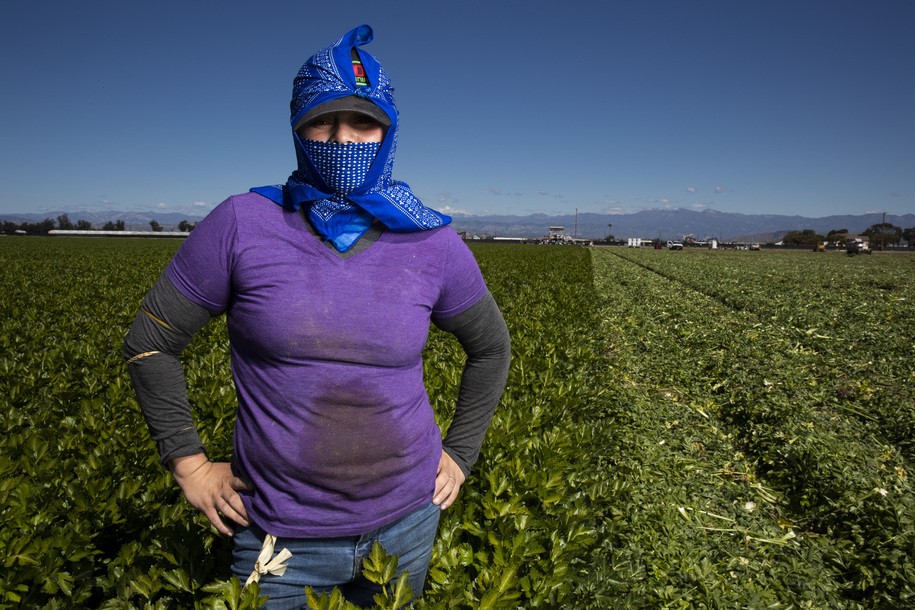 We started to do a monthly distribution of foods and home goods in the Oaxacan farmworker community because we learned that families were starving during the winter. I started to hear rumblings about this, so I went to visit a family I knew. One of the children kept crying and crying because they were hungry and I realized they didn’t have any food. The parents opened the refrigerator and showed me they had one head of lettuce, two jello cups, and a third of a gallon of milk. They told me they were ashamed that they couldn’t buy food during the winter when they’re not working. I asked, “Is this true just of your household or of the community?” They told me everyone was starving.

We got this family groceries, but we also decided to start a food bank. We partnered with the Second Harvest Food Bank to distribute food, clothes, and home goods. Viva La Mujer hands out products for women, there’s a vegan food group that passes out meals, and there are people there to administer flu shots. We have three different locations and we rotate among those locations so that this large population of Indigenous people feel safe getting the food they need.

We are basically doing secret food distributions, so I cannot publicly share the location. The people who need to know understand where they can find us. We don’t advertise or post things about it on the internet; it’s been entirely word-of-mouth and we are confident we are reaching everyone in the community who needs us. What I can say is that the area where we serve has an enormous population of Oaxacan farmworkers. They are undocumented and you don’t see them in the community a lot because they have been terrified of deportation. When they are working, they spend most of their time in the fields.

I’ve been working with farmworkers for a long time and I can say that Oaxacan people experience some of the worst poverty in the world—both in the U.S. and in Mexico. This is the legacy of the North American Free Trade Agreement (NAFTA) that was signed by Bill Clinton, which deprived farmers in Mexico of their livelihoods in violation of the Universal Declaration of Human Rights. NAFTA destroyed the livelihoods of millions of farmers who were pushed off their land and they are still struggling to find ways to survive. NAFTA also eliminated tariffs that protected sustainable farming in Mexico. The U.S.’s genetically modified corn was allowed to flow freely into Mexico, undercutting the prices farmers used to support their families. Without this income, they had no way to survive and it forced millions of farmers in Mexico who had established parcels of land and whose families farmed sustainably for millenia to migrate. Rather than reckon with this humanitarian disaster, the U.S. blames immigrants for violating its immigration laws when the U.S. is the country that set this entire catastrophe in motion.

NAFTA hasn’t worked for anyone—not farmworkers, growers, consumers, or the environment. In the neoliberal economy, you can decide that it’s cheaper to grow strawberries in Taiwan and have them shipped here, so that’s what you do and you cut local farmers out of business. Consumers who are buying local, organic food often forget that the people picking their food are exploited, abused, and in an inordinate amount of physical and emotional pain. The environment is also being destroyed. According to the World Wildlife Fund, we have lost two-thirds of all native animals on the planet since 1970. This is all completely unsustainable and the only winners are the agrochemical companies. Sure they get sued, but they keep working. Round Up can still be found on shelves even after billions of dollars in lawsuits and who knows how many deaths caused by non-Hodgkin’s lymphoma. This is a disgraceful picture and we can do so much better.

I really want people to understand that in this agricultural system, farmworkers are at the bottom of the barrel. I have worked alongside farmworker communities for decades and their life circumstances have changed very little. Their average life expectancy is 49 years. They are exposed to pesticides. The poverty they experience means they also have poor nutrition. They are lucky if they make $20,000 a year in California. They live in crowded homes with other families because the rents are too high. I’ve encountered homes where there are 16 adults and children in a home that has one bathroom and less than 1,000 square feet of space. All of this is because even though this industry would die without them, the industry treats them as discardable human beings.

COVID-19 has made everything worse. There are still farmworkers who can’t afford to buy masks and the growers they work for won’t provide masks. They tell them that if they’re so concerned about COVID, they should just go to the resignation office. You can’t socially distance when working, and not only that but farmworkers are transported to work on buses with dozens of people from different households. This is dangerous and exploitative and deeply inhumane. The size and scale of farmworker outbreaks is really underreported. People shouldn’t have to choose between feeding their kids and getting a deadly virus. At a state and federal level, these people are considered “essential workers,” but we don’t treat them this way. It’s wholly unacceptable and violent.

As a country, we really need to commit to eliminating this degradation that takes peoples’ lives. Farm workers should not have to live in constant fear of deportation; they should not be blacklisted if they file a complaint about illegal workplace conditions. Farmworkers need three immediate things to transform their lives: citizenship because no one who has spent years picking food for us should be deported; a living wage because farmworkers can’t even afford the food they pick and employers regularly steal their wages; and the elimination of pesticides in their work. These are very basic demands that the American people must start making. No human being deserves to be treated the way we treat our farmworkers.

Remote Work Can Be Better for Innovation Than In-Person Meetings