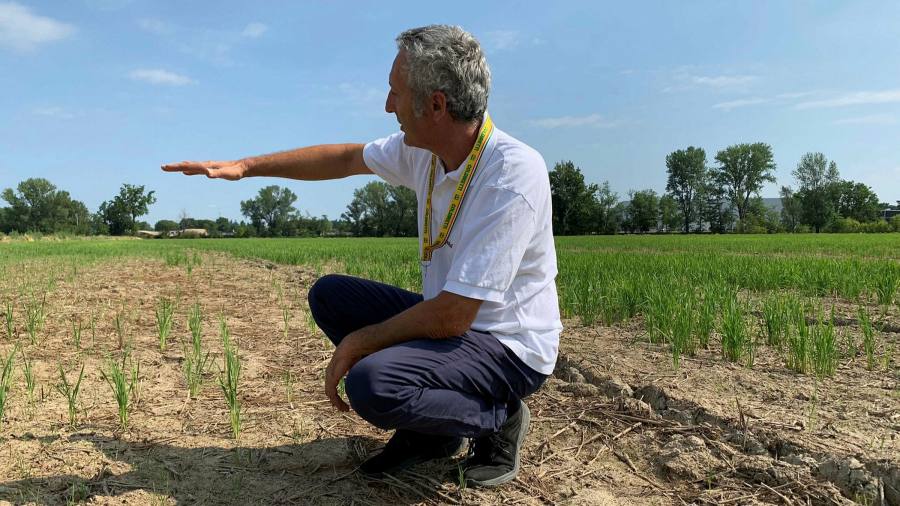 Fabio Camisani usually wears thick rubber boots to keep his feet dry while surveying the muddy paddy fields of his 70-hectare rice farm south of Milan. But this year he has been walking the parched, baked land wearing sneakers.

Meagre winter snowfall in the Alps, which has affected the flow of water from the mountains into northern Italy, and more than six months with almost no rain since, have left his crop of high-end Carnaroli rice, used for risottos, and Selenio, preferred for sushi and soups, on the brink of failure.

“Neither my father nor I have ever seen anything like this,” said the 52-year-old whose family have leased the traditionally fertile land in the Lombardy region for half a century. “If it doesn’t rain for at least five days soon, we’ll lose everything.”

Camisani’s desiccated fields are casualties of the severe drought that has struck northern Italy’s agricultural heartland, the worst climatic event since at least 2003, when a massive heatwave and drought killed 30,000 people and devastated agriculture production. Italian officials charged with monitoring river flows say the water shortage is the worst in 70 years.

The crisis, which threatens the country’s hydropower generating capacity as well as its agricultural output, is the latest setback for Italy’s struggling economy and will exacerbate already mounting inflationary pressure just as the country reels from the impact of Russia’s war in Ukraine.

Farmers and climate activists say this is not a freak event but a sign of things to come as once lush, fertile regions of Italy face sustained pressure from water scarcity owing to climate change.

“It’s not just that we’ve been unlucky in the summer of 2022,” said Luca Iacoboni, head of national programme at Ecco, a climate change think-tank. “This is not just ‘bad weather’ — this is a consequence of climate change and something that’s going to get worse and worse in the next few years.”

Italy is Europe’s largest rice producer, growing specialised varieties, mainly in Piedmont and Lombardy at the foot of the Alps using a system of irrigation channels that funnel water down from the mountains.

Northern Italy’s Po river valley generates about 14 per cent of Italy’s agricultural output, much of it from the livestock that produces the country’s famed hams and cheeses. Yet the shortage of rain means parts of the river have dried up completely.

Last weekend a glacier collapsed in the Dolomites amid a heatwave, triggering an avalanche that killed at least 10 hikers.

According to a warning issued in March by the EU Global Drought Observatory, Italy’s reservoir levels were the lowest since 1970. Water in the picturesque northern lakes Como and Maggiore, which are typically fed by Alpine snowmelt, is also a fraction of normal levels, at 26 and 12.4 per cent respectively. The level in Maggiore is the lowest since the 1940s.

The growers’ association estimated that a third of the country’s agriculture output was at risk. “We have about 30 per cent less production of milk and about 30-40 per cent less of cereals and maize,” said Fabio Bonaccorso, a Coldiretti spokesman.

He warned that Italian farmers would be forced to import the maize to feed livestock, adding to pressure on an already tight global market that is struggling to cope with the disruption to Ukraine’s grain and cereal exports caused by the war.

“If you haven’t got enough maize, you have to pay to buy crops from abroad, because you have to feed the livestock,” he said. “Without feed, you cannot produce milk. It’s a chain.”

Camisani said his Carnaroli rice stalks were normally at waist height by now, while the Selenio would reach his knees. But the few plants that have survived barely graze his ankles.

Across northern Italy, municipalities have imposed restrictions on water use in response to the drought, with some ordering barbers not to wash customers’ hair twice in a single visit. Prime minister Mario Draghi’s government has declared a state of emergency across five regions including Lombardy, with an initial allocation of a total of €36.5mn in aid for the most affected areas.

But along with emergency relief, Coldiretti said Italy needed to invest in large-scale water storage capacity to collect rainfall, most of which is lost to run-off each year. 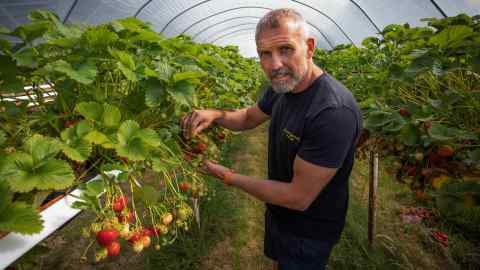 “It’s a strategic decision for the future to address this climate change,” Bonaccorso said. “We have to spend money for a new kind of irrigation and a new kind of cultivation.”

In Binasco, Camisani is anxious about how he will get through the year, as the drought coincides with the sharp price rises for fertilisers and energy. “I don’t even know if we will be able to pay the fields’ lease,” he said.

But the farmer also wonders about the future of agriculture in a once bountiful region dependent on the melt of increasingly insufficient Alpine snow to fill its irrigation networks.

“We had this incredible resource — water — that was never scarce,” he said. “Between the weather and the war, it’s the perfect storm.”