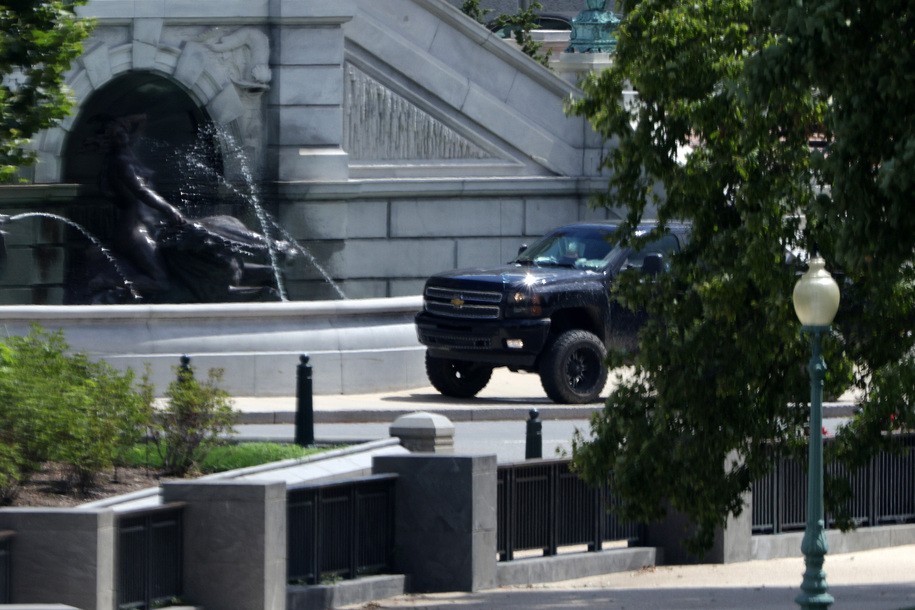 While the standoff was ongoing, authorities evacuated buildings around the Capitol; although Congress is in recess this week, staffers were seen calmly walking away from the area, following police directions. Police negotiators communicated with him throughout the incident.

Roseberry claimed during the standoff that there were four other bombs in other vehicles making their way around Washington, but officials found no indication that this was in fact the case.

Before arriving in D.C., Roseberry posted a manifesto-style video to Facebook in which he outlined his reasons for taking dire action. These included his difficulties with health insurance, both for medication for his knees and for his wife’s skin cancer.

“I cleared my conscience with God,” he said, adding that he told his wife he’d be “home” on Sunday, “whichever home it is.”

“I have no fear. None,” he continued. “That crack in my voice is from the passion for the land I love. Somebody needs to tell Joe Biden we here. Fucking revolution starts today, Joe Biden and before you go crackin’ any pops on me you better get your military experts out and ask them what a seven-pound keg of gunpowder would do with two-and-a-half pounds of [unintelligible] will do, motherfucker! You know what else? I’m not going to light it. I’m going to give Joe Biden the option to.”

He went on to claim that “he is one of five,” but didn’t clarify what that meant. “Them little roadblocks settin’ up comin’ on down here, those roadblocks ain’t gonna scare fuckin’ nobody. You wastin’ your time. Southern boys are here. You can take me out but you know what’s gonna happen, Joe Biden, there’s gonna be a chain reaction. And that chain reaction is going to be on your hands when you crack a bullet through my windows.”

“It will be a chain reaction. This revolution won’t stop, buddy. “

After arriving at the Library of Congress—which is located adjacent to the Capitol grounds and next door to the U.S. Supreme Court—and attracting the attention of law enforcement, he began livestreaming the scene, ranting about Biden and Democrats, and claiming that “patriots” were about to conduct “the revolution.” He also held up a corroded metal canister that he claimed was the bomb he had constructed with gunpowder, and claimed that he had a bomb made of Tannerite—an ammonium nitrate mixture—in his back seat.

His intention was to force Biden’s resignation: “I don’t wanna die in this truck. You step down outta office, I’ll step outta this truck,” he said.

Roseberry continued to rant: “People think it’s a joke but they cleared the block. They need to get Joe Biden down here. I’m not hurting nobody Joe. I’m not pulling the trigger on this thing. I can’t—there’s no way for me to blow this up. Only you can by shooting a bullet through my window. You don’t want to do it Joe. I love this land. We got a few options here Joe. You shoot me, this two and a half blocks is going with it. You’re talking about a revolution? The revolution is on. It’s here. It’s today.”

Roseberry’s Facebook page was full of far-right memes attacking Biden and other liberals. “It’s almost time…take a extra pair of civilians clothes for our heroes… who can carry arms in… BIDEN YOUR FIRED…NO ISN’T A OPTION…FLEE OUR LAND,” he wrote four days ago.

His Facebook likes included far-right groups such as Liberty Upheld, Defense of Freedom, US Patriot News, Secure America Now, “We Are Trump Nation,” Numbers USA, and Fox News, as well as Trump himself. His posts on Facebook featured a predictable array of proto-white nationalist talking points, including his anger at transgender people being allowed into the military, his opposition to masking, and his preoccupation with “black on black” and “black on white” crime.

Police negotiators communicated with Roseberry as he wrote notes and showed them to authorities from inside the truck, according to sources at the scene. Their main purpose to was to determine whether it was an operable bomb, officials said.

“My negotiators are hard at work trying to have a peaceful resolution to this incident,” U.S. Capitol Police Chief J. Thomas Manger told reporters as the standoff unfolded. “We’re trying to get as much information as we can to find a way to peacefully resolve this.”

Manger later said that Roseberry was arrested “without incident.” However, he noted that officials do not know whether there are still explosives in the vehicle and it is still an “active scene.” A search of the vehicle was required to render it safe, he said. There also were no reports indicating the presence of the four other bombs Roseberry claimed were circulating in the city.