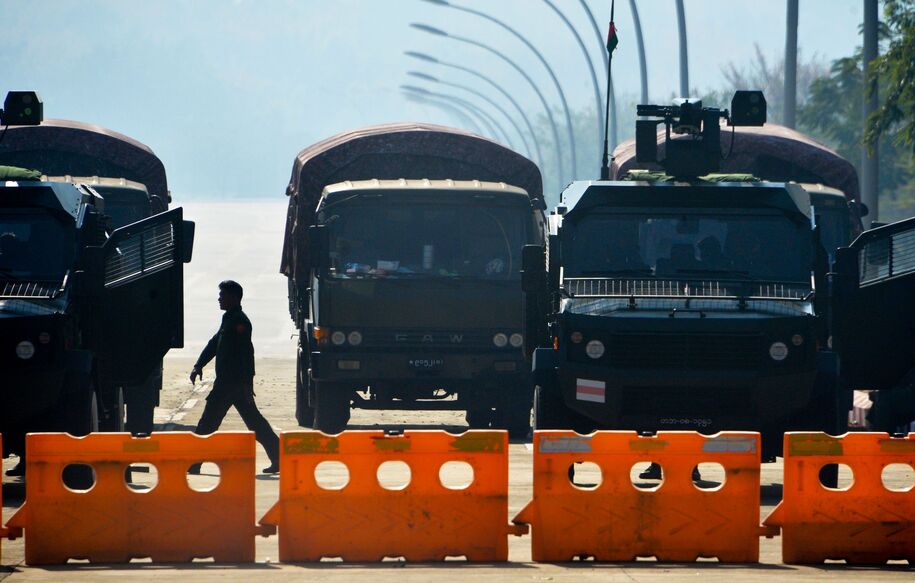 As Media Matters’ Alex Kaplan reports, top QAnon influencers wondered “when will this happen here” and when the military will “arrest [American] politicians too.” Others believe the Myanmar coup ought to be “a lesson” for Biden.

“The Burmese military has arrested the country’s leaders after credible evidence of widespread voter fraud became impossible to ignore. Read this Reuters article and watch them cover for the government, calling it a ‘coup against a democratically elected government’,” posted one influencer on Telegram with more than 45,000 subscribers. “Sounds like the controlled media and Biden admin are scared this might happen here.”

“We will see this headline here soon,” another QAnon believer with more than 50,000 subscribers on Telegram wrote, linking to a tweet from a far-right news website about the Myanmar coup.

One of the many theories floating about Telegram (featured in a thread with more than 165,000 subscribers) claims that Myanmar is a major site of human trafficking—which is the ostensible focus of the QAnon theories—and that, moreover, there are “links” between the country (notably deposed leader Aung San Suu Kyi) and QAnon’s primary suspects, Hillary Clinton and Barack Obama. This theory’s implication is that “we are seeing the first signs of military takeover that is also planned for the U.S.,” Amaranth Amarasingam, a professor and researcher at Queen’s University in Ontario, told Rolling Stone.

Another theory connected China and two companies that played major roles in Trumpian promoters of false voter-fraud conspiracy theories, Smartmatic and Dominion Voting Systems, with the coup. The theory claimed that the two companies also oversaw fraud in Myanmar’s elections, suggesting the military acted in order to blunt the electronic vote fraud.

On the far-right message board 4chan, one commenter posted: “They too had a disputed election in November but unlike the Americans, they seem to have actual balls.”

Other comments from around the far-right corners of social media:

“That should be us.”

“I’m thinking this is a wake up call that not all military coups are bad.”

“When will this happen here?”

“Take note; Let this Myanmar thing be a lesson; when the Military decides to move – it comes out of nowhere and is swift and clean.”

“Myanmar’s awakening and Peruvian government waking up. When will the rest of the world decide it’s time to end the cyclical treasonous fraud and purge their government of the corruption? U.S. will you do the same? Letssss Gooo!”

“More and more having red pill revaluations. If we are to clean out the garbage we must ALL act. Words without action are just words!”

As Rolling Stone’s Ed Dickson observes, QAnon cultists seeking vindication after the serial failure of all their conspiracy-theory predictions have become obsessed with the claim that the the results of the election were fraudulent: “Many have been pushing the claim that Trump will return to office, possibly by force of a military coup. And they have been invigorated by watching this exact scenario taking place in the small southeast Asian country.”