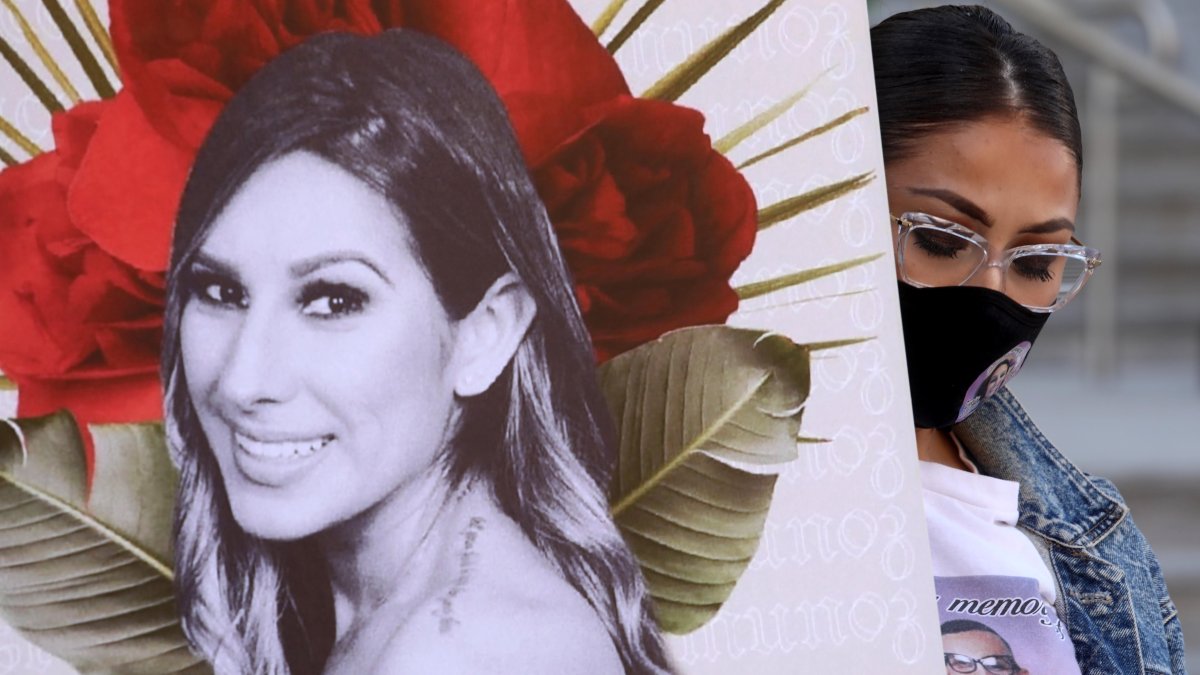 The family of Monique Muñoz reached an $18 million settlement in a lawsuit against the parents of a teen who was driving a Lamborghini SUV at nearly 100 mph when he ran a red light and crashed into her car in West Los Angeles.

Muñoz, 32, was killed in the Feb. 17, 2021 crash at Olympic Boulevard and Overland Avenue. She was turning left when her Lexus sedan was struck by a Lamborghini Urus driven by the then-17-year-old son of multimillionaire businessman James Khuri.

The high-end SUV was traveling at nearly 100 mph, investigators testified at a juvenile court hearing.

Muñoz was driving home to Hawthorne from her job at UCLA Health in Los Angeles when she was killed.

“Today is a significant milestone because the Muñoz family can finally get some closure for this horrific tragedy,” attorney Daniel Ghyczy, who represents the family, said in a statement. “The family faced numerous hurdles from both private insurance companies and the L.A. District Attorney’s office, and experienced the harsh realities of racism and bias against those from underserved communities.”

The award could exceed $25 million, attorneys for Muñoz’s family said. During Wednesday’s hearing, the judge continued the case to a later date when the family’s total restitution will be determined.

The teen was ordered last year to serve seven to nine months in a juvenile camp after admitting a Juvenile Court petition that charged him with vehicular manslaughter.

The teen son of a wealthy businessman is arrested weeks after a fatal cash in West Los Angeles. Video broadcast Thursday March 11, 2021 on Today in LA.

“The family pleaded for the district attorney to investigate this case and met with the office dozens of times to advocate for their family,” Ghyczy said. “It was never about money for the Muñoz family, it was about acknowledgement of (the teen’s) misconduct that resulted in the death of their only daughter and to ensure that he was held accountable. Today’s settlement is a testament to their efforts and is a step closer to justice.”

At the juvenile court hearing, a LAPD officer testified about what was found on the SUV’s event data recorder. The vehicle’s speed was recorded at 86 mph five seconds before the crash with the driver’s foot “completely on the gas pedal 100 percent,” Officer Daniel Whitmore said.

The SUV was traveling at about 106 two seconds before the crash, he said.

The data recorder indicated the brakes were applied, but only slowed the SUV to somewhere between 77 and 92 mph when it collided with the passenger-side of the Lexus.

The crash occurred during rush-hour traffic in a 35-mph zone.

The teen, whose name was not released because of his age, apologized to Muñoz’s family during the court proceeding, saying, “Please know that I am so deeply sorry from the bottom of my heart.”

“I am aware that the time it has taken me to communicate this has caused further pain for everyone affected,” the post said. “Knowing that this will never do justice for the family of Monique Munoz, I want to apologize to the Munoz family for the tragic loss of their daughter. There are no words I can say to alleviate the pain that your are experiencing. And I realize none of my words or actions will be able to bring back your daughter.”

In a letter read in court by the prosecutor, the victim’s mother wrote that the teen made an “avoidable and deplorable choice” and that the hardest part has been to learn to live without her daughter, whom she called her best friend.

“The only comfort I have is that she knew how loved and adored she was,” Carol Cardona wrote in the letter.

Relatives of the victim and activists claimed that charges were not filed quickly enough in the case due to the wealth and influence of the teen’s father. Khuri is described by Forbes as a multimillionaire who owns several real estate firms, manufacturing companies and an e-commerce business.

Police said a delay in the driver’s arrest, which came Feb. 23, 2021, was because he was hospitalized with injuries.

James Khuri was charged with a misdemeanor for contributing to the delinquency of a minor. A hearing in that case is scheduled for June 8.