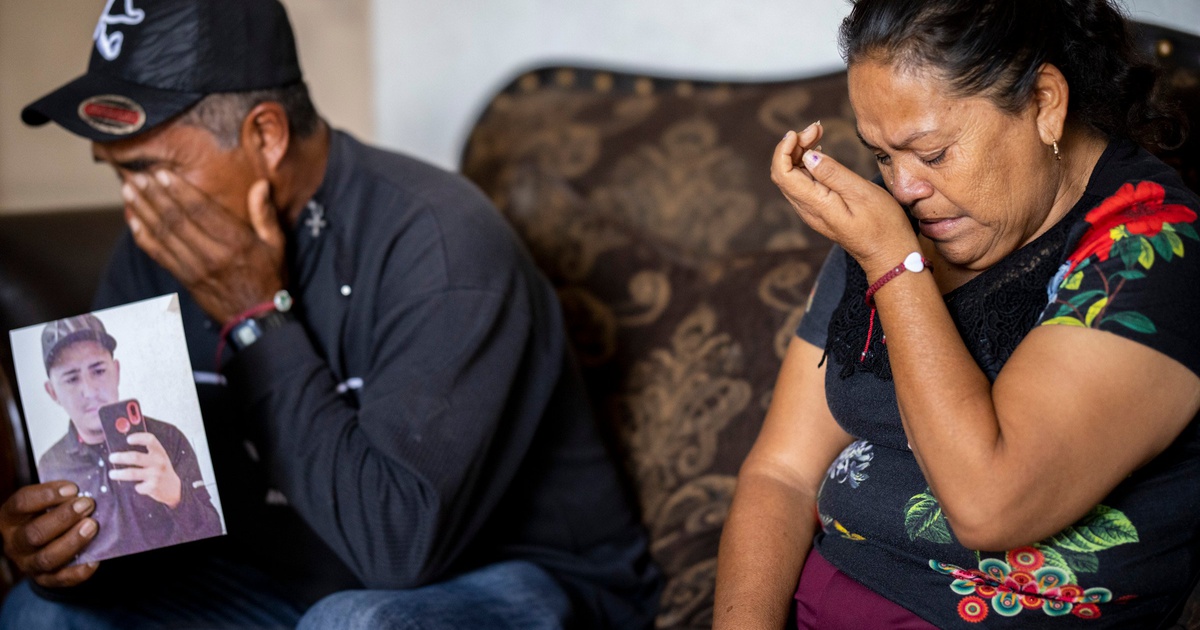 EL PASO — On Sept. 14, after a day of picking melons in a small ranching town in Durango, Mexico, with his father, Jesús Iván Sepúlveda Martínez packed a small duffel bag with some clothes and a blanket. Sepúlveda Martínez approached his common-law wife and their 6-month-old daughter and told them goodbye.

Sepúlveda Martínez, who sometimes went by “Chuy” or “El Chore,” then got into a gray Ford Focus and his father, Napoleón Sepúlveda Moreno, drove him to a bus station an hour north of their town. After an 11-hour ride to the border, the 22-year-old stayed with an aunt in Ciudad Juárez, then crossed the border illegally with a group of other Mexican migrants.

Sepúlveda Martínez planned to join his 34-year-old brother in Austin and work painting houses for a couple of years — he figured he could earn enough in that time to come back to Durango and build a house for his wife and daughter so they could move out of his parents’ home.

“He seemed happy and I kept telling him to take care of himself and not to separate from the group he was going with,” Sepúlveda Moreno said.

Sepúlveda Martínez and the other 12 people in his group had traveled about 100 miles east of El Paso when they stopped to drink out of a reservoir near Sierra Blanca on Sept. 27. That’s when police say he was fatally shot by 60-year-old Michael Sheppard, the warden of a local immigration detention center. A woman in the group suffered a gunshot wound to the abdomen and remains hospitalized.

“I’m shattered and I’m disappointed by the men who took my son’s life,” Sepúlveda Moreno said. “I hope those evil men get the strongest punishment they deserve.”

Sheppard and his twin brother Mark Sheppard, who police say was present during the shooting, on suspicion of manslaughter and transferred from the El Paso County jail to the Hudspeth County jail and released Monday in lieu of a $250,000 bond each. The El Paso Times reported on Wednesday that the Hudspeth County Sheriff’s Office said the brothers are now facing aggravated assault with a deadly weapon charges and were arrested and booked into jail again on Tuesday evening.

According to a probable cause affidavit from the Department of Public Safety, migrants in the group told police that when they stopped at the reservoir, they saw a truck pass, then stop and back up. They hid behind brush and heard someone yell in Spanish, “Come out you sons of bitches, little asses,” the affidavit says.

Michael Sheppard then got out of the truck with a shotgun, leaned against the hood and fired two rounds, the affidavit said.

A spokesperson for LaSalle Corrections, the company that runs the West Texas Detention Center in Sierra Blanca, said it fired Michael Sheppard after the incident.

U.S. Immigration and Customs Enforcement, or ICE, took the other migrants into custody. A spokesperson for the El Paso County District Attorney’s Office said that as of Wednesday morning, “the case has not been presented to our office.”

The woman in the group who was wounded, 31-year-old Brenda Berenice Cacias Carrillo, is from San José de Bellavista, a town close to where Sepúlveda Martínez lived. Her aunt, Silvia Carrillo, said Cacias Carrillo, a single mother with three children, was on her way to Amarillo to join her cousin and work cleaning a bank and other commercial offices.

The night she was shot, Cacias Carrillo sent her aunt a voice message on WhatsApp: “Aunt, I’m dying. I got hit with a bullet, oh God. Everyone else is OK, just me and another young man got shot. The young man died and I think I’m going to join him.”

Caught twice at the border, he tried once more

Sepúlveda Martínez was the second youngest of five siblings — he had three older brothers and a younger sister. He was a restless kid but as he grew up he became reserved and quiet and usually talked only when people spoke to him, his parents said.

His town didn’t have a high school so he would ride his motorcycle to a school about 15 minutes away. That’s where he met Carlos García, now 23, who was in the same class. García said he brought Sepúlveda Martínez into his circle of friends. After that, they were inseparable.

After graduation, they didn’t see each other as much but would run into each other at parties, García said. He said he didn’t know his friend had left Durango for Austin but wasn’t surprised because Sepúlveda Martínez now had a family.

“He just wanted to work and get his family ahead,” García said in a phone interview.

When he graduated from high school, Sepúlveda Martínez met a woman with whom he had a daughter who is now 3. The relationship didn’t work and eventually they broke up, Sepúlveda Moreno said. Meanwhile, he found work harvesting melons with his father during the summers and picking tomatoes the rest of the season.

Almost a year ago, he asked a childhood friend, Sandra Lizeth Cárdenas Ramírez, 21, to be his girlfriend, she said. Cárdenas Ramírez had to get permission from her mother. With her mother’s blessing, she moved into Sepúlveda Martínez’s family’s house, she said.

“What I liked about him was that he was always in a good mood, I never saw him get mad and he treated me with respect,” she said.

Immigration officials have said there have been a record-breaking number of apprehensions at the southwest border — 2.1 million — in the first 11 months of this fiscal year, which ended on Sept. 30. A growing portion of those apprehensions are repeat crossers like Sepúlveda Martínez who are caught multiple times; the recidivism rate has reached 27%, the highest since 2015.

His parents and wife didn’t want him to try again last month, but they understood. Working in the fields barely pays enough to buy food, his parents said. Finding better-paying work, they said, means leaving for bigger cities — or going to the U.S.

“When he told me he was going north, I didn’t tell him yes or no because I thought to myself, ‘Well, what else can I do to help him?’” said Sepúlveda Martínez’s 49-year-old mother, Luz María Martínez Castro.

Two days later after his son was shot to death in the Chihuahuan desert, Sepúlveda Moreno went to the nearby city Torreón for a doctor’s appointment. He said when he returned home about 6 p.m., his cousin poured him a shot of tequila, then another. He had bad news.

Sepúlveda Moreno said he stepped outside and called his sister in Juárez, who broke the news.

“They killed him,” she said.

“I began to cry and that whole night was a nightmare for me,” Sepúlveda Moreno said. “They left my granddaughters without a provider. Who is going to help provide for them now?”

Later that week, the family traveled to Juárez, hoping to get permission to cross the border to see his body — so far, they haven’t been granted the necessary visa to cross. Sepúlveda Moreno said officials with the Mexican consulate told him it would take about a week before they send his son’s body back to Durango.

Cárdenas Ramírez said she doesn’t know how she will tell their infant daughter that her father is dead. Or when.

“I haven’t thought about what to tell my daughter or how to explain to her what happened,” she said. “Right now, I just want justice, I want them to get the punishment they deserve.”