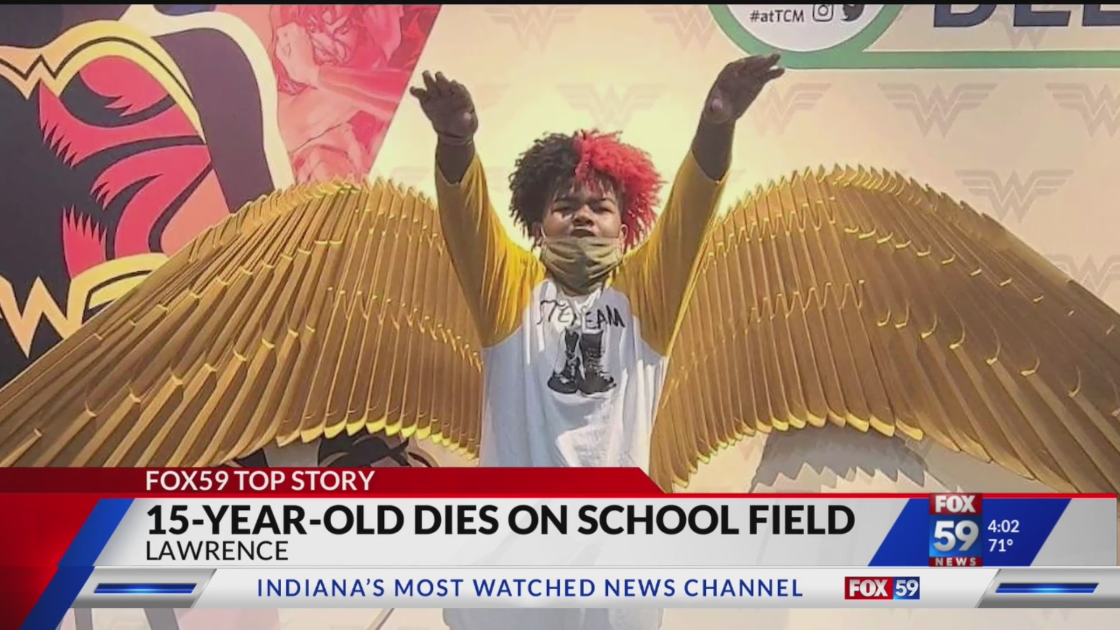 INDIANAPOLIS — The Lawrence North High School community, along with friends and family of a 15-year-old boy, are mourning his loss after he collapsed during a workout Monday and died.

Robinson said their family is working to cope with the news of R’Mon’s unexpected death. She said her nephew was healthy and she wasn’t aware of him having any previous health conditions.

“How could this happen to a young teenage boy? You know what I’m saying, it’s shocking,” said Robinson. “My young niece called us and said that R’Mon died. We sat for hours trying to understand what the heck was going on. We didn’t know what was happening.”

She shared that her nephew was someone that people loved to be around, that he had many friends and enjoyed watching anime.

“That was how he expressed himself to the world as well. If anyone knows anything about anime, you know there’s always a character that is going around helping other people or trying to inspire other people to do certain things,” said Robinson. “The last time I saw him he dyed his hair. Half of his hair was red, half of his hair was black. I was like, oh man, you really took over the personality of the characters.”

While Robinson shared that R’Mon also liked to keep to himself sometimes, it was evident in speaking with his classmates and friends that he left a big impact on the school community.

“It was very heartbreaking to me when I found out about the news,” said classmate Ernesto Vazquez. “He was a very good kid, you know, he was funny, energetic.”

“It was traumatizing to me. I just – he was a great kid. A great friend too,” said Rafael Nava. “It was just sad.”

Nava said he was leaving practice early from the field when everything happened Monday night.

According to initial information provided by district officials with the MSD of Lawrence Township, R’Mon died while at a track and field practice. His family tells FOX59 that he was not participating in track, but was at the field for football practice when everything happened.

“He was doing football just to be clear,” said Robinson.

A spokesperson for the school district declined an on-camera interview Tuesday. Officials, however, said that the football and track and field coach are the same person and that the majority of football players participate in both sports, which fall in different seasons. There was a track and field practice going on Monday night while R’Mon was there.

The district later clarified that R’Mon was at the field for a conditioning workout. We asked whether he was under the supervision of coaches and staff at the time he collapsed and died and are awaiting a response on the question from district officials.

Robinson said their family is hurt and saddened by R’Mon’s passing and said they want answers on what happened before the teen collapsed and ultimately died. They also wonder whether more could have been done to help him before it got to this point.

“It just seems so unfair for him to be taken away so quickly and I feel like it could have been avoided,” said Robinson.

As their family waits to learn more on the events that preceded R’Mon’s passing, they also want people to take the time to honor him by remembering who he was, and continuing to spread joy by doing good things for others.

“That was the type of person he was, always inspiring others to do better or be better,” said Robinson.

His classmates and friends said this catastrophic loss showed them how precious life is. They plan to honor R’Mon by never taking that for granted, and also keeping his memory alive.

“You never know what can happen to somebody that’s a loved one or close friend,” said Vazquez.

Nieto added, “Just like, be like him. Have a little bit more energy, be funny, try to just enjoy your life while you’re here.”

A fundraiser has been set up by the family of R’Mon after his unexpected death. You can read more about it by visiting the link, here.

The Marion County Coroner’s Office had not released R’Mon’s cause of death as of Tuesday night.