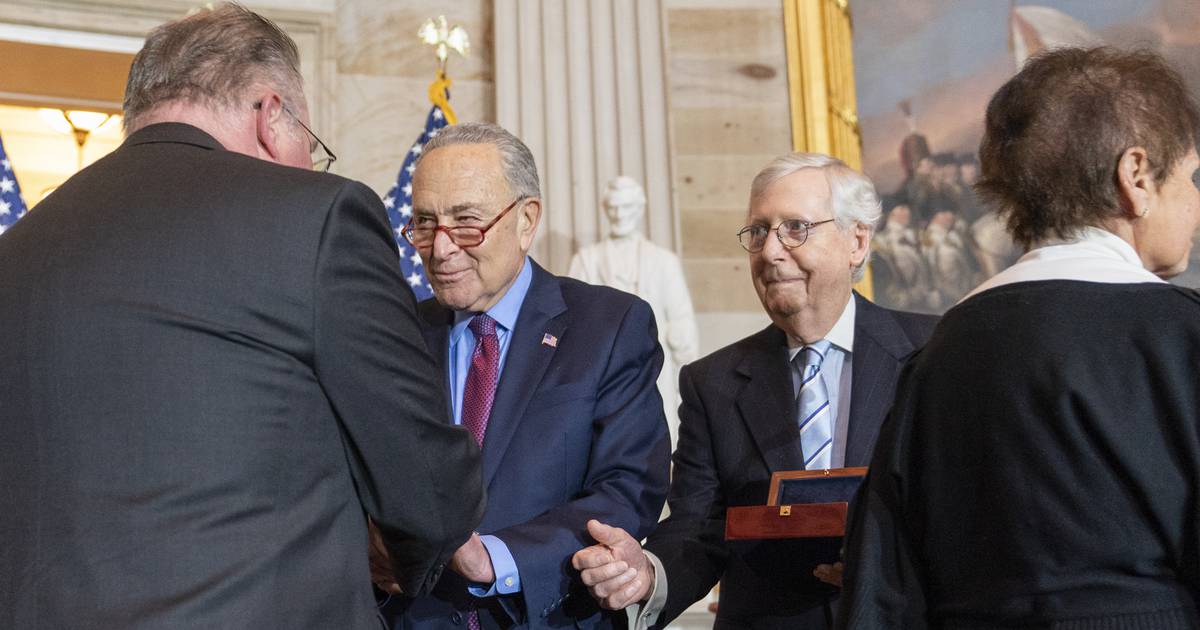 WASHINGTON — Relatives of a Capitol Police officer who died following the Jan. 6, 2021 insurrection refused Tuesday to shake hands with Republican leaders when Congress formally thanked the cops who defended the capitol against the mob.

But when their turn came in the receiving line, members of Officer Brian Sicknick’s family declined to shake hands with McConnell and House Republican Leader Kevin McCarthy.

A photos showed McConnell with an outstretched palm as Sicknick’s mother passed him by.

Gladys Sicknick said Republicans were “two-faced” in their handling of the Jan. 6 aftermath.

“I’m just tired of them standing there and saying how wonderful the Capitol police is and then they turn around and … go down to Mar-a-Lago and kiss his ring and come back and stand here and sit with – it just, it just hurts,” Sicknick told CNN.

Gladys Sicknick had lobbied McCarthy and other Republican leaders for the formation of an independent commission to investigate the Capitol attack.

But ultimately, both McConnell and McCarthy voted against establishing an independent commission, and McCarthy has loudly complained that the House Jan. 6 panel is a partisan group.

Ken Sicknick, one of the late officer’s brothers, told NBC News that the family’s refusal to shake Republican leaders’ hands was “kind of self-explanatory.”

“They continue to perpetrate the big lie, or at least not denounce it, which is basically the same thing, and they refuse to condemn Donald Trump,” Ken Sicknick said.

The rioters stormed the seat of government after defeated President Donald Trump implored them to “fight like hell” to stop the certification of the election results.

Dozens of officers suffered injuries as the rioters attacked the police with American flag poles, makeshift clubs, fists and chemical sprays. Sicknick died the next day of two strokes which a medical examiner attributed to natural causes.

But the Capitol Police said the strokes were “due to injuries sustained while on-duty.” Two Jan. 6 rioters were charged with assault by attacking Sicknick and other officers with bear spray.

“We acknowledge that no honor, no recognition can bring back the officers we lost to the attack,” said Senate Majority Leader Chuck Schumer, who recalled how rioters got within 30 feet of him while police hauled him to safety.

“We mourn their loss. We pray for their families, and we honor their limitless heroism in the face of the unthinkable,” Schumer added.

Washington, D.C. police chief Robert Contee said that many of the officers in attendance for the ceremony where back on the Hill for the first time since the insurrection.

“Many of us still carry the physical, mental and emotional scars after that mob of thousands launched the violent assault in an attempt to halt the counting of electoral ballots,” Contee said.

“These brave men and women in uniform stood strong in the line of duty for our country. And we’re forever grateful for that,” McCarthy said at the ceremony.

The event came as the House’s January 6 Committee rushes to release a final report on the attack before McCarthy and Republicans take control of the House in January. McCarthy has pledged to end the committee.