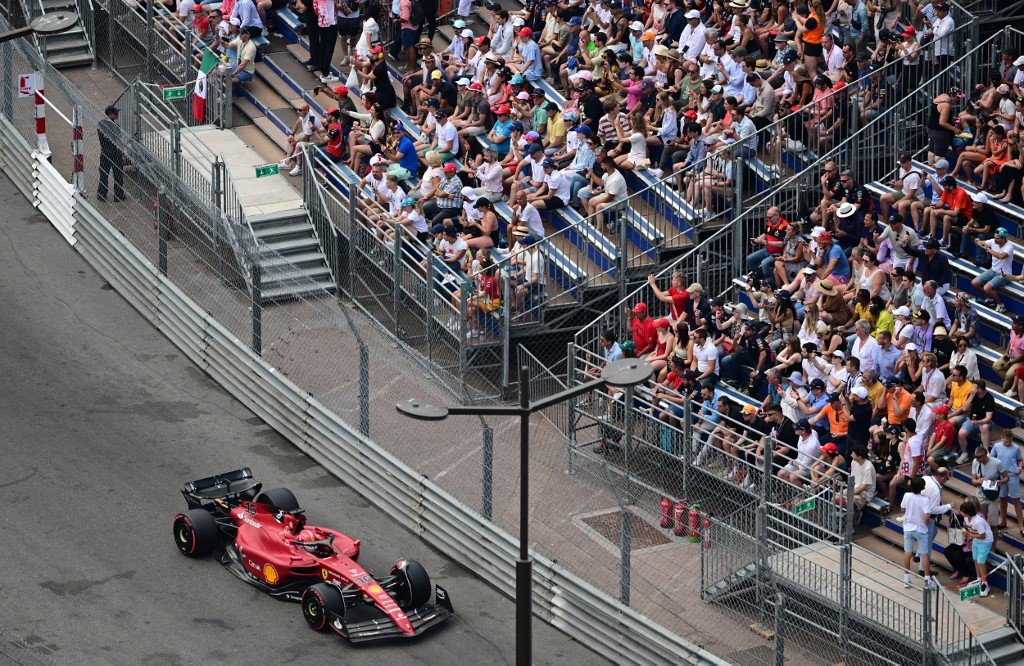 Ferrari’s Monegasque driver Charles Leclerc drives during the qualifying session at the Monaco street circuit in Monaco, ahead of the Monaco Formula 1 Grand Prix, on May 28, 2022. (Photo by SEBASTIEN BOZON / AFP)

Charles Leclerc secured pole position for his home Monaco Grand Prix with a sigh of relief and a smile on Saturday after a crash-hit finale to a dramatic qualifying session.

The 24-year-old Monegasque driver topped the times ahead of team-mate Carlos Sainz in a commanding Ferrari front row lock-out to claim his fifth pole of the season and the 14th of his career.

Sainz’s hopes of snatching the prime grid position from Leclerc were dashed on his final lap when he collided with Sergio Perez’s Red Bull, seconds after the Mexican had slammed his Red Bull into the barriers at Portier.

“It’s such a shame,” said Sainz. “I tried to avoid him the best I could. It’s another year when a red flag has cost us at the end of a session and I could not go for pole, but that’s just so typical of Monaco.”

Perez qualified third ahead of his Red Bull team-mate series leader and defending champion Max Verstappen, who was a frustrated fourth.

Last year, Leclerc crashed after securing pole, but he was unable to start the race and remains in search of his first finish on the streets of his native Mediterranean principality.

“It’s so very special for me,” said a delighted Leclerc, who is six points behind Verstappen in the title race. “I’m so incredibly happy!

“It’s been a very smooth weekend until now. The pace was in the car, I just had to do the job. It went perfectly and that last lap, before the red flag, was really, really good, but it didn’t change anything for us.

“It was really on the limit, but the car felt amazing and it’s great to have Carlos with me on the front row.”

With dark clouds looming and rain forecast for Sunday, he added: “I think dry is a bit more predictable, but whatever comes we are competitive so we are fine.”

Sainz added: “We had really good pace all day just building it up for ‘quali’ but we will never know. Anyway, let’s try and finish the job tomorrow. I think we are in a great position to score a great result for the team. The car has felt amazing and we’ll go for it.”

Leclerc clocked a best lap in one minute and 11.376 seconds to outpace Sainz by more than two-tenths in a scrappy end to an intriguing day’s action ahead of Sunday’s classic 78-lap race.

Behind the Ferraris and Red Bulls, Lando Norris led the rest of the pack for McLaren taking fifth ahead of friend and fellow-Briton George Russell of Mercedes, Fernando Alonso of Alpine and Lewis Hamilton of Mercedes.

Alonso also survived a late crash unscathed as the teams checked weather forecasts carefully with rain expected to sweep into the Mediterranean principality on Sunday.

Norris was first out for the season’s most famous qualifying hour, his time quickly beaten by Hamilton before Verstappen went top.

The track was clearly evolving in slightly changed conditions with clouds and cooler weather prevailing. The air temperature was 25 degrees and track 47, having been 52 for final practice.

“I have no grip whatsoever,” reported Russell on team radio, a complaint reflecting a general early struggle before tyres warmed and grip improved.

He persevered as Ferrari swept to the top with Leclerc leading Sainz before a late red flag halted the action when Alfa Romeo’s Zhou Guanyu clipped a barrier at the ‘Nouvelle’ chicane, suffering a puncture.

Only four minutes remained, just time enough for another flying lap, but not sufficient for Hamilton, Bottas, Pierre Gasly or Zhou, the only rookie in the field, who missed their opportunities in a frantic finish.

Out in a stream of profanities went Williams’ Alex Albon, Gasly of Alpha Tauri, Aston Martin’s Lance Stroll, Nicholas Latifi in the second Williams and Zhou. It was the first time Gasly had failed to progress from Q3 in Monaco.

Leclerc, however, showed no such concerns as he set the pace again in the top-ten shootout with a stunning lap, two-tenths faster than Sainz.