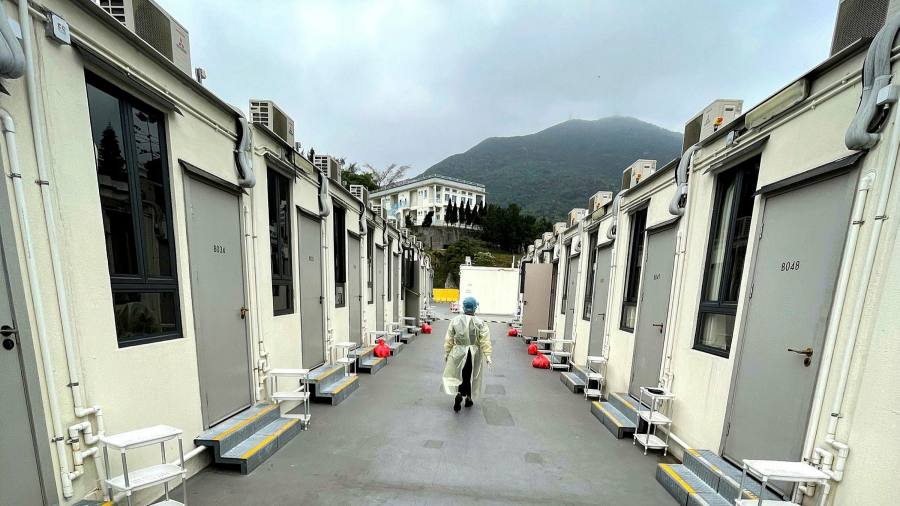 An unknown number flashed up on the phone of Kylie Davies-Worley, a retail consultant who has lived in Hong Kong for almost 20 years, at 8.30am on Saturday morning.

Her 18-month-old son had been exposed to coronavirus at a playgroup, the caller said. A bus would arrive in the next 24 hours to take them to a government quarantine camp where they would be detained for the next 14 nights.

“At that point we hit panic stations,” Davies-Worley said.

Their experience was mirrored by hundreds of families across Hong Kong last week, sparking a debate among the expat community over the trade-off between civil liberties and controlling Covid-19.

For many expats, it marked the first time they have been confronted with the harsh reality of the battle against coronavirus in Hong Kong, where cases have been far lower than in their home countries.

“We get that it is necessary, but the three of us locked in this tiny room is not a good set-up for babies,” said Davies-Worley’s husband Nick, an executive at consulting group Bain, from a quarantine camp near Hong Kong’s Disneyland resort.

About 860 people were quarantined last week following an outbreak at Ursus Fitness, a gym popular with expats.

It has grown into the second-largest cluster of cases in Hong Kong since the start of the pandemic, spreading rapidly through the city’s expat and financial community.

At playgroups and international schools, dozens of children were taken to quarantine, while thousands of residents of mostly expat buildings were ordered out of their homes by authorities late at night for mass testing. Banks such as HSBC and other businesses that employ large numbers of expats have closed offices.

The government last week reversed a decision to quarantine a class of eight- and nine-year olds at Kellett, a top British international school with annual fees of £20,000, after pressure from parents.

But the decision led to an outcry by some pro-Beijing media outlets in the city that claimed wealthy foreign residents may be given preferential treatment.

Many Hong Kong expats work in financial services, which accounts for about 20 per cent of the city’s gross domestic product, according to government data.

The international chambers of commerce and global banks have used that clout to raise concerns about the quarantine measures and their potential impact on businesses in the city.

“It’s getting harder for us to convince our top talent to be here if their spouse is freaking out about getting a call in the night saying ‘pack your bags’,” said an executive at a large US investment bank who did not want to be named. “It’s Orwellian.”

The frustration and annoyance expressed by the expat community has not always received a sympathetic hearing. More than 42,000 people have been sent to quarantine centres since the start of the pandemic.

“Expats tested positive not wanting to follow the local rules set by the HK gov can just move back to the countries they came from,” wrote one individual on Twitter.

“Basically expats [immigrants] in HK want special treatment because they’re in banking, let them leave and see how their fam survive in UK lockdown or US crazy outbreak,” wrote another.

Hong Kong’s measures for controlling the pandemic are among the strictest in the world. Anyone who has been in close contact with a positive case of Covid-19 is required to stay in a government centre for two weeks. Everyone who tests positive is taken to hospital. Anyone entering Hong Kong must quarantine in a hotel for 21 days.

The measures have prevented the need for any territory-wide lockdown or mass closure of businesses during the pandemic. The city of 7.5m people has had fewer than 11,500 cases and only 203 deaths since January last year.

“I’m paying the price for controlling the virus and so are my family,” said an investment banker who is in hospital and whose wife and two children are in a quarantine centre. He too, requested anonymity.

“If you took away the stress of worrying about the children, it is a good system,” he added. “Hong Kong deals with it brutally but effectively.”

Worries voiced by parents to the Financial Times included no access to fridges, cots or fresh food, and children as young as 11 months not being allowed outside. The US consulate in Hong Kong said last week it had concerns “particularly in regard to the possible separation of children from their parents”.

Under Hong Kong policy, all confirmed Covid-19 patients are hospitalised in isolation wards. That has created a problem for families because a parent or child who tests negative may be separated from their family member.

After days of public pressure, health authorities said this week that parents and children were allowed to stay in the same hospital room but that this was “subject to the agreement of [health authorities] and the availability of isolation capacities”.

A WhatsApp group has been set up by families and friends of people sent to quarantine camps. Volunteers have offered to take mini-fridges and Wi-Fi dongles to the camps and walk dogs left behind at home.

“We were finally allowed to go and drop off some fresh fruit,” said a finance professional who did not want to be named, whose son and nanny were in quarantine after attending a playgroup together. “They’ve had the same meal for the last six meals. Rice and carrots and cabbage. Today they were given some plain pasta and an orange.”

However, many expats are generally supportive of the policies. One described quarantine as: “It’s clean, it’s safe, it’s boring as hell.”

David Hui, the government’s adviser on coronavirus containment procedures, told the FT: “You can’t really consider too much about humanity when it comes to fighting the epidemic.”