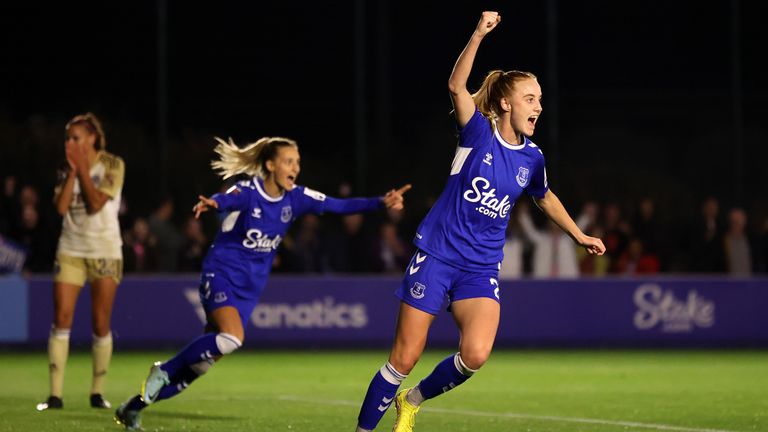 Hanna Bennison’s free-kick deflected off goalkeeper Kirstie Levell and in to hand Everton a 1-0 victory over Leicester in added time at the end of the Women’s Super League contest at Walton Hall Park.

Levell’s late intervention from the Swedish substitute’s dead ball delivery decided a cagey contest in front of a sold-out crowd and left the visitors still seeking their first point of the campaign.

How Everton left Leicester still searching for their first point…

Neither side was able to create any real chances in the opening exchanges as Leicester’s back line responded well to the hosts’ high press.

The Foxes had their first opportunity when Molly Pike looked to chip Emily Ramsey but her effort instead landed in the hands of the Toffees keeper.

Everton’s first chance came midway through the second half when Nathalie Bjorn slipped the ball to Katja Snoeijs but her effort was well-blocked by Levell.

Izzy Christiansen then tried to pick out Snoeijs, but the Dutch international was not there to finish and Christiansen could only watch her cross sail across the face of goal.

Lucy Graham could only muster a half-chance from the edge of the area, pivoting before firing wide from her less-preferred left foot as the visitors fended off a sustained period of attack. And at the other end, Megan Finnigan easily cleared a Jemma Purfield delivery into the box to send the sides goalless into the break.

A chance at the restart saw Josie Green’s effort blocked, and Brian Sorensen’s side survived a scare when Ramsey, on her competitive debut for the Blues, collided with Sam Tierney but was able to continue after requiring attention.

The visitors won a free-kick and Purfield aimed straight at goal but saw her effort parried away by Ramsey.

Gabby George tried to get things going for the hosts as her low effort from a tight angle was stopped by Levell.

Substitutes for both sides missed opportunities in quick succession, with Natasha Flint unable to connect with a cross to head in for the Foxes before debutant Karen Holmgaard fired a sharp attempt at Ramsey.

Bennison nearly broke the deadlock on 69 minutes, deftly dodging her marker before curling an effort wide of the right post.

It was the beginning of a period of pressure from the hosts, with Gio Queiroz driving down the right and into the area but failing to get a good angle on her low, right-footed effort.

With few chances for either side as the match drew to a close, Everton floated in a corner but Levell got a glove on it and batted away any chance of an opener.

Finally, as the clock ticked into the fourth minute of stoppage time, Bennison broke the deadlock with an inswinging free-kick that found the top corner via the unfortunate Levell.

Everton next play on October 16 when they host Chelsea after the international break. Leicester travel to Man City, also on October 16, but before that they face a trip to Blackburn in the League Cup on Sunday.