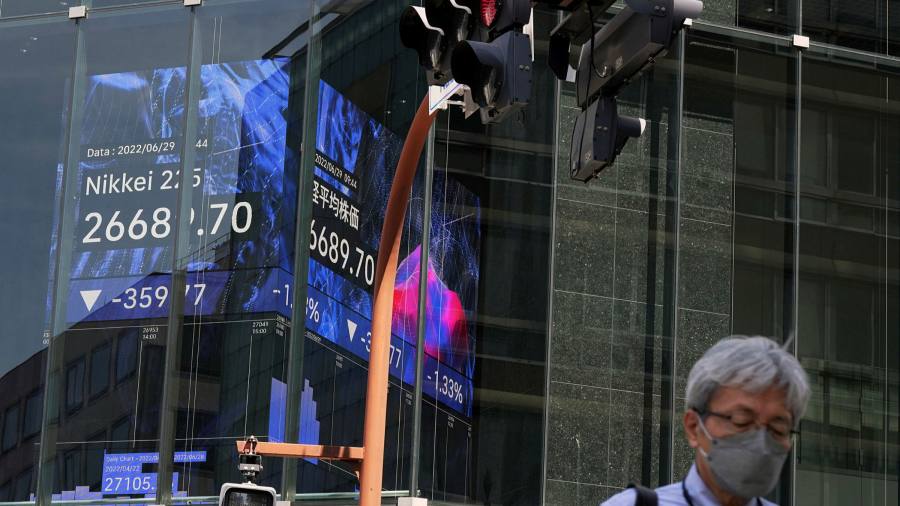 The regional Stoxx Europe 600 share index fell 1.2 per cent in morning dealings, calling a halt to three days of gains. Germany’s Dax slipped 2 per cent and the FTSE 100 was 0.5 per cent lower in London.

Those moves followed heavy losses overnight for Wall Street’s main US share indices, after a lacklustre US consumer confidence report fuelled concerns about a downturn.

Futures trading implied the S&P 500 share index would slip a further 0.2 per cent lower in early New York dealings, with contracts on the tech-heavy Nasdaq 100 dipping 0.3 per cent.

“We’ve already had a lot of weak data from the US housing market, we’ve got weak consumer confidence data from around the world because of rising prices, and business investment tends to react to the consumer,” said Trevor Greetham, head of multi-asset at Royal London Asset Management.

Data released on Wednesday showed that Spanish inflation hit a 37-year high in June of 10 per cent, up from 8.5 per cent in May and well above economists’ expectations of 8.7 per cent. German consumer prices data will be released later in the session.

Bond yields, which move inversely to their prices, tend to rise in tandem with forecasts for interest rates and inflation. But market expectations of a possible recession have prompted a repricing in recent weeks.

After the Federal Reserve raised its main funds rate by an extra-large 0.75 percentage points this month, several of its policymakers argued for a similar-sized increase in July. The European Central Bank, which has experimented with negative interest rates to boost economic activity since 2014, is widely expected to lift its main deposit rate above zero by September.

Futures markets are now tipping the Fed’s benchmark interest rate to climb to 3.5 per cent by early 2023, down from estimates roughly two weeks ago of 3.9 per cent — signalling scaled-back expectations of the extent to which central bankers will lift borrowing costs.

“People fear how much demand could fall in this period where central banks are raising rates quite aggressively,” said Nitesh Shah, head of commodities and macroeconomic research for Europe at exchange traded fund provider WisdomTree.

“With higher recession risk, bonds can help your portfolio because you can price some rate cuts in coming years” added Guilhem Savry, head of macro and dynamic allocation at Unigestion.

Elsewhere in markets, Brent crude oil rose 0.5 per cent to $118.59 a barrel as worries about falling global demand were overshadowed by forecasts of a supply deficit as western nations ratchet up their restrictions on Russian exports.

In Asia, Hong Kong’s Hang Seng share index fell 1.9 per cent while its sub-index of technology shares lost 3.3 per cent.