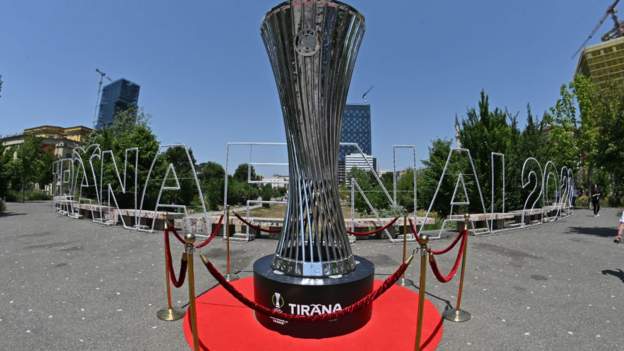 Ten police officers were injured as supporters clashed in the build-up to the Europa Conference League final.

Fans wielded glass bottles, sticks, stones and other objects as local police tried to break up trouble on Tuesday.

“Police have taken 60 people from both fan groups, 48 Italians and 12 Dutch, to the station,” the police said.

“As a result of the violence from the fans of both teams, 10 police officers were injured and a police car was damaged.”

Wednesday’s final – the climax of the first ever Europa Conference League campaign – will be played at Arena Kombetare, which holds 21,690.

Roma manager Jose Mourinho has said his club’s fans would have filled Real Madrid’s Santiago Bernabeu, which has a capacity of 81,044.

Roma and Feyenoord supporters are expected to watch the match in two fan zones and police said they have taken measures to prevent outbreaks of violence.